Watch a roundabout foil a driver fleeing from the cops

Jason Marker
Roundabouts aren't just improving traffic flow and confusing the elderly, the circular intersections are helping to fight crime now as well. A Michigan scofflaw fleeing from police was thrown for a loop last week when he entered a newly-built roundabout at 90 miles per hour and flipped his car.

According to WXYZ, on the evening of August 18 a police officer in Marysville, Michigan attempted to stop a tan Chrysler Concorde traveling north on Range Road with expired tags. At first, the driver of the Chrysler seemed to comply and activated his turn signal. Then, with no warning, he sped off in an attempt to escape the officer.

The chase was cut short in dramatic fashion after about four miles when the Chrysler approached the intersection of Range and Griswald to discover that it had recently been turned into a roundabout. Dashcam footage from the pursuing MPD cruiser show the fleeing driver hit the brakes coming into the roundabout, but it did him little good. The rear end of the car stepped out and bumped over the curb surrounding the traffic island. The car flipped on its side, slid into the center of the island and came to rest on its roof.

The driver and his passenger – Jeffery Sharp and Nichols Belkiewicz – both have sizable rap sheets and Belkiewicz has an outstanding warrant. Thankfully no one was injured in the crash, but both men are facing numerous charges including eluding, driving with a suspended license, and firearms charges. 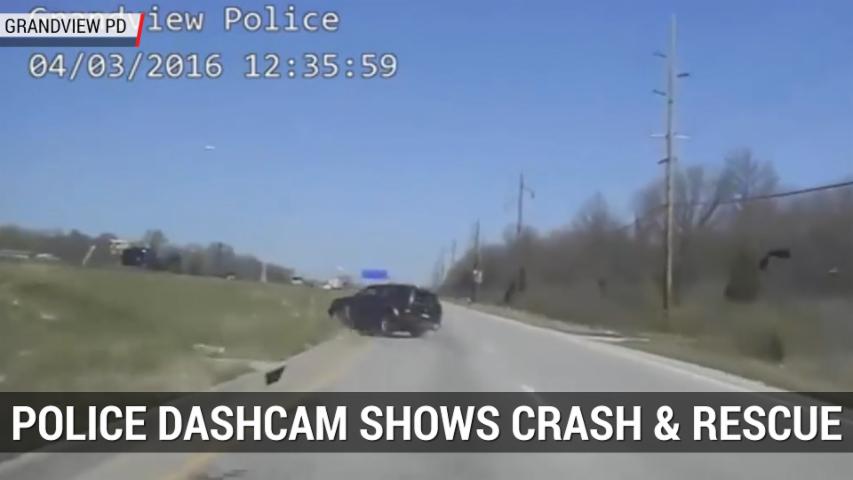