Let's put logic aside for a moment. Anyone attracted to the shape of a fastback crossover like this GLC Coupe is thinking with their heart, not referencing a spec sheet. Mercedes charges more for less here, with the GLC Coupe trading a little rear headroom and a lot of cargo space for its pretty roofline. When you put it like that, the GLC Coupe doesn't make sense.

But it doesn't have to. You might not be a proponent of the body style, and we get that. But it exists, we drove the latest entry, and, to be honest, it's charming. For someone who tracks most aspects of his life in spreadsheets, that's a tough thing to admit.

So how'd we get here? The industry has the BMW X6 to thank for the trend; that oddly satisfying duck, basically an angry X5 coupe, was followed by the smaller X4 a few years later, and Mercedes couldn't ignore the sales numbers. Benz entered the ring with its GLE Coupe this year and is applying the less space/more style formula to its midsize crossover for 2017. In GLC300 trim, it will come with standard 4Matic all-wheel drive and a 2.0-liter turbo four and is aimed at the X4 xDrive28i. There is no rear-drive variant as found on the non-coupe GLC300 crossover. A GLC43 AMG Coupe will launch alongside the fastback GLC300 by early 2017, and we're told that rumors of a future GLC63 AMG are to be believed. So, not rumors anymore, then. 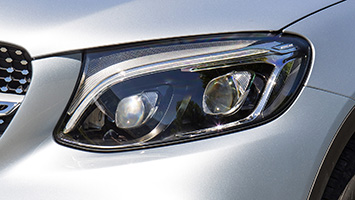 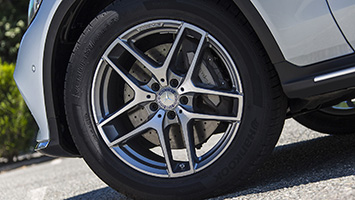 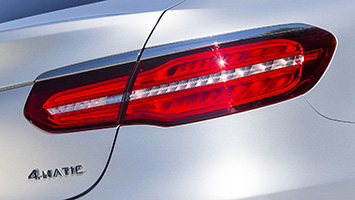 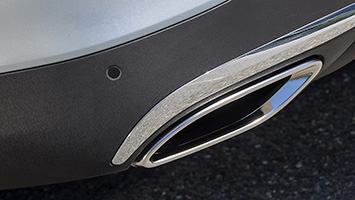 The roofline is the most obvious difference between the conventional GLC and the Coupe. For simplicity, the not-coupe GLC shall be referred to henceforth, in this review at least, as the GLC Box (™, patent pending, all rights reserved, and apologies but we needed a shorthand). Mercedes removes the Box's roof rails to further clean up the profile and splices in taillights that recall those on its actual coupes. There are some other mild stylistic changes, including a pretty diamond-textured grille and sportier fascias, because coupes are sporty. We don't have final US figures for interior volume, but suffice it to say they're lower here than on the GLC Box. Rear-seat passengers and cargo-area things take the big hit, while those in the front seats could be fooled into thinking they're in a vehicle shaped like a crossover, or even a C-Class sedan because the interior is carried over almost whole-cloth. The GLC Coupe is a few inches longer, slightly wider with the optional staggered tires, and has a roof height a bit lower than a GLC Box. This part's subjective, but we think it looks pretty darn good. Less boxlike, even. 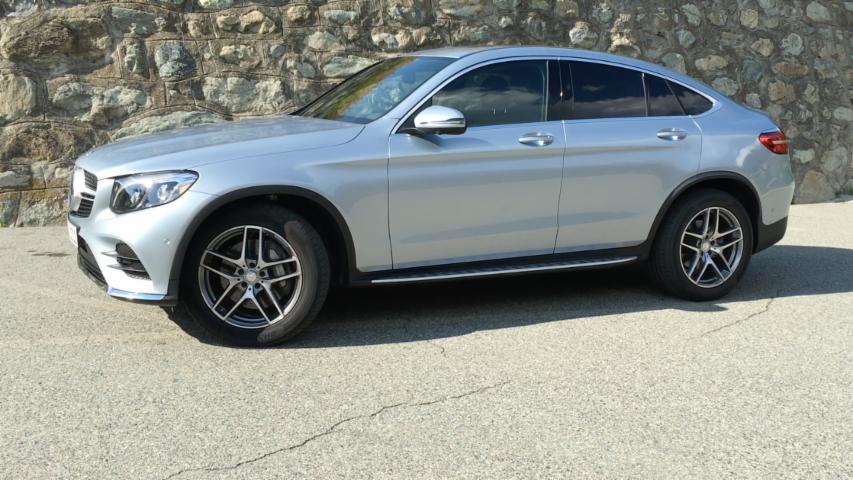 Although it ruins the sexy and stylish illusion a bit, the stock steel-spring suspension in the US will sit slightly higher than the same setup on European-market cars. We drove only GLC300s with optional Dynamic Body Control – steel springs with adjustable dampers – and there is also an Air Body Control suspension that will be available; both of the adjustable suspensions should have the same ride-height settings as their European counterparts, meaning if you pay a little extra the proper look is maintained.

Not that it has to, but the Coupe drives differently compared to the Box. This isn't a result of its altered shape, but because the engineers went out of their way to put space between the two dynamically. Both the Coupe and Box sit on a version of the latest C-Class platform; the Coupe has been tuned, and physics helps it, to feel somewhere between a C sedan and that other GLC. Just about everything in the chassis gets breathed on in some way; the steering is quicker, at 15:1 instead of 16:1 on the Box. The Coupe has bigger stabilizer bars front and rear, its suspension bushings are stiffer, and the programming (but not the parts) for the available adaptive dampers and air springs makes things a little stiffer, because that's sporty. And coupes, as we've said, are sporty. 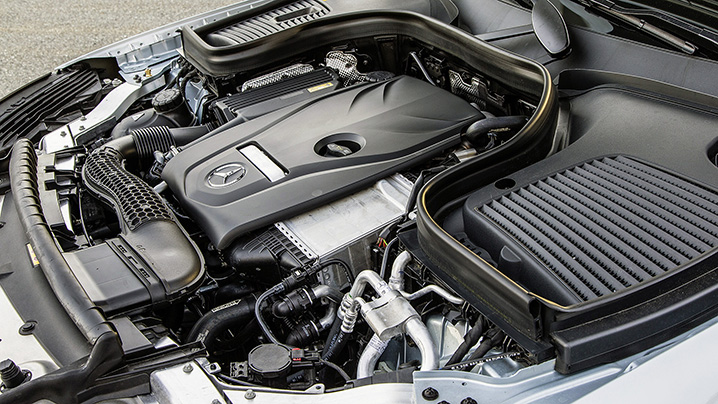 The programming for Comfort mode in a GLC Coupe aligns with Sport on a GLC Box, Sport with the Box's Sport +, and Sport + with the nonexistent Sport ++. So it's a level stiffer/tauter/quicker to react. That's great when you want heightened reflexes, but more practically means you lose the base comfort of Comfort mode. The difference is most noticeable for rear-seat passengers, those short likely people who get the short end of the stick.

Just as in the Box, the 2.0-liter four feels perfectly sprightly in the Coupe. Unlike some force-fed four-cylinders shoved into luxury cars, it's quiet enough in normal driving and even sounds kind of good when Sport mode is selected and the flaps open in the exhaust. The nine-speed automatic keeps the engine in its sweet spot pretty seamlessly; downshifts range from somewhat leisurely in Comfort mode to artificially clipped in Sport +, just as they should. Comfort mode makes sense for 95 percent of driving that will probably be done in this car, but Sport or Sport + make the Coupe entertaining enough to enjoy yourself on a twisty detour. 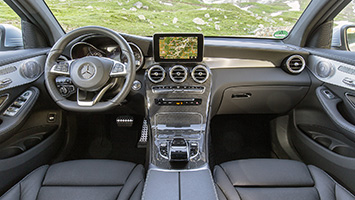 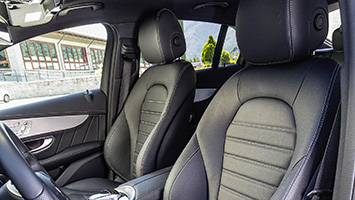 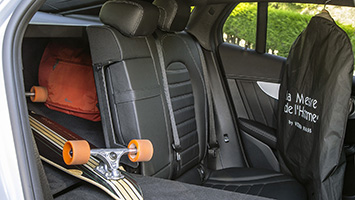 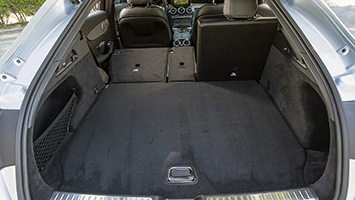 There are no new electronic gimmicks here, just the same well-filled-out list of features and options you'll find in a GLC Box. Benz's suite of near-autonomous tech is available, there are plenty of active and passive safety systems, and the interior is just as stunning as in the C sedan and GLC Box, although people (or fellow journalists) continue to complain about the look of the high-mounted center display. Our counterargument: If it were faired into the dash, the dashtop would rise and you wouldn't be able to see out the windshield.

Go ahead and turn the logic back on for a moment. We can live with the car's general compromises, but there's one we think would be a sore spot for anyone actually using the cargo area. To preserve the flowing look in the rear, the hatch doesn't cut into the bumper as deeply as it does on the GLC Box. This results in a several-inch lip that adds to the liftover height; the GLE Coupe suffers the same style-driven folly. Living with it means always lifting just a bit higher to get packages in and out of the back. You could sell it to your logical brain as a reminder to hit the gym more often. Problem solved. 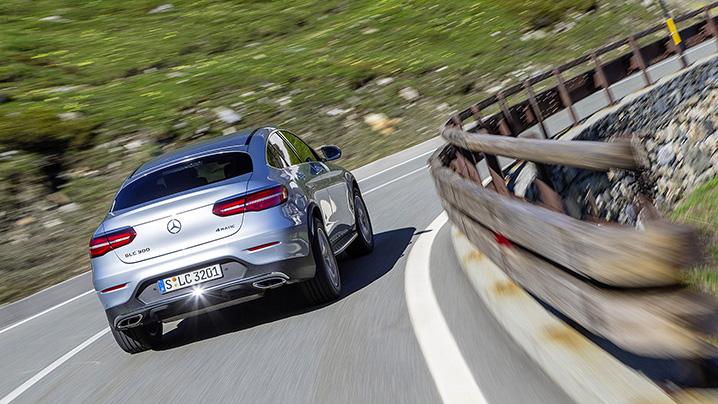 If you've gotten this far in the review, you're probably looking for a verdict. Paradoxically, that means the GLC Coupe isn't right for you – buyers choosing on style are unconcerned with the facts and figures, remember? If you're approaching this with anything bordering on logic, the GLC Box is the car for you instead, or maybe just a nice C-Class sedan, perhaps with 4Matic all-wheel drive if you really feel the need. We won't even attempt to try and sway you from an X4 if that's the one you want, because the decision must be based on looks. (The Mercedes is more comfortably tuned, able to tighten up when you want it to, whereas the BMW is more knife-edged all the time. And the Merc is simply more modern, plus it's pretty inside.)

We've established that crossover coupes are not the sensible choice. Coupe versions of perfectly nice sedans wouldn't exist if everyone was thinking on practicality alone, so why should it be any different with crossovers? You buy a funny-shaped car because you like its funny shape, and this is one genre-bender we can endorse. Take that, logic. 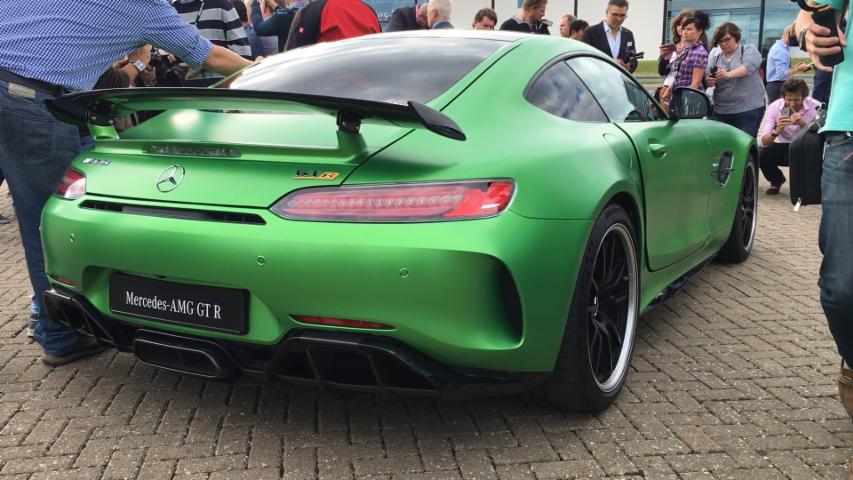