Eight things we learned about the 2017 Porsche Panamera We just spent two days in Germany with the 2017 Porsche Panamera, and now that we're back home in the States it's time for show and tell. The design is probably the most noticeable difference, but there is a lot going on inside and underneath this new Porsche sedan. Here are eight important bits worth talking about.

It's longer, wider, and taller than before.

We've already said that the 2017 Panamera is much prettier in person than its predecessor, and that's especially true from the rear three-quarter angle. There's a short flat surface at the tail below the rear glass, and the roofline over the rear of the passenger compartment was dropped by an eighth of an inch. Coupled with the new rear brake lights that are connected by an eye-catching light strip, those small detail changes make a dramatic impact on the car's overall appearance.

Physical buttons are quickly fading out of style, and the 2017 Porsche Panamera is the first vehicle from the German automaker that follows the trend. A sea of black plastic greets Panamera occupants, at least until the car is turned on. Then, the Porsche Advanced Cockpit lights up. Touch-sensitive controls abound for the driver and passengers both front and rear.

The Advanced Cockpit definitely cleans up the Panamera's interior compared to the mess of buttons inside the first-gen model. We haven't been given the opportunity to put the new cockpit through its finger-friendly paces, but we're sure that if you understand how to operate a tablet, you've got the basics down already. Here's hoping it's intuitive and easy to use without diverting too much attention from the road.

And wish a fond farewell to gauges (mostly).

There's only one physical gauge inside the Panamera (unless you count the analog timer atop the dash on models equipped with the Sport Chrono Package). A tachometer sits directly in front of the driver. In a nod to Porsches past, it's designed to invoke memories of the classic 356. Besides that one throwback, the instrument cluster is dominated by twin seven-inch digital displays that flank the lone dial.

From our brief time inside the cockpit, the digital gauges look clear and sufficiently high-res. Whether or not the LCDs are better than traditional dials we can't say, but there's clearly no stopping the forward march of progress.

It's hewn from aluminum...

Much of the chassis and all of the bodywork of the 2017 Panamera is aluminum. But there's still a good amount of high-strength steel in key structural areas, like the door jambs. That means Porsche had to devise clever ways of bonding the two disparate metals. One particularly interesting method involves spinning pointy screw-like fasteners at 6,000 rpm so that the surrounding metals melt and form a permanent bond, something similar to what Audi does on many of its cars. Another method involves injecting an adhesive full of tiny glass balls onto the aluminum and then crimping it and the surrounding steel together with high-pressure rollers. There are also rivets and more traditional screws.

But that doesn't actually make it lighter.

One of the major benefits to aluminum construction is reduced mass – aluminum is about a third of the weight of steel. So, any time an automaker can replace a steel part with one made from aluminum, we expect significant weight savings.

Thing is, the 2017 Panamera isn't actually any lighter than the first-gen car. The 2016 Porsche Panamera 4S weighed in at 4,123 pounds. The new one weighs exactly the same. Strip it down to its bare chassis, and there's no weight savings there, either. When we asked why, Porsche engineers said the new chassis is stiffer than the old one, and if it were made completely from steel, it'd be much heavier.

Another reason, though, is that Porsche isn't the only automaker under the VW Group umbrella with plans to use the MSB-F platform that Porsche developed for the new Panamera. Audi will use the architecture, too, and Audi required aluminum.

The new twin-turbo V8 is going to be great.

A brand-new twin-turbo 4.0-liter V8 engine powers the 2017 Porsche Panamera Turbo. Its 550 horsepower and 567 pound-feet of torque are generous, as is the impressively flat torque curve that plateaus between 1,960 and 4,500 rpm. For those keeping track, the 2017 Panamera Turbo is up 30 horsepower and 51 lb-ft compared to the previous version with the twin-turbo 4.8-liter (but still 20 hp and 23 lb-ft shy of the current Turbo S). It's obscenely quick; 60 mph is dispatched in a scant 3.2 seconds when equipped with Sport Chrono, or 3.4 without. We heard it rev and it sounded glorious. If you want maximum power, you'll have to press the Sport Response Button on the steering wheel.

Porsche engineers wedged the turbochargers in the V of the engine. This isn't any kind of new breakthrough, but it's a first for Porsche. There are numerous benefits to this central turbo layout, including quicker throttle response and a lower center of gravity.

But the V6 isn't a bad choice, either.

It sounds like the Panamera Turbo will be overpowered (in the best way possible). But looking at the numbers, we're thinking the twin-turbo V6 of the 2017 Panamera 4S is going to be more than adequate. The 2.9-liter engine puts out 440 horsepower and 405 lb-ft of torque between 1,750 and 5,500 rpm. That means it makes peak torque earlier and for a longer period than the V8. The 4S sprints to 60 in 4.0 seconds (4.2 without Sport Chrono) and carries on to a top speed of 180 mph. Not too shabby.

What's more, opting for the V6 saves 275 pounds over the V8-powered Turbo. That's a significant hunk of weight, much of which is positioned over the front axle. Here's hoping that translates into a dynamic advantage. Both the 4S and Turbo boast standard all-wheel drive and an eight-speed PDK transmission.

It's built in Leipzig alongside the Cayenne and Macan.

Porsche builds the Panamera in Leipzig, Germany. It shares the facility with the Cayenne and Macan, and all three vehicles roll down the same final assembly line. Workers are trained to build these three disparate model lines simultaneously, which boosts overall efficiency and reduces monotony.

For the full Porsche experience, we'd suggest you opt for European delivery. You'll see your own car get built, witness some of Porsche's awesome history in the attached museum, and even have the opportunity to drive on a sweet racetrack. We took some laps on the Leipzig circuit with an in-car camera firmly affixed to the windshield, so if you can't make it there yourself, at least you can see what you're missing in the video below. 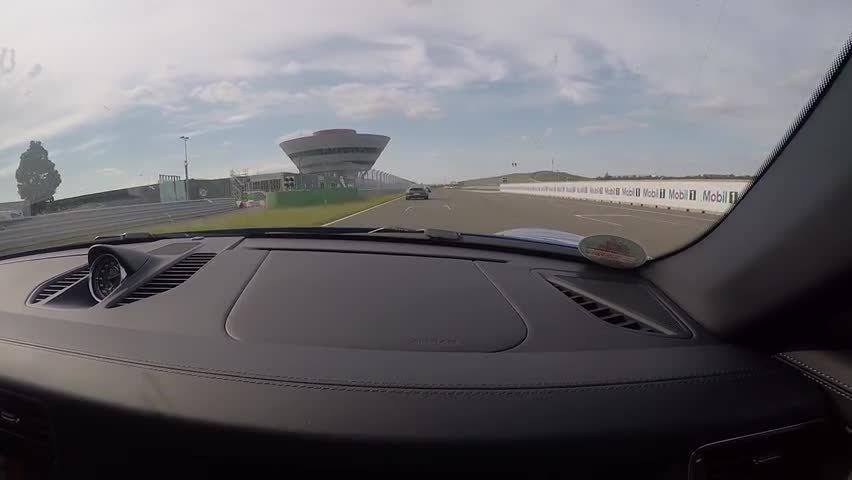