It's the exception that proves that fun rules. Competition has forced the 911 GT3 RS to prioritize lap times over driving enjoyment. The 911 Carrera line has softened, now full of GT cars rather than the wild children of yore. Turbocharging is hitting the rear-engine Porsche en masse. All of this gave Porsche Motorsport a vacuum of emotion and purity to fill with just 991 examples of its glorious 911 R, a machine focused on putting unadulterated feel and enjoyment back into driving.

Even amongst the diehard Porsche fraternity, just going faster doesn't work for everybody. They don't all want the thrill that comes from a high-downforce car running out of grip inches from a concrete wall. Not everybody loves suspensions so tied down that the slightest bump threatens the front splitter's continued existence. And many don't love turbochargers or want a computer to shift gears for them. Fortunately, just such people live, breathe, and work at Porsche Motorsport.

This part of the company makes its living building Porsche's fastest machines, like the Cayman GT4 and the 911 GT3 and GT3 RS. But in an era when the bulk of Porsche's profits come from SUVs, Porsche Motorsport also sees itself as the guardian of the parent company's soul. Motorsport has enough pull that when it tells Porsche's board it needs a car like the 911 R the board listens. 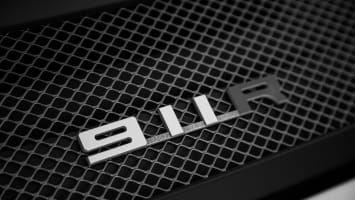 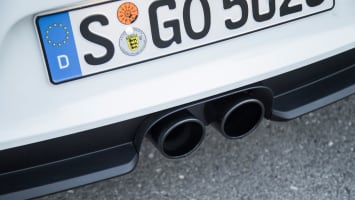 The quickest way to turn the 911 into a driver-connected car was to pull the weight out, and the easiest way to do that was to use the 911 GT3 RS as the basis. So it gets that car's magnesium roof, polycarbonate side and rear glass, carbon-fiber bonnet and front fenders, and lots of aluminum. The air conditioning got thrown out (you can pay to put it back in), as did the multimedia screen (ditto), the audio and navigation systems (ditto, ditto), the rear seats, and even the interior door handles. Cloth straps replace the latter so you can still get out of the car. At 3,020 pounds, the R is 110 lighter than the race-bred GT3 RS.

Eschewing turbocharging in the interest of car-lover must-haves like induction noise, butterfly chirps, intuitive throttle response, and purity of sound, the 911 R simply borrowed the GT3 RS's 4.0-liter flat-six. So there's 500 horsepower of engine playing for keeps, the car ripping to 60 mph in 3.7 seconds from a standing start, hitting 124 mph in 11.6 seconds, and continuing on to 201 mph thanks to the lack of a monster, drag-inducing rear wing.

The dry-sump engine revs and revs and feels like it wants to keep revving forever. It reaches peak horsepower at a soaring, wailing 8,250 rpm, though it will keep climbing to 8,500, shoving hot air through its titanium exhaust. The peak torque figure of 338 lb-ft doesn't look big in the turbo era and it also chimes in relatively late, at 6,250 rpm, but the rotational inertia of the oily bits is incredibly low and can be made even lower by choosing the optional single-mass flywheel. Porsche has kept the GT3 RS's dynamic engine mounts, which it uses to keep movement of the rear-mounted engine from upsetting the car's attitude mid-corner.

This car makes no apologies for its ugly fuel-economy number because, well, there are more economical 911s you can choose from. In European testing, it consumes 13.3 liters/100 km, which is equivalent to 18 mpg; EPA fuel economy figures aren't available yet. One of the big reasons for the thirst is the sheer power and revs the engine generates, but the other is the six-speed manual gearbox, which Getrag built especially for this car. Fifth gear is underdriven and sixth has a ratio of 0.88 to one, which is between fifth and sixth on the 911's seven-speed manual. There's no freeway-hauling ratio because, Porsche Motorsport insists, six speeds are better for fun and, besides, culling the extra-overdriven seventh gear saves a whole 2.2 pounds. 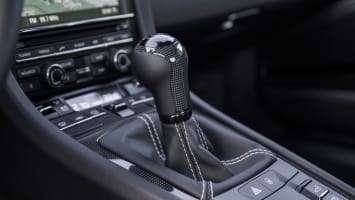 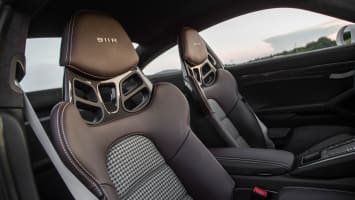 Porsche mates this custom-made gearbox to a mechanically locking differential with torque vectoring; the car also gets custom-tuned rear-wheel steering and unique electric power steering software code.
The look is more standard than that of the wild-tailed GT3 RS, until you start to examine it closely. The frunk badge has been thrown out in favor of a lighter sticker, the front splitter is deeper than usual, and there's a flat floor and an underbody diffuser the size of a commercial barbecue under the tail, which does its best to take over where the slightly stretched 911 Carrera spoiler runs out of push.

The whole thing is managed via three pedals and a bespoke 14-inch leather-bound steering wheel with no buttons whatsoever. The console has some switches to adjust the throttle response, stability control, and traction control, and to turn the exhaust note up or down. And that's it.

The result is something very special. It's like Porsche took all of its latest go-faster technology and tuned it backwards until it fell into a feedback sweet spot.

The engine cranks over with an angry gruffness and, dynamic mounts active or not, it can leave the 911 R sitting there with the body rocking left and right at idle. The almost non-existent sound deadening allows the 4.0-liter six to go well beyond delivering noise. Every single tremble from the motor instantly snaps at nerves in the fingers, toes, and anything else inside.


The final 2,500 rpm or so are unfettered, incandescent, screaming rage.

As you drive, you realize you're sitting in front of not one engine, but three of them lurking in one piece of alloy. First up is the commuting engine, which softly but strongly pushes the car around in traffic at up to 3,500 rpm, and it's surprisingly good at it.

Then the engine's valving hits the Man Cam at 3,500 rpm or so and it changes timbre and depth, becoming a Porsche flat-six of legend, full of metallic rasp and urgency, and governed by a stiff throttle spring. It's strong enough to live here most of the time, and it's nice enough to use the torque peak as a de facto power peak, because it's still going to be a pretty quick car like that. And you won't miss out on any of that honeyed creaminess of the engine's power delivery, its glorious induction noise, the chirping of its throttle bodies as they open to full throttle, or the timbre changes as the revs rise.

But then the thing rips past 6,000 rpm and it all changes. Civility and sophistication disappear. The final 2,500 rpm or so are unfettered, incandescent, screaming rage. This doesn't sound like a flat-six Porsche anymore, doesn't sound like a V8 or V12 either. It just sounds like a charging pre-gunpowder army, concentrated into one 4.0-liter ball of fury. Somehow this magnificent piece of mechanical theater doesn't overshadow the rest.

The gearbox almost does, with beautifully short throws that slot home positively and quickly. It's almost shamefully revealing to use it, a wonderful piece of sublime intimacy. You find yourself shifting again and again, just for the pure fun of it.

Where the GT3 RS is all glued-down precision on a race track, the 911 R's cleaner profile means that it moves around a lot more without feeling unstable – the 911 R has a way of making sure you expect everything it's about to do. The softer springing and damping allow you to discern the car's rear-engined layout more than in the racers, and there's enough vertical compliance in the suspension to bring back some of the classic 911 walking-around feel. 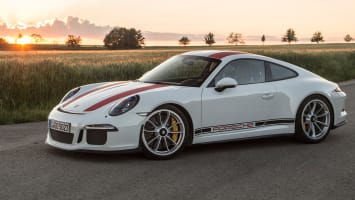 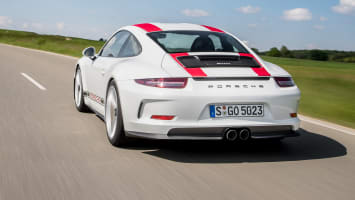 While it's good, the electric power steering system isn't quite as old-school, especially at low speeds where it's accurate and light but lacks that meandering quality of early 911s. Instead, it seems like Porsche Motorsport focused on making sure the steering gave its best at the edges of its stupendous grip levels.

That grip comes from the Michelin tires, which measure 245/35ZR20 front and 305/30ZR20 rear. The custom rubber is stuck in place by center-lock wheels, and it is brilliantly communicative, though not quite so effective in the wet. For tires that bite so hard, they also give a wonderful sense of progression and instill the confidence to easily bring the car back when grip runs out.

Being softer makes the 911 R a nicer proposition on a winding mountain pass. It's not the point-and-shoot exercise of the GT3 RS. Instead it flows, it oozes, and it flits its way from apex to apex, and you almost wish it would do it all slower just so you can enjoy how each corner feels for longer. Almost.
Nailing apexes at speed in the 911 R demands more of you than in the fastest 911s. It asks for more accuracy in the way you use the carbon-ceramic brakes, it demands more precision from your throttle inputs and insists on steering corrections all the way through the corner. Eventually, the 911 R will understeer before you realize that it's so precise a tool you can drive it on the nose or the tail, or both, and you can do it all in the same long corner if you want to.

You don't have to drive flat-out to get enjoyment form this car, either, because the 911 R immerses you in its every breathing moment, whether you're at 2,000 rpm or 8,000. It's happy to just be moving and you can't escape the glow of that glee.

If that all sounds a bit much, it's not. This car is intuitive. The 911 R delivers that special, rare feeling of the driver being utterly at one with every piece of the machine. You release the brake pedal like it's part of your foot, tweak the wheel like your hand is touching the surface of the road, accelerate away with a throttle pedal that knows the difference between 6,201 rpm and 6,202.

This is the Porsche that lives up to Porsche's hype. If you love driving (and you can find one), this is the 911 to own, cherish, and hold onto until the last drop of the world's gasoline is burned in its naturally aspirated flat-six. 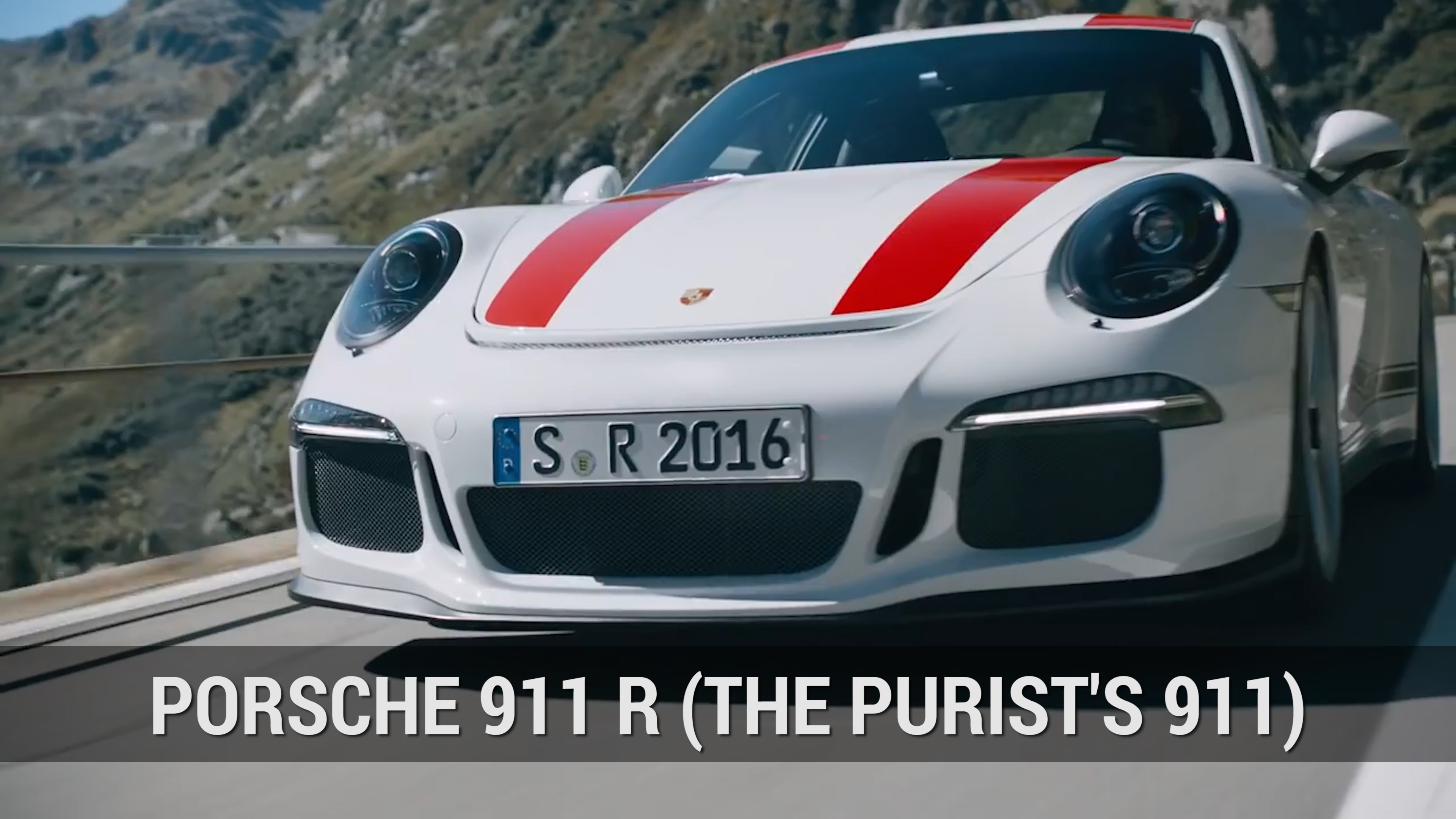