Slimmed down for summer. We're in the midst of the Second Great CUV War, and the crossovers are winning by a lot. Compact sedans are being hauled around the side of idled factories and unceremoniously shot. FCA, whose be-sweatered CEO is either omnipotent or a troll of the highest order, is organizing a last stand around profit-dense SUVs and trucks on the off chance that gas prices don't rise ever again. It's the tall wagon's finest hour, and GMC is hoping the new Acadia will capture a share of the glory.

The old Lambda-platform Acadia was introduced in 2007, leading the full-size, three-row crossover charge that spawned a quartet of semi-indistinct variants, including a Saturn. (Remember Saturn?) These four were truck-like in heft and capabilities, but lighter and better-mannered than their body-on-frame counterparts – and with an unusually stout 5,000-pound towing capacity. The Lambda siblings bombarded established beachheads on the sales territories occupied by minivans and truck-based SUVs. Last year, GMC moved nearly 100,000 Acadias in the US, the best year ever for the model.

Now GMC shows up with a deflated Acadia for 2017, 7.2 inches shorter overall, 3.5 inches narrower, and with a 6.4-inch-shorter wheelbase. The company has even carved something like 700 pounds out of its previously portly unibody, mostly due to the size reduction but also through an increase in the percentage of high-strength steel and the use of lighter soundproofing materials. GM's C1XX platform was launched with the Cadillac XT5 earlier this year, and this GMC version is the second to appear. There's even an available four-banger, but more on that in a bit. What remains to be seen is whether the downsized Acadia represents a leaner, meaner fighter or if GMC is sending it into battle hamstrung. 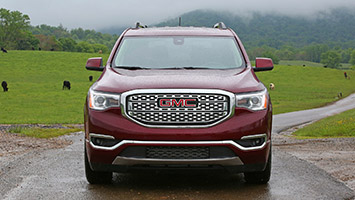 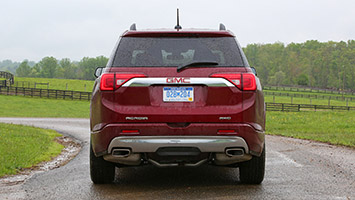 Outside, the new Acadia is stealthily innocuous. Gone is some of the lozenge-ness of the outgoing Acadia, but don't fret about it standing out from the crowd. The overall styling falls into lockstep with the Sierra and Canyon. The cut of the rear window, with an upsweep at the trailing edge, emulates the brand's mid-sized truck offering. A chrome mustache cuts across the front fascia below the grille, and there's more brightwork around the front side windows and at the crease below the scallop in the doors. The taillights are more contemporary than before, with an attractive elongated C element comprised of LEDs.

The cabin is pitch-perfect for this quasi-premium CUV, with comfortingly familiar GM switchgear embedded in high-quality, inoffensive materials. It's like a hotel room at an upscale major national chain. You appreciate that it's comfortable and clean ("Hey, this place is nicer than it was in the photos online!"), but after you check out you really can't remember what the bedspread looked like, or if the carpet was red or tan. Just like the exterior, it won't offend but also won't endear. At least it's a massive improvement over the outgoing Acadia's dated expanses of hard plastic and too-prominent HVAC vents. While the Denali trim is even nicer, with a unique gauge cluster and soft, rich leather, it's not as avant garde as the XT5's impressive cabin – nor should it be.

Seats! These are important in a three-row, and the Acadia offers several configurations. There's the five-seat setup, but that's only available in the special All-Terrain sub-model which we'll get to shortly. The other Acadias offer a two-place third row and either a pair of thin, minimally-contoured captain's chairs or a three-across bench for the second row. While there's undoubtedly less shoulder room than in the old Acadia, the remarkable thing is that you can fit a not-exceptionally-sized person in any of the places and they'll be comfortable for a not-insignificant amount of time. That period of time increases drastically as you head towards the bow of this ship. 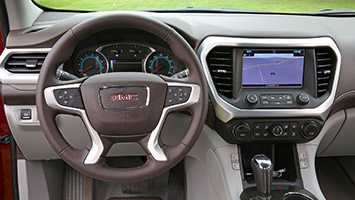 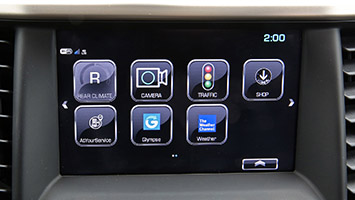 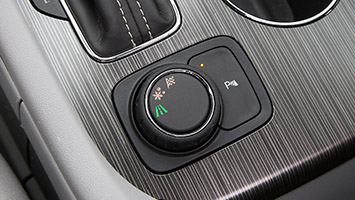 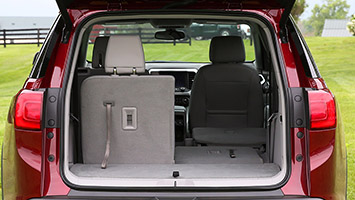 The second and third rows fold flattish, and that's most of the reason there's not much contour to them. The second row drops with a yank of a lever; the third row requires a yank on a pull cord and a push to the seat back to coax it to a horizontal position, which is a two-handed operation. Access to the third row won't challenge the flexibility of anyone who'd fit back there. Fold everything flat and you could probably fit a dorm room's worth of flat-pack furniture inside.

Once you're loaded up and moving, you'll probably appreciate that the 2017 Acadia brings modern active safety features to the table. A suite of technologies is standard, including front pedestrian braking, a Surround Vision camera system, lane-keeping assist, lane-departure warning, and front and rear parking assist. Low-speed forward automatic braking is standard on the SLT-2 and Denali trims, and a more robust forward automatic braking system is available on Denali. You'll also appreciate the revised infotainment system, which supports Apple CarPlay and Android Auto, and also displays an available Tow Vision Trailering view that helps Acadia owners line up their hitches with a trailer.

The previous GM three-rows were V6-only, but in this generation the base Acadia will offer an inline-four – the same unit seen in the cut-rate ATS base trim and the last-generation Chevrolet Malibu. This 2.5-liter employs variable valve timing to produce a completely adequate (honestly!) 194 horsepower and 190 lb-ft of torque. It's backed up by a six-speed automatic, which needs a couple of downshifts to produce enough grunt to pass a truck or make it up a slight grade. It's not underpowered in the least, but it's breathing harder than an asthmatic pug to provide motivation that's sufficient but underwhelming.

Despite having an order of magnitude more power and torque, the V6 simply moves the needle from adequate to more adequate. Some of the blame goes to gearing and shift mapping, which puts fuel economy above all else. The direct-injection six cranks out 310 hp and 271 lb-ft of torque, and so the V6 builds speed with more authority than the four without much drama, good or bad. The additional power and torque really come into play on inclines and should make a big difference when towing or heavily loaded with cargo. The V6 models have a slightly upgraded six-speed 6T70 transaxle, which was incidentally co-developed with Ford and used in a number of that company's crossovers and sedans. The V6 is offered in both front- and all-wheel-drive flavors, and comes standard on all but the base front-drive model. 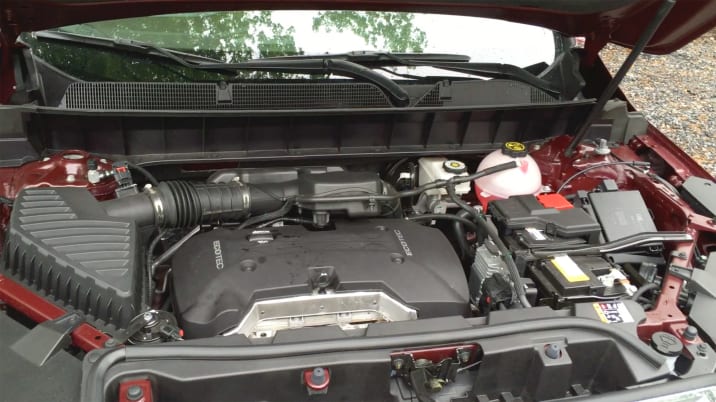 Normal Acadias have a conventional suspension setup, with MacPhersons up front and a five-link independent rear arrangement. The Denali employs a continuously variable damping system supplied by ZF. Both systems seem to work fine. I spent time in both a well-equipped 2.5-liter model and a Denali, and both rode and handled much like tall, heavy mid-size sedans. Roll was particularly well-controlled – there's no head whipping in sudden transitions – and bumps merely make their presence known in a diffuse, distant way. Like the styling, the ride aims to please most and alienate none, and succeeds admirably.

One sub-model stands out: the Acadia All-Terrain, which slots in right under the top-of-the-line Denali in terms of cost and content. Don't confuse that with the GMC Terrain – or at least, try not to. There are two notable differences (aside from some cosmetic ones) between this Acadia and the rest. The first is what GMC calls Active Twin Clutch, a slightly different AWD system that uses two clutch packs in the rear differential. Each can handle up to 1,100 lb-ft of torque, and the differential can transmit power from wheel to wheel without relying on cutting power or applying individual brakes. The conventional AWD system on other Acadias uses a simpler differential with a single clutch pack. We didn't get to drive the All-Terrain model in any situations that allowed us to discern any advantages of its more sophisticated system.

Both all-wheel-drive systems employ a neat trick: a driveshaft that can decouple from the transaxle when the driver locks the Acadia in front-drive mode. This seemed like a lot of complexity for what was probably a limited efficiency gain, so I cornered Vehicle Performance Manager Larry Mihalko for the down-low. The number he gave me was smaller than I imagined: it's only good for a 0.5-mpg gain, roughly. Why employ this gadget at all? Mihalko gave me a look. "There's no low-hanging fruit left," he said. Engineers poke and prod the vehicles for every gram of weight loss or efficiency improvement that may help meet federal standards. If a half-mpg gain helps sell some increased number of Acadias, according to some GM formula, then the tech goes in. The driveshaft decoupler passed the test. 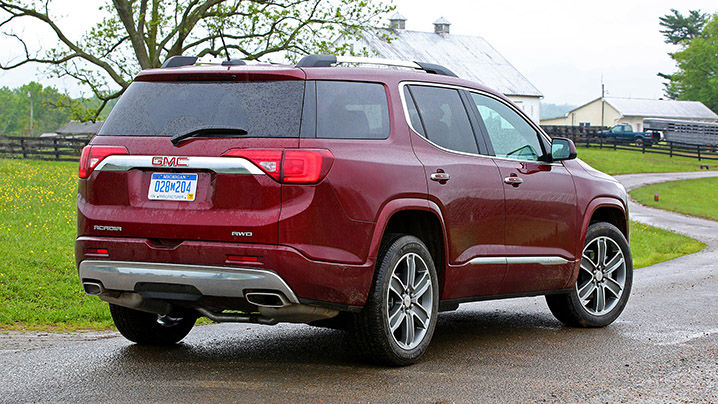 The second, slightly less involved change is that the third-row seat is deleted on this model. GMC says this is a nod towards existing owners who said that they tow often with their Acadia but would rather have more cargo capacity behind the second-row seats than the ability to carry more (small) people. The All-Terrain also throws in some handy rails and cargo dividers to keep stuff in the back secured.

Speaking of capability, towing capacity is down to 4,000 pounds in the V6 models. That's slightly more than the new Honda Pilot offers, unless it's optioned with an transmission cooler, 1,000 less than the Toyota Highlander, and significantly less than the Dodge Durango/ Jeep Grand Cherokee cousins. The new Acadia, like the last one, is still a decent compromise if hauling people is the main concern and towing a toy is an occasional necessity. Don't buy the I4 if you'd like to tow, though – its meager trailering capability is only half a ton.

Now that we've established the order of battle in the Crossover Wars, it's time to decide if GMC has built a war rig worthy of consideration. The least-equipped Acadia starts at $29,995, the All-Terrain at $40,040, and the Denali AWD at $47,845. That pricing spread puts it on par with competitors like the Honda Pilot and Jeep Grand Cherokee, although both of those have much more power from their base V6s at $30k compared to the similarly priced base four-cylinder GMC. The Toyota Highlander offers a less-powerful inline-four base model at a similar price, and the Acadia beats it by 1 mpg in both city and highway ratings. In a V6 head-on comparison against all three of these competitors, the Acadia offers similar fuel economy and more power.

Without an advantage in materiel, the Acadia is going to have to win this war with volume. Considering how well the previous Acadia was selling as a lame duck, and that the 2017 Acadia improves upon its predecessor in all the right ways, it's going to put up a hell of a fight. 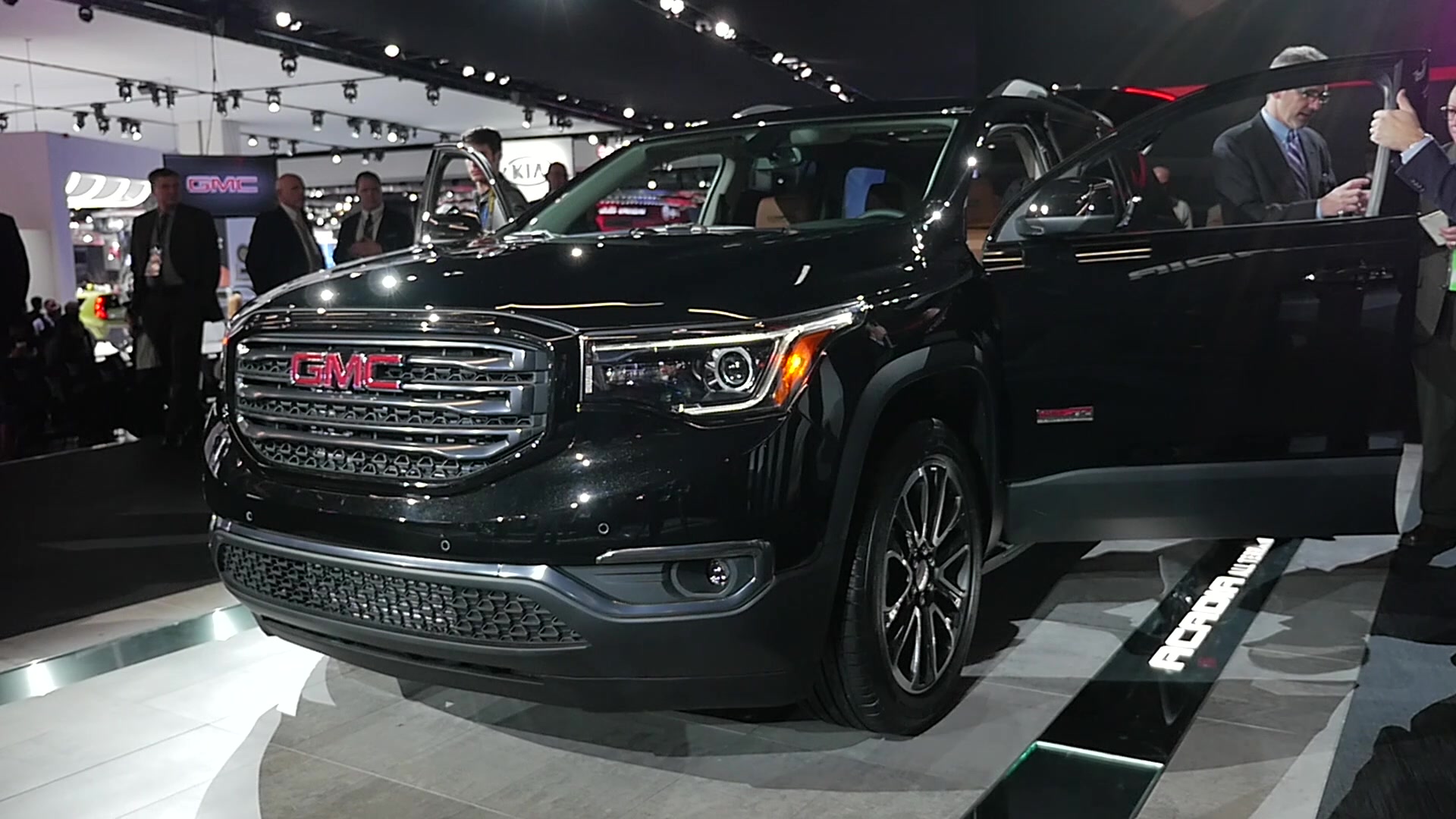