Pete Bigelow
Autonomous minivans are coming. Preparing them for use on public roads will be as much a legal hurdle as a technical one. Days before Google announced its partnership with FCA to build fully autonomous minivans, the tech giant embarked on another collaboration with automakers, one aimed at addressing the legal and regulatory quandaries that may hinder the deployment of these cars.

The Self-Driving Coalition for Safer Roads marks a collaboration between Google and four other companies that will lobby regulators and lawmakers on behalf of the burgeoning autonomous business leaders. In addition to Google, the group includes Ford, Volvo, Uber and Lyft. More companies could join soon.

"I do think some of the things we talk about with self-driving vehicles will be more appropriately dealt with in a clean sheet of paper in terms of testing and standards." – David Strickland

"The roster will broaden, no doubt," said David Strickland, former administrator of the National Highway Traffic Safety Association who is the new coalition's chief counsel and spokesperson. "The goal is to have a broad-reaching group of stakeholders from the companies working on the technology in any scope to groups that represent the disabled and transportation planners. You really need to have a broad base of voices to discuss and advance self-driving."

Notably absent in the current ranks of membership is FCA, which will build 100 Chrysler Pacifica hybrid minivans in its partnership with Google. But that could change. "We are exploring whether formal membership in this coalition is appropriate," an FCA spokesperson said Thursday.

Should Chrysler join, it could find itself immersed in a rapidly evolving legal landscape. The Department of Transportation undertook an evaluation of the regulatory environment for self-driving cars in January with the expressed intent of doing whatever it can to accelerate the arrival of autonomous vehicles. That may include a review of federal motor vehicle safety standards that mandate cars contain things like side-view mirrors, steering wheels and brakes – items that some industry leaders consider irrelevant in an autonomous era.

Rather than tinkering with and reworking those current standards, Strickland (pictured below) advocates for the creation of an entirely different class of FMVSS standards that would address self-driving cars.

"I do think some of the things we talk about with self-driving vehicles will be more appropriately dealt with in a clean sheet of paper in terms of testing and standards, rather than trying to shoehorn it into the existing FMVSS," he said. 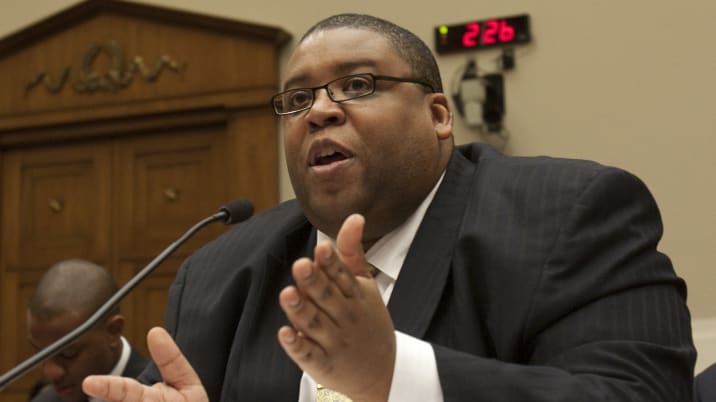 He said the federal government could take a similar approach to the one it took with golf carts operating in retirement communities and similar low-speed vehicles, for which an entirely new branch of rules were created under the standards. "The pathway would be very similar to the low-speed vehicle category," he said, "although I'm not sure that entirely fits for self-driving vehicles, because low-speed vehicles were not meant for vehicles on public roads, where self-driving vehicles will be part of the overall vehicle mix."

Strickland knows more than most about nuances of the federal statutes. As NHTSA administrator, he helped write the agency's first policy statement on self-driving cars in 2013. But those were geared toward testing, and now many automakers foresee cars with autonomous capabilities reaching the market by 2020. On Thursday morning, General Motors and Lyft detailed plans to test a fleet of autonomous taxis on public roads within the next year.


"We're talking a very short period of time, a period of years, to commercialization and deployment." – David Strickland

"The world is so different than when I was the administrator," Strickland said. "At that point, everyone approached it as testing and was fleshing it out in an experimental mode. As you can see, we've moved well beyond that, and we're talking a very short period of time, a period of years, to commercialization and deployment."

It's not only federal standards that the Self-Driving Coalition for Safer Roads will address. California has issued preliminary rules that would require licensed drivers to operate autonomobiles and that cars contain controls that would allow humans to take over in an emergency. Twelve states have enacted laws that address autonomous vehicles, and 19 other states are considering such legislation, according to a Stanford University group that tracks autonomous-related legislation.

Companies like Google consider the adoption of state-by-state laws a patchwork approach that will complicate their efforts to bring self-driving technology to the market. At the extreme, laws that change from one state line to the next could confine vehicles to legal operations in only one state – something that could hinder their usefulness.

"With widely varying laws, you're going to end up slowing deployment," Strickland said. "The hope is, as part of NHTSA's work, to model laws that make this more consistent. ... We recognize you can have variance in traffic laws, and you can't expect complete harmonization – not every state allows rights on red. But it's the major things – whether a vehicle can or cannot be deployed – that has many peoples' attention."