Would you pay Lamborghini Aventador money for a Countach?

Three used Lamborghinis are estimated to each be worth an Aventador.

Noah Joseph
This pair of Lamborghini Countaches going up for auction at Silverstone are both anticipated to sell for around £300,000, which is equivalent to over $400,000. For that kind of money, you could buy a new Aventador – which only goes to show that supercars like the ones we had posted on our childhood bedroom walls are coming of age, and that some members of that generation have evidently done better financially than others. 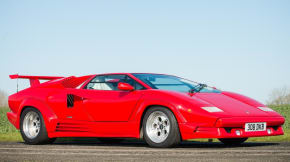 The red example is a 25th Anniversary edition, arguably the ultimate version of the Countach with all its squared-off vents, slats, and miscellaneous aerodynamic appendages. This particular example belonged to Cleo Roberts, wife of Carroll Shelby, and it's the first time it's going up for sale in 16 years.

Joining it is an earlier Countach 5000 S in white that once belonged to a Saudi Prince. This variant was even more rare than the 25th Anniversary edition (with 320 made versus 627), boasts royal pedigree, and recently underwent a thorough restoration. So even with more miles on the clock (30,000 versus 8,000), it's expected to bring in slightly more once the two cross the auction block at the famed British racing circuit later next month.


Show full PR text
PAIR OF SPECIAL LAMBORGHINIS COULD BE YOURS

The first of the two examples is a 1989 Lamborghini Countach 25th Anniversary edition, one of just 627 made to celebrate Lamborghini's 25th birthday, and the most refined and powerful version of the Countach produced before it was superseded by the Diablo.

Designed by none other than Horacio Pagani, creator of the iconic Zonda, the 25th Anniversary edition features bespoke wheel arch extensions, extended air intake ducts and a new rear engine cover design, as well as increased torque and performance with a top speed of 185mph.

Now offered for sale for the first time in 16 years, this particular right-hand drive example was previously owned by Cleo Roberts, who went on to become the wife of legendary automotive designer, racing driver, and entrepreneur Carroll Shelby.

This highly collectible Lamborghini is expected to achieve £250,000 to £300,000 at auction having covered just 8,000 miles from new, and is presented today in excellent condition and finished in its original colour combination of Rosso with Bianco leather.

"A supercar with provenance associated with Carroll Shelby is a very intriguing thing. This car has a special past, which makes it even more desirable to collectors and enthusiasts," explains Silverstone Auctions managing director Nick Whale.

Also offered is a rare, right-hand drive 1983 Lamborghini Countach 5000 S of royal heritage. As one of only 320 examples made, a handful of which were right-hand drive, this particular car was supplied new to Prince Salman Bin Saud Bin Abdulaziz Al Saud through Lamborghini London, and spent five years in his ownership in Saudi Arabia.

First registered in the UK in 1988, this car was then stripped and restored by Lamborghini expert, Mike Pullen. Acquired by the current vendor in January 2009, it has undergone a £60,000 restoration and been kept in a bespoke, heated and dehumidified storage facility in Mallorca.

"We're no stranger to Lamborghinis at Silverstone Auctions having sold some of the best available on the market this year, and the Countach always draws impressive glances", adds Nick Whale. "It is a truly incredible supercar and to have two examples in the May Sale, both with great provenance, will make for a highly anticipated auction indeed."

To find out more about the Lamborghinis for sale and other best of breed classics and modern sportscars for auction, visit http://www.silverstoneauctions.com/the-may-sale-2016.