Pete Bigelow
Ford has gained a big advantage in one of the most competitive segments in the auto industry.

The company's F-150 SuperCab was the only one of nine pickup trucks tested by the Insurance Institute for Highway Safety to earn a "good" rating on an influential new crash test. The vehicle joins its SuperCrew sibling as the only large pickups to earn the organization's "Top Safety Pick" award when equipped with a collision warning system.

"Ford is leading the way among large pickup manufacturers when it comes to protecting people in a range of crashes and offering technology to warn drivers of imminent frontal crashes," said Raul Arbelaez, vice president of the IIHS Vehicle Research Center.

This is the first time the overall pickup class has been put through the new small-front overlap test, which evaluates how vehicles withstand crashes in which their front quarters strike a fixed object. Except for the F-150, all the pickups allowed moderate to severe intrusion of vehicle structure into the cabin, putting occupants at risk for injuries.

The worst-performing pickups were the Ram 1500 Crew Cab and the Ram 1500 Quad Cab, according to the IIHS. Both earned marginal overall ratings on the test and poor ratings for structure. Force from the crash pushed the door-hinge pillar, instrument panel and steering column back toward the crash-test dummy. In the worst cases, intrusion reached 16 to 17 inches, according to test results.

"Drivers in these pickups would need help freeing their legs from the wreckage following a small overlap crash," Arbelaez said. "We encourage manufacturers to redesign their pickups to resist intrusion in the lower occupant compartment to safeguard people from serious leg and foot injuries that might require months of rehabilitation." 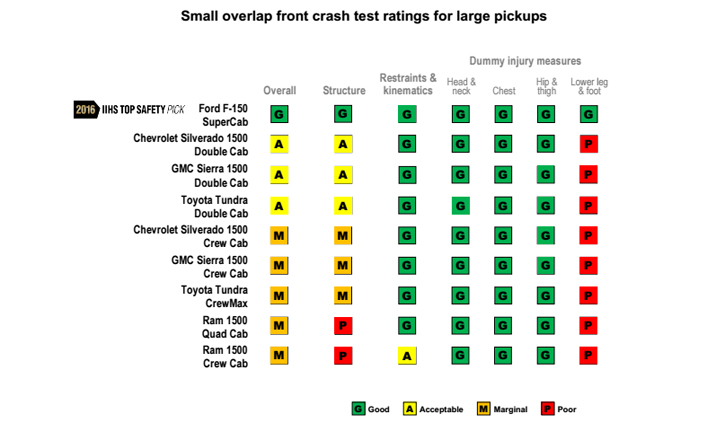 Aside from perhaps the Ford Mustang-Chevy Camaro rivalry, there's no bigger competition between Detroit's Big Three than on pickups. The F-150 is the best-selling vehicle in America, racking up more than 186,000 sales so far in 2016. Chevy has sold 128,965 Silverados through March, and Chrysler has sold 113,367 Rams. Results from the IIHS test could further help differentiate the pickups in the eyes of consumers.

For the F-150, the test results represent a turnaround. Although the IIHS has never tested pickups en masse before, it did test the '15 SuperCab alone, and it received a "marginal" rating. "We commend Ford for taking last year's results to heart and upgrading protection for SuperCab occupants in small overlap crashes," Arbelaez said.

The small-front overlap test is one of five administered by the not-for-profit IIHS, including a moderate overlap front, side, roof strength and head restraint, which count in the group's Top Safety Pick formula.

The overhauled '16 Nissan Titan and Honda Ridgeline have yet to be tested. An IIHS spokesperson says they'll be evaluated later this year.