Tesla's Musk calculates about $7.5 billion in sales for the 'lower' priced model.

Tesla Motors has taken 180,000 orders for the Model 3 in the first 24 hours after the California-based electric-vehicle maker opened reservations for the lower-priced model, according to a tweet by Tesla chief Elon Musk on Friday morning. He added that the average price of the cars reserved, including options, was $42,000, or about $7,000 more than the Model 3's base price. "Future of electric cars looking bright!," he added after calculating that the reservation haul could mean about $7.5 billion in revenue.

Tesla started taking reservations for the model on Thursday morning. By the beginning of last night's unveiling of the vehicle at its Southern California plant, Tesla said it'd racked up 115,000 reservations, each of which requires a $1,000 refundable deposit. That number was north of 133,000 by the time Musk's presentation was done.

The company also appeared to make good on pre-unveiling details, saying officially that the five-seater would start at about $35,000 and have a single-charge range of about 215 miles. Possibly further goosing sales was Musk's claims that even a base Model 3 would be able to go from 0 to 60 miles per hour in less than six seconds, and that it could fit a seven-foot-long surfboard inside. Autoblog had the chance to get a very brief ride in the prototype, and our first impressions are here.

Last week, Teslarati estimated that Tesla would take in as many as 100,000 reservations during the first 24 hours of availability. Looks like that estimate was quite conservative. Then again, Teslarati didn't know about that surfboard thing.

UPDATE: Elon just Tweeted that the number of pre-orders is up to almost 200,000.

Thought it would slow way down today, but Model 3 order count is now at 198k. Recommend ordering soon, as the wait time is growing rapidly. 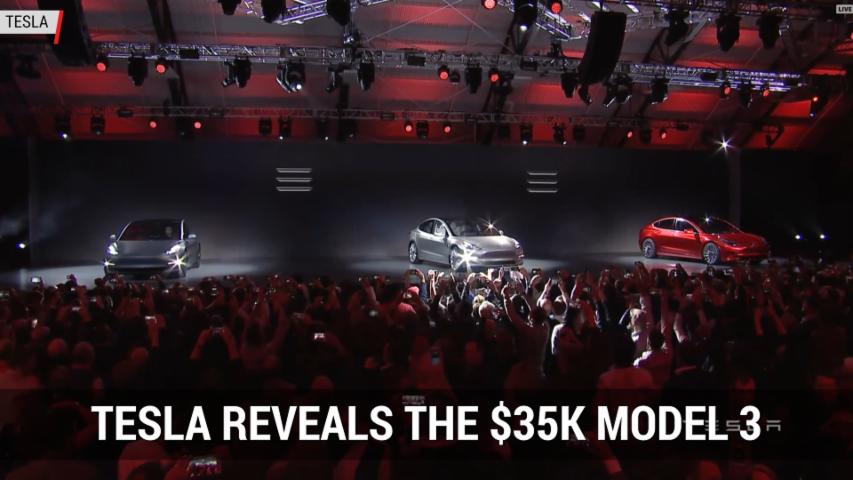