Now that we've had 7 years for tempers to settle, what do you think of the infamous IIHS crash test?

Murilee Martin
Back in 2009, the Insurance Institute For Highway Safety, to celebrate its 50th birthday and to demonstrate advances in automotive crash safety, orchestrated a frontal-offset crash test between a then-new 2009 Chevrolet Malibu and a 1959 Chevrolet Bel Air four-door hardtop sedan. According to the IIHS, the test proved that the driver of a 21st-century small car is much more likely to survive a serious crash than is the driver of a big ol' Detroit dreadnaught from the era of Elvis and the Tsar Bomba. What it actually proved, at least in online discussion venues, was " WHARRGARBL!"

Since the moment that video went online, every single human in the world with even a passing interest in cars has seen it, and a pretty high sampling of those humans immediately went to some online forum and began pounding the keyboard in an incandescent, ungovernable rage. This continues to the present day; right now, some elderly gentleman in Indiana with his very first internet connection just watched the '59 get trashed by the '09 and found some old-car-guy site upon which mash the CAPS LOCK button and bang out the comment " I NOT TRUST MY LIFE TO TAHT NEW SO CALL CHEVVY HA HA NO WAY GIVE ME REAL CAR DETRIOT STEELE THEY LIE LIKE OBAMA." 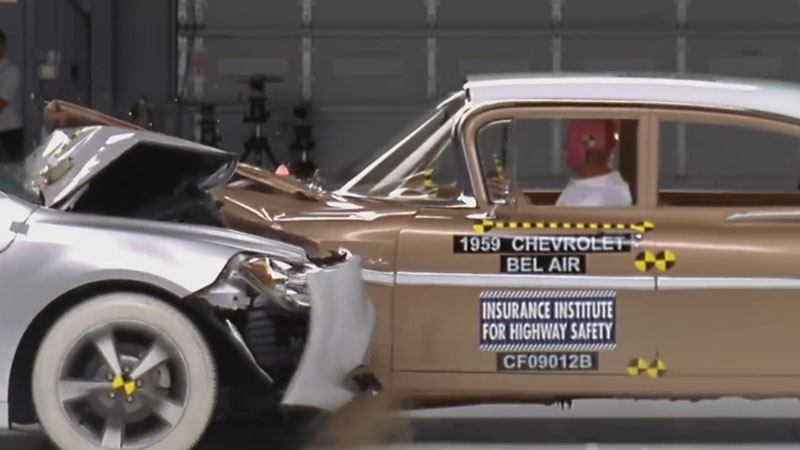 Several seconds later, some kid with a cracked-glass iPhone and a Hyundai Accent with eBay coilovers will thumb out a similarly allcaps rant about his disapproval of American cars. And so on. The point is, it was not possible to discuss this crash test. Six years later, however, everyone (except the aforementioned online newcomers) is so weary about arguing about it that perhaps we can have a reasonable discussion on the subject. Say, about the X-frame of the '59 full-sized Chevy, or the fact that the curb weights of the two vehicles were very similar, or the effectiveness of airbags/collapsible steering columns/crumple zones/whatever.

So, take a deep breath, remember how weary you became with jeremiads, screeds, tirades, and fulminations over this video back in '09, and share your most rational, non-Culture-Wars-tinged thoughts on what we really learned from this crash.
X