History was made today at the Broadmoor Pikes Peak International Hill Climb. Under perfect conditions, Rhys Millen was the first to win the race with an electric racer, and set a new record time (for battery-powered cars) of 9:07.222. Underlining the rise of electric machines, Nobuhiro "Monster" Tajima drove his Rimac-engineered e-Runner up America's Mountain in 9.32.401, to capture second place.

While the electrics were fastest today, internal combustion hasn't been vanquished completely. Sebastian Loeb's seemingly miraclulous 2013 time of 8:13.878 is still admittedly out of reach of the new technology.

Talking with Drive eO principle Khristaps Dambis, we learned this electric drivetrain has what it takes in terms of power output, and can even achieve a superior power-to-weight ratio. The problem is that the batteries make the car too heavy to match the nimbleness of Loeb's (extremely) modified Peugeot 208. Dambis is confident they will get there, but it may take a few years.

Speaking of gas power, Paul Dallenbach put on a show on his way to the summit. Not only did he demolish the open-wheel record with a 9:36.496 time, he did so using the old school approach. His battered looking, naturally aspirated, scoop-winged wonder eclipsed the fire-breathing BBI-built Porsche of Jeff Zwart in the Time Attack 1 class by over nine seconds. The fastest car in the Unlimited class, which has historically topped the time sheet, was Dominic Dobson in a Radical SR8 in 8th place with a time of 10:15.289. 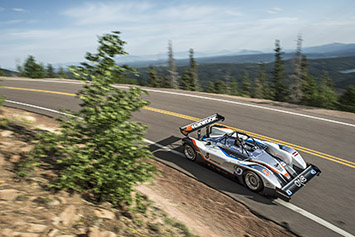 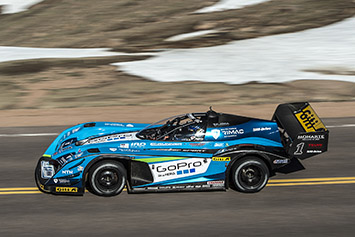 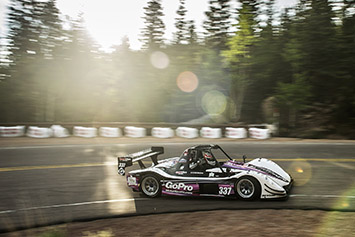 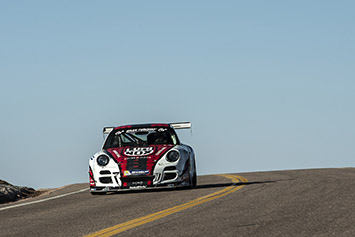 Honda has had a huge presence on the mountain all week and its efforts have paid off. Its CBR 1000 ridden by Jeffrey Tigert was the fastest bike at 10:02.735, finishing just ahead of the unorthodox Ronin team. The Denver, Colorado upstart fielded a customer's bike, and with Travis Newbold in the saddle, managed a respectable 10:18.514.

As always, Pikes Peak is a riot of cars, characters, and weather. Where else can you see a Freightliner compete against classic Mustangs, shiny Nissan GT-Rs, and custom-built racecars? People from all over the globe show up at ridiculous hours to wait to line the road and bear witness to this unique spectacle, hoping the weather will hold. This year, one of those visitors was a surprise guest who, it's rumored, is a Qatari prince whose entourage of vehicles included a Porsche 918 Spyder. Despite not being registered, he (again, this is rumor) wrangled a run up the course on Friday, with leverage from a princely sum, and a possible sponsorship deal. Scuttlebutt says he spun out twice, but happily stayed within the confines of the narrow course.

Of course, our star photographer Drew Phillips was on hand to capture all the cars of Pikes Peak. See all of the mountain's action in the galleries above and below.

The full results from the 2015 Pikes Peak Hill Climb can be seen here.