How the Autoblog staff would configure the 2017 Acura NSX

Chris Bruce
The configurator for the 2017 Acura NSX is now online, and it finally lets people spec this long-delayed supercar. Technically prices start at $157,800 (after $1,800 for destination), but you can't actually get one like that yet. The iron brake rotors aren't available until late 2016, which means the carbon-ceramic rotors with black calipers are the least expensive choice at $9,900. The cost ticks up to $10,600 if you want calipers in silver or red.

The build process inspired so much conversation among the Autoblog staff that we decided to share our choices with you and explain why we picked them. Let us know what you think in the comments. 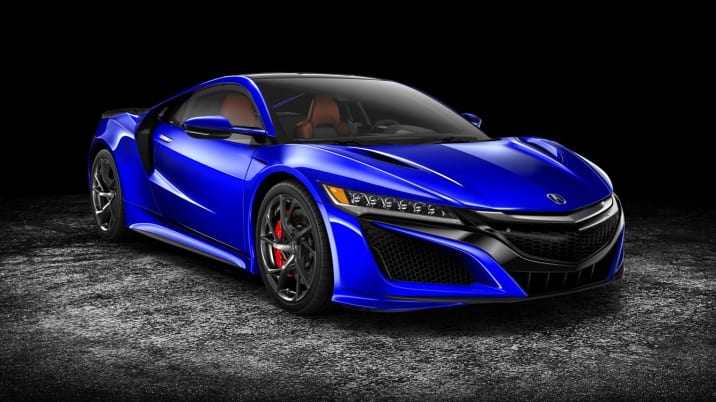 MICHAEL AUSTIN - $198,950: Mine's expensive, but I figure another 15 percent or so is irrelevant when the car already costs so much. I love the blue - it's alluring without being too flashy. Saddle leather is a must for me; it's definitely the best interior color. I skipped the carbon-fiber exterior sport package, just because I like the cleaner look of the standard body. Otherwise, carbon-fiber overkill: roof, rear spoiler, interior trim, and engine cover. If I had to cut costs I could sacrifice the $10,600 carbon ceramic brakes, which are probably unnecessary – but I'd have to wait until later this year. My only question is: where are the optional Michelin Pilot Super Sport tires I loved during our First Drive? 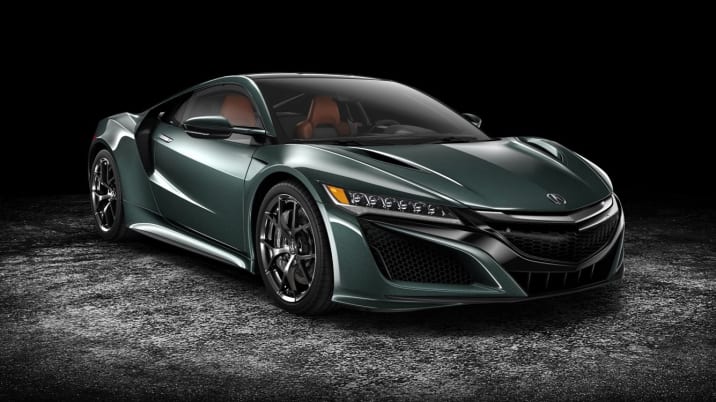 CHRIS BRUCE - $180,700: I tried not to go too wild when speccing mine, but some upgrades seemed necessary. The standard black leather was too dark, so I opted for the Saddle and Alcantara, which added $1,500 to the price. I also picked with the matching black Alcantara headliner for $1,300 and the upgraded audio system for $2,800. For the outside, I loved the Nord Gray Paint, which has a little green in it, and I splurged for the $6,000 carbon fiber roof. To finish things off, I went with the silver calipers on the carbon-ceramic brakes for $10,600. 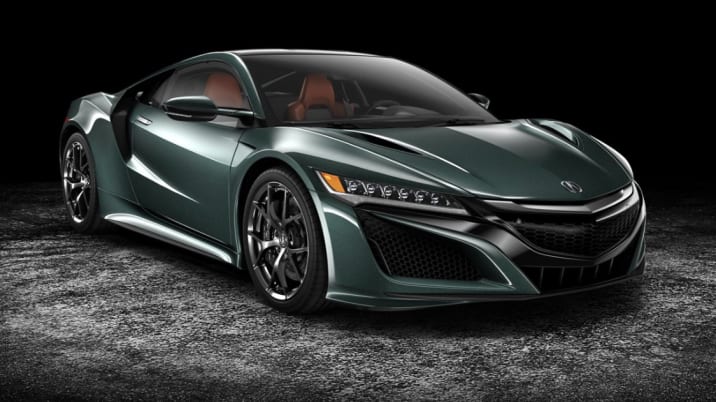 STEVEN EWING - $172,700: I'm not the extravagant type. I don't want flashy colors, red calipers, or unnecessary carbon fiber crap on the outside. Give me something that flies under the radar, with the only the options I need. Plus, the NSX hardly feels like a $200,000 supercar to me. 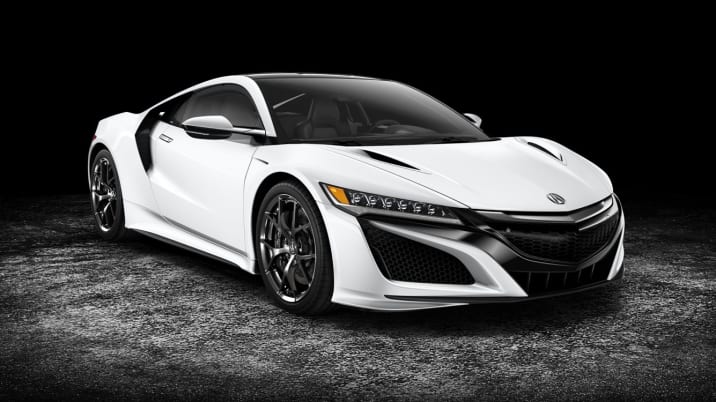 ALEX KIERSTEIN - $176,500: Japanese cars tend to look best in classic white, so I went with that for the exterior. I like a dark interior, but I also love Alcantara – so that goes on the headliner. The carbon-fiber roof is a bit of an extravagance, but this is all fantasy, right? Put it where it might do some good on this hefty thing. It's disappointing that iron brake rotors aren't available yet. I found most of the carbon-fiber dress-up bits garish and avoided them. I love the base wheels, so they stay. And somehow, we're at $176k. That ain't cheap. 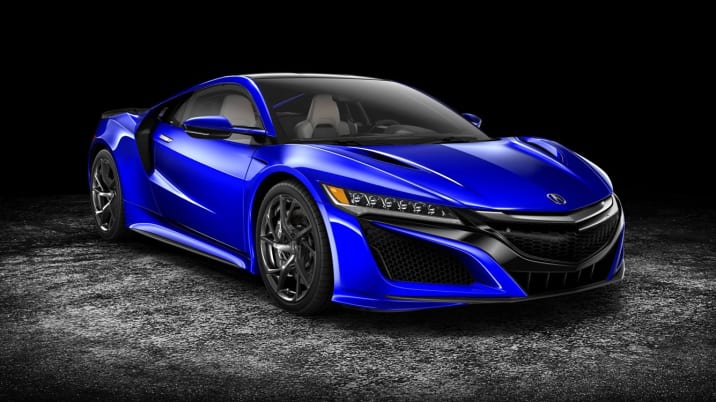 JEREMY KORZENIEWSKI - $206,500: I love simple sportscars, but the reborn Acura NSX is not one of those. In fact, it's extremely complicated. So, I took Acura's lead on my NSX build and didn't hold back on the high-tech options. If something is offered in carbon fiber, I checked the box. That includes the ludicrously expensive Exterior Package and $3,600 engine cover. Who would buy an NSX without the Audio and Technology Package? Not me, so on it went. I picked the Nouvelle Blue Pearl paint before I realized it was a $6,000 option, but chose to leave it because it's pretty. And since the price had already crept up near $200,000. Final tally: $206,500 after the $1,800 destination charge. 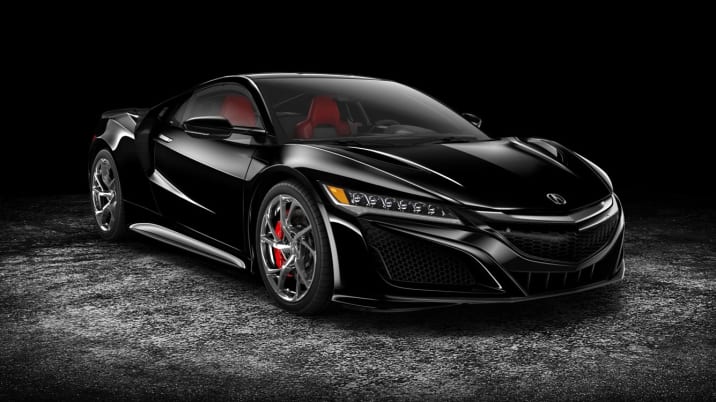 GREG MIGLIORE - $201,500: Mine came in at a cool $201,500. I went with black paint because I wanted a sinister appearance. Then I loaded up on the carbon-fiber options, added blingy wheels, and choose a flashy red interior. I wish this was waiting for me at the curb right now. 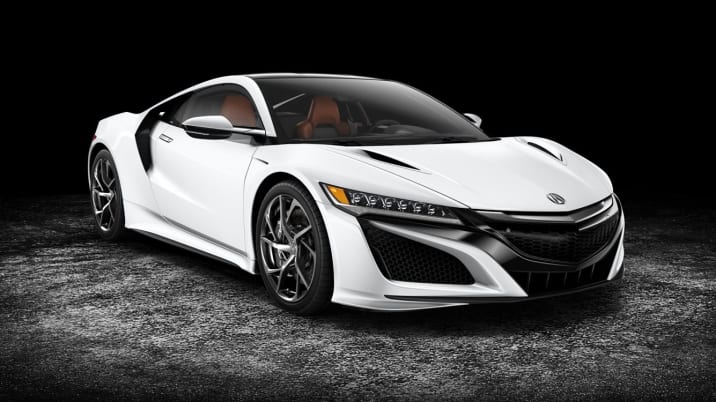 DAN ROTH - $174,200: It's easy to be modest with your NSX and stay near its base price. Why? Because the car itself is so immodest to begin with. None of the options are necessary if you intend to street-drive this car. You can carbon-fiber this thing up - the roof, the rear spoiler, the interior trim. How gauche.

More expensive carbon can be ordered, too. There's a couple carbon ceramic brake upgrades, all of which cost as much as a 5 year old Civic. You really think you're gonna need this stuff on the street? Nope. Iron brakes will work just fine. You're a sociopath if you need more anywhere outside a track. Unfortunately, though, if you want your NSX now, you're going to be stuck with the carbon ceramic brakes, because the iron brakes won't be available until later in 2016. I went for the cheapest carbon-ceramic setup with black calipers, wasting $9,900 imaginary bucks in the process. Lame. Stupid.
Expensive paint colors? Nah. White's fine. The standard black wheels looked dumb, though, so the Interwoven wheels with machined finish added a pretty reasonable $1,500 to the tally.

I did spring for the ELS audio system, because it sounds good in other Honda/Acura vehicles, and because black interiors are for chromaphobes, I selected Saddle. Turns out you have to get semi-aniline leather/Alcantara power seats for that interior color. Fine. Semi-aniline leather should be more durable, because it's dyed more thoroughly, so whatever.

Really, the options for this car don't do anything to improve performance in an appreciable way. They all seem to be appearance options masquerading as the trappings of motorsports upgrades. Maybe that stuff will help you find glory on the track if you're a talented enough driver. If you're just going to use the NSX to blast conspicuously around town, you don't need all that junk. It's expensive, and wasteful, two traits which should never taint the NSX legacy. 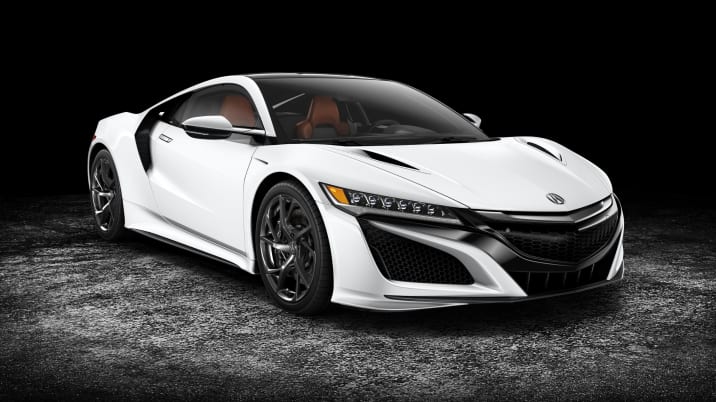 BRANDON TURKUS - $196,800: I'm a big fan of international racing colors. German cars should be silver, Italians red, and the French should be blue (ignore the fact that my British-made Mini is red and not Racing Green...). That's why I picked this lovely, non-metallic white for my NSX. I also like the fact that it's called 130R, because Suzuka is awesome. I finished the roof, interior, and engine cover in carbon fiber, but not the spoiler – it gives the rear a fussy look. That's also why the carbon-ceramic brakes get black calipers and the awesome, interwoven black alloy wheels. I broke up the monochrome color scheme in the cabin, opting for Saddle Brown leather with black Alcantara accents. Total price? A tidy $196,800.