Lexus is sharing some powertrain details on the LC 500h ahead of the big hybrid coupe's debut in Geneva. Its new gas-electric setup strays from Toyota's tried-and-true system found in everything from the Prius to the Lexus GS. It's called the Multi Stage Hybrid System that's designed for performance vehicles, and it has an antiquated-sounding piece of equipment buried deep inside that's supposed to make it more enjoyable to drive.

The basics: In the LC 500h, its first application, the Multi Stage Hybrid System will consist of a 3.5-liter V6, a hybrid transmission, and a lithium-ion battery pack. The hybrid transmission has an electric motor for motivation (and we're guessing a second for charging) and a four-speed automatic mounted to its rear, which either means inside or aft and in series. Why add ancient tech to a new hybrid system? Lexus says it preserves the connection between throttle input and engine speed that gets lost in a CVT. And while four seems like an insignificant sum in the face of nine- and 10-speed autos, remember that it is an infinite increase in gear count compared to CVT-packing hybrids.

Toyota has been using versions of the Hybrid Synergy Drive system since the first Prius debuted in 1997, and the same system is sold under the Lexus Hybrid Drive banner in most of the luxury brand's offerings. These systems use what Toyota calls an e-CVT – two electric motors paired with a planetary gearset. This lets the engine and electric motors share the job of propelling the car – one motor handles charging of the battery and the other is primarily used to drive the wheels but can also recoup energy through regen. Like a conventional CVT, the planetary gearset arrangement allows the gas engine to run at its optimal engine speed when called upon for motivation and/or charging. 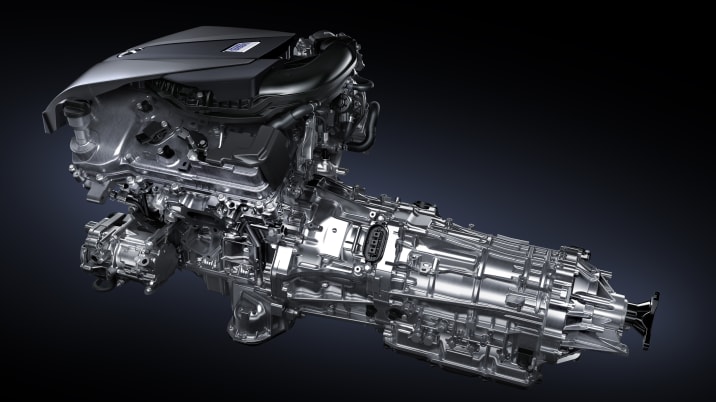 But that doesn't make for the most exciting or familiar driving experience, as it affects both power delivery and the sound of the power being delivered. This is where the four-speed auto comes in. Based on the limited details Lexus has shared, our hunch is that the hybrid transmission will meld some form of the existing Lexus Hybrid Drive system with two more planetary gearsets, or the basic guts of a four-speed auto. This will provide the four fixed ratios and the feeling of actual shifting gears – because there will be actual gears shifting. (Students of history will recall that a GM/Daimler/BMW hybrid transmission joint venture produced a two-mode system that used two electric motors and a series of planetary gearsets providing four distinct gear ratios. Knowing Toyota, we're guessing this new hybrid system is simpler, more efficient, and in some way ingenious.)

That gear shiftiness means the engineers were able to add the first manual mode for a Lexus hybrid. It is imaginatively called M mode and should not be confused with the M button from a certain manufacturer with an M in the middle of its name that makes cars plastered with the letter everywhere possible.

The LC 500h's V6 makes 295 horsepower and 257 pound-feet of torque; with the electric motor added, in the system is rated at 354 hp. Lexus is forecasting a sub-5.0-second 0–60 time for the big hybrid coupe. The V8-powered LC 500 is said to hit the same speed in under 4.5 seconds. As in the V8 car, the LC 500h also gets several weight-saving touches, like aluminum for the hood and fenders, carbon-fiber door structures with aluminum skins, aluminum front suspension towers, and an available carbon-fiber roof.

We will be learning more about the LC 500h's novel hybrid system shortly, so check back later today for an in-depth take with some of the technical blanks filled in.