Chief executives aren't normally as candid as Akio Toyoda was last week. At the launch of hot new Lexus LC 500 coupe at the Detroit Auto Show, the chief executive of Lexus and Toyota and grandson of the company's founder, said that he'd received letters telling him that his Lexus luxury brand cars were dull and boring and that he agreed.

"I took them to heart," said this tiny and forceful boss, "and I'm ensuring that the word 'boring' and 'Lexus' will never occupy the same sentence ever again."

But boring has been an ongoing problem for Lexus. And for the last year I've been involved in trying to help solve it. Let me explain.

Akio has made his extraordinary "Lexus is Boring" speech before. That was five years ago on the windswept golf courses at the Pebble-Beach Concourse d'Elegance at the launch of the fourth-generation GS sedan. With its new-look spindle grille, basking-shark air intakes, and razor-edged curves, GS was the first of the new-look Lexus models, but Akio still wasn't happy. In 2011, after 11 consecutive years of premium market leadership in America, Lexus had lost it to the Germans. Mercedes-Benz, BMW, and Audi didn't just build better looking cars, but more interesting and more fun-to-drive cars. 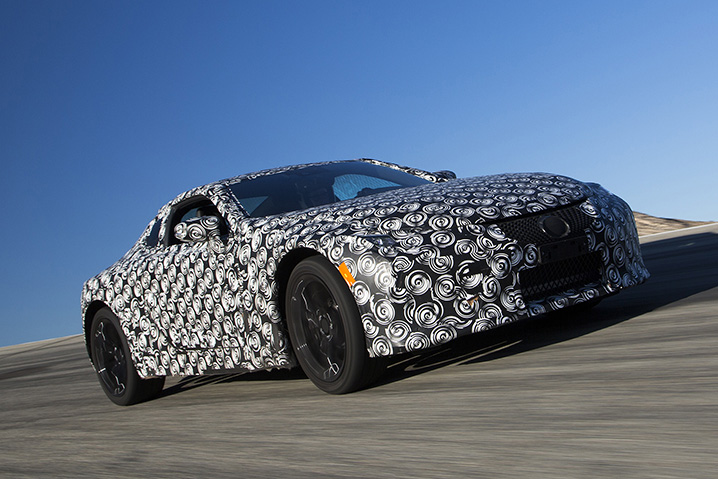 "We're not just making a coupe, we're creating a new generation of Lexus."

Lexus' shtick of reliability, immaculate-quality, hybrid gas-efficiency, golf-bag trunk optimization, and specification-adjusted value didn't cut it anymore. Akio, a keen race driver and petrolhead enthusiast, knew his cars needed a dynamic shot in the arm and a smoldering love affair with right-brain desirability. In short, he wanted Lexus engineers to build a car to bring a smile to drivers' faces.

A tall order, then. And one which Koji Sato, deputy chief engineer on the LC had to consider carefully. As he says: "Akio's Pebble Beach speech was the starting point; we're not just making a coupe, we're creating a new generation of Lexus."

With such a brief, and Akio's legendary peppery opinions in mind, Sato came up with a radical idea. Reckoning that sometime in-house teams can look so much in-house that they become blinkered, he decided he needed to open things up and recruit a team of outsiders. So, for the last year I, along with a small team of hand-picked journalists, race drivers, and keen-driving dealers, have been part of Sato-san's 'irregular army'.

Why me? It's a good question. As Robert Tickner, general manager of product and marketing for Lexus in Europe teasingly put it, "We tried all the good people and they were all busy, so we ended up with you." 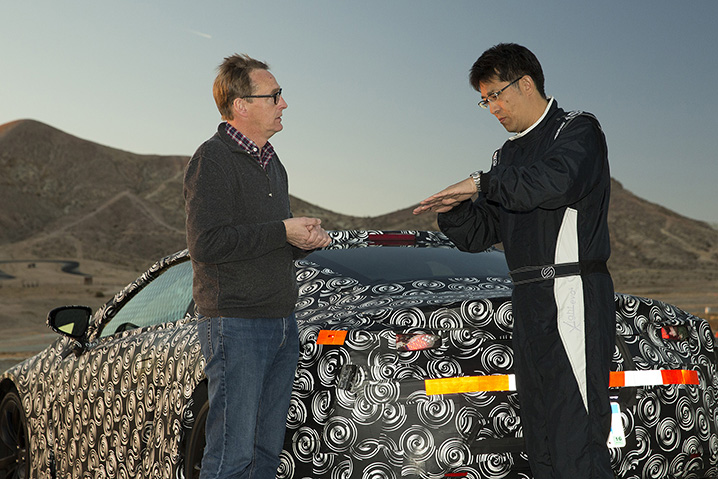 The LC 500 goes on sale in America and Japan at the beginning of 2017 and in Europe later the same year.

This was an incredibly risky strategy and not just because Sato was in jeopardy of exposing the whole project through leaks (we all signed strict non-disclosure agreements), but it was also an arduous logistical exercise to coordinate individual plans to get the test team together at three special US driving events. There was also the risk that one of us would run out of talent and bin one of these extraordinarily valuable prototypes. Which is exactly what happened to one over-enthusiastic insider from Lexus, so my first drive took place in a hastily coned-off part of the car park of the Rose Bowl Stadium in Pasadena, CA, where the most likely consequences of getting it wrong would be piling into the hot-dog concession.

Covered in disguise tape, with its interior panels covered in photographer-foiling drapes and packed with monitoring equipment, this prototype for Lexus' new flagship front-engine, rear-drive coupe has its looks based on the handsome 2012 LF-LC concept designed by Toyota's Calty Design Research Incorporated group here in the United States. That car was described by Mark Templin, now executive vice president of Lexus, as "a sneak peak of what we're up to in the future."


The hardware and dynamics of this big coupe are also expected to form the backbone of the replacement LS sedan models.

But the LC is more than just a snazzy new V8 coupe (another drivetrain option is widely expected to be announced soon). Its significance goes well beyond its specification, since the hardware and dynamics of this big coupe are also expected to form the backbone of the replacement LS sedan models. So this is a new beginning.

I drove a few laps in the Lexus and then followed those up with the benchmarked cars: BMW 650i, Lexus GS F, and Maserati GranTurismo. Dynamically, the Lexus didn't seem too bad. It was a bit soft, with over-assisted steering, but the chassis gave good feedback and it seemed to handle the parking lot bumps well. The V8 sounded gorgeous, but that 10-speed auto was very new and quite rough, with harsh changes and oddly spaced ratios. At the debrief, we all agreed that Sato wanted the new LC to follow in the steps of the LFA sports coupe, not its less well-received RC F.

The next test took place on Mount Wilson in the Saint Gabriel Mountains behind Los Angeles. I was joined by a man with a hugely desirable business card, Yoshiaki Ito, whose job title is "Chief Expert – Advanced Technical Skills." He also packs a mean pair of shades, perhaps hiding his reactions to my lack of said advanced technical skills

We tore up and down the mountain in the prototype Lexus and its benchmarks, and in the early evening I had a grueling 45-minute debrief with the entire team on the minutiae of the car's behavior. This test regime was becoming known in my family as "all the meals I've never had," since I invariably had to go to the airport at the end of the day rather than have supper with the team. 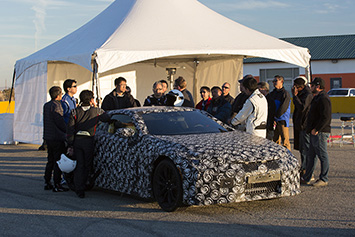 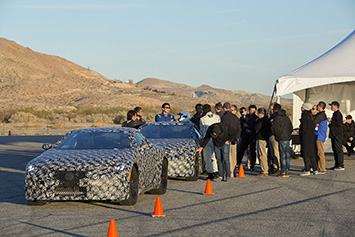 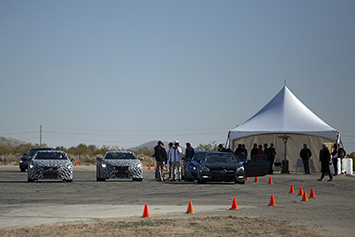 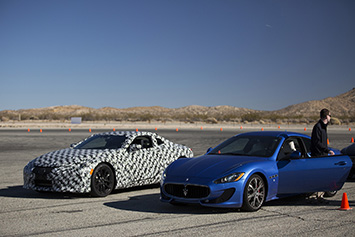 The LC 500 wasn't horribly outclassed and it compared really well with BMW's 6 Series.

The last event was at Willow Springs International Raceway, where the much modified Lexus prototype was now packing the latest changes to the suspension including new geometry and ball joints for the front wishbones, longer uprights, and revised air suspension settings – plus a rear steering system, which I understand will be optional for production.

It all felt much improved. I thought the rear steering required more programming work at high side forces where it seemed to fight against the car's natural balance, and that the front felt too soft. Dynamically, the competitive Porsche 911 Lexus brought along felt more at home on the track, its rear engine helping turn-in, but the LC 500 wasn't horribly outclassed and it compared really well with BMW's 6 Series.

The Lexus was also running on the latest specification run-flat tires from Bridgestone, which will be fitted to the production vehicle. With a brand-new tread pattern and rubber construction, with 16 percent less rubber in the sidewalls and a single-ply construction instead of two-ply, the aim is to reduce the weight and the notorious ride quality drawback of the traditional run-flat tire, while still maintaining the obvious advantages of not having to carry a spare.

That 10-speed auto had improved hugely and felt positive and fast, but why hadn't Lexus produced a dual-clutch transmission like most of its rivals? I put the question to Hideo Tomomatsu, transmission project manager. 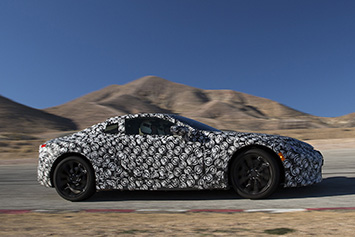 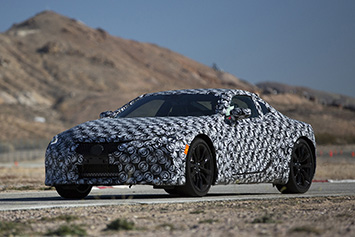 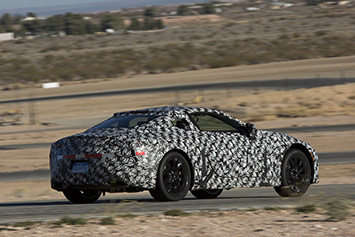 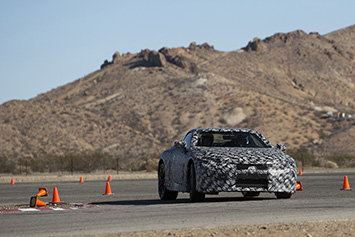 "American and Japanese customers expect a degree of low-speed refinement that a DCT simply can't deliver."

"I don't understand why a DCT gearbox is necessary," he said. "They say it is for a sporty feel, but we can achieve that with our 10-speed and while dry twin-clutch transmissions can be quite efficient, the wet clutch systems for high power [applications] introduce a lot of drag and can overheat. More to the point, American and Japanese customers expect a degree of low-speed refinement that a DCT simply can't deliver."

Afterward, Sato-san and I discussed the car's dynamics and he agreed with me on the rear steering system, but not with my thoughts on the steering being still marginally over-assisted. I told him I thought the LC was starting to have a clear dynamic fingerprint, with a soft but responsive turn-in and faithful tracking through a bend, but the ability to powerslide wide if the driver so wished. Sato-san looked delighted.

"What I am most happy with," he said, "is the precision of the steering and the way the yaw builds up. There's still a gap between where we are and where we want to be, and the rear steering requires work, but we are getting our own 'taste' into the car. It's not a BMW and not Jaguar, but ours." 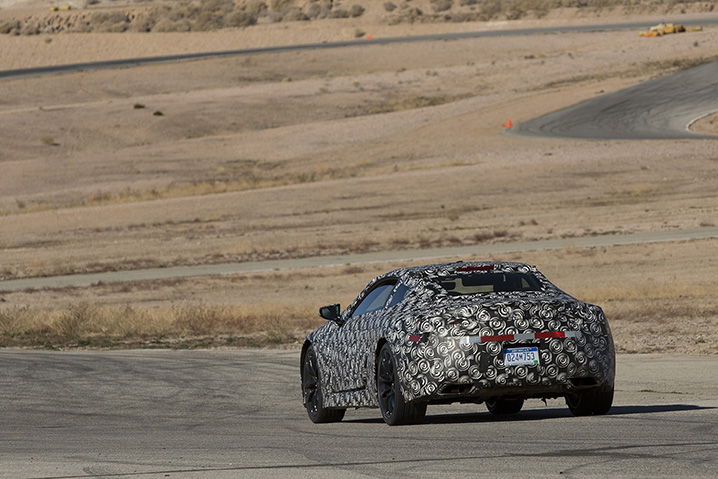 "We have got the basics right ... but it's that last 10 percent that is so difficult."

In the next few months as the LC 500 gets near its late-spring engineering sign off, Sato's prototypes will become more like the production cars, with carbon-fiber body parts including the roof, which will reduce the prototype's weight by 330 pounds to give a curb weight of 3,968 pounds and alter the center of gravity and the handling.

"We have got the basics right," says Sato, "but it's that last 10 percent that is so difficult."

Sato's 'irregulars' are now disbanded as the car approaches its engineering sign off. I have only the vaguest notions of how the LC 500 will drive when I get my hands on it next year, but have grown to like and respect the engineering team which created it and have the most amazing memories. I even managed to eat a couple of suppers with the team, eventually.

But the team faces an awesome challenge before the engineering work is done: Akio is booked to drive the LC 500 in late February. His irascible dressing-downs of his engineering staff are renowned. For the sake of Sato-san and the rest of his team, I do hope he likes it.