It's the M we want at a size we can live with.

Don't skip down to the conclusions, because I'll save you the trouble and spell it out for you right here. The 2016 BMW M2 is superb. Lay out your criteria for a contemporary sport coupe. Then check all the boxes.

There are gripes. We've gotten good at uncovering the little issues in an age where the difference between the best and worst car in a class is smaller than ever. But they're that: little. It's a small price to pay for a vehicle that delivers so much more to the driver than the M235i – engagement, performance, pleasure – that it seems a bargain at $52,695 to start. Moreover, it's the right-sized M car we've wanted since the M4 burst its chrysalis and turned into an extra-large, if not overweight, butterfly.

BMW had us out to Monterey to sample two M2s: a 7-speed DCT on Mazda Raceway Laguna Seca, and a six-speed manual on the fog-kissed Pacific Coast Highway. 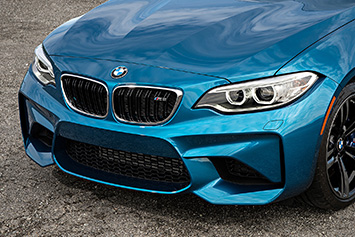 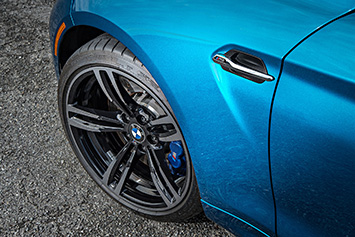 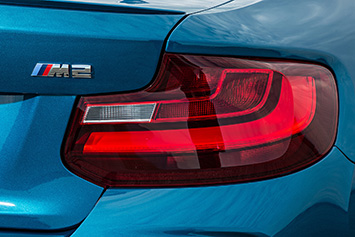 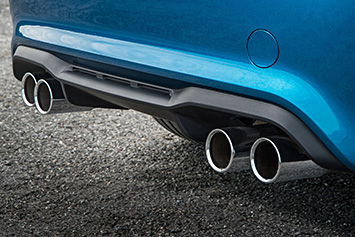 The formula here is old-school – thank heavens. It's a compact sport coupe with swollen wheel arches and a hot-rodded inline-six. The proportions are classic: longish hood, short rear deck, reasonably airy greenhouse in the tradition of sporting BMWs, and plenty of meat on the sticky tires. Long Beach Blue paint provides depth to the sheetmetal scalloping and contrast to the fender flares – and the M2 looked great in this bold color. I can't say the same for the less-exciting grey example parked in the hospitality tent.


Like most modern turbocharged BMWs, the torque curve is fatter than an In-N-Out Double Double, Animal Style.

The overall rightness of the proportions compensates for the more polarizing details. The dimples in the rear bumper, the "scoops" in the lower secondary air inlets, the obligatory fender vent (which is at least small). They're all intended to communicate aggressive sportiness, and succeed to varying degrees, but it's just jewelry.

Inside, BMW's excised some of the cheapness that plagued the 2 Series' predecessors. The blue contrasting stitching looks great, the sport steering wheel is perfectly sized, and the carbon-fiber patterned accents at least provide a little texture to break up an unapologetically black interior. On the other hand, the door pulls are not only cheap-looking, but also so large they're impossible to ignore. It's a baffling misstep in an otherwise simple and classy interior. As a quick aside, the HUD is clear and functional – not a new feature for BMWs, but worth noting. 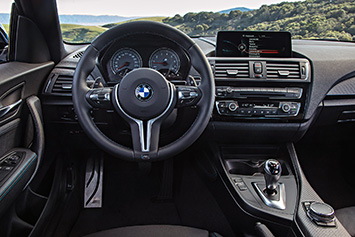 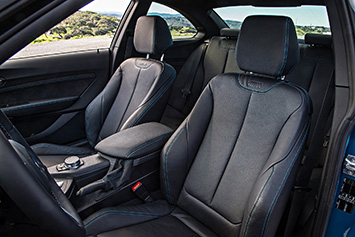 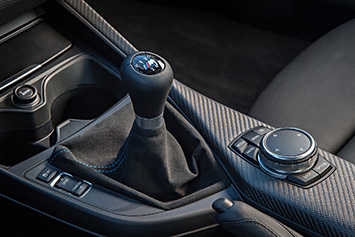 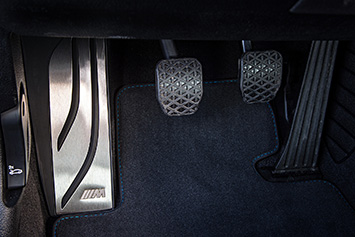 About the sport buckets: they're wonderful, providing multiple-hour comfort paired with track-day support, without any interior-organ-rearranging, intrusive bolstering. Incidentally, I happen to hate the design of the upholstery paneling, mainly how it's divided longitudinally, which looks flat and cheap. You can't see them when you're ripping down the Corkscrew, so it's a wash in the end.

Let's talk about what BMW put under the hood. Despite the overt attempts to link it to the 2002 Turbo of the 1970s, the M2 utilizes a single-turbocharged inline-six displacing 3.0 liters instead of its distant ancestor's turbo inline-four. For the diehard BMW fans, the designation of said inline-six is N55B30T0, and it features the whole suite of advanced engine systems the company can throw at the thing. The turbocharger is a twin-scroll unit, and the engine features direct injection, Double-VANOS variable cam timing, and Valvetronic fully variable valve lift. Like all Valvetronic-equipped engines, it doesn't use a throttle plate in normal operation and relies on fully variable lift to control the air supply. Compression is 10.2:1, and peak power (365 hp) is achieved at 6,500 rpm. Like most modern turbocharged BMWs, the torque curve is fatter than an In-N-Out Double Double, Animal Style. 343 lb-ft is available from 1,400 rpm to within a grand of the horsepower peak (5,560 rpm), and it feels like that. The torque curve looks like a classic Southwestern mesa: steep on the sides, flat as a table on top. 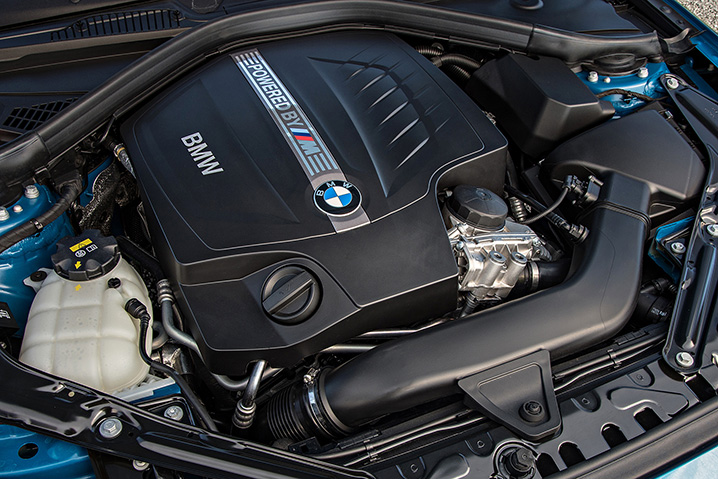 For non-BMW nuts, here's the bottom line: this engine is a torque monster. Bog it in fourth gear, whomp on the accelerator, and it just pulls. This is not a vehicle that requires work to keep it on boil; shifting, while enjoyable, is to some degree optional in most twisty road situations. What this means, in practical terms, is that the M2 has enough grunt to pull itself out of an unexpected, dramatically decreasing-radius turn without a downshift – not an unusual situation in the tight, winding canyon roads between the Carmel Valley and Laguna Seca. It also allows for fierce acceleration in a passing situation, an experience nearly as satisfying as its more explosive M3 and M4 stablemates. BMW says the M2 reaches 0-60 in 4.2 seconds for the DCT and 4.4 for the manual; we didn't time the car, but based on our butt dyno that might even be conservative.


Gripes? Not many, but they might drive the diehard enthusiasts nuts.

The M2's suspension bits are primarily aluminum, fitted with M-specific stiff bushings. It's worth noting that BMW told us that the M Adaptive suspension is not available, even as an option, on the 2016 M2, although you can fit them to the M235i and the M3/M4. Judging by the calibration and capabilities of the traditional dampers on the M2s we tested, that shouldn't be an issue. By the way, weight balance is very near 50-50 with either transmission, and the manual-equipped car weighs in at 3,450 lbs. The DCT option is a 55 lbs weight penalty.

The steering is electrically-assisted, and that means there are good aspects and less good ones. When we first drove the M3 sedan, for example, we were frustrated by the artificial weighting and lack of feedback from the steering wheel. Without an M3 or M4 on hand to directly compare, and having last driven one several months before, it seemed to this reviewer that the M2 has partially transcended the steering issue. You can't describe the steering as alive in your hands with a straight face, but the accuracy is prescient and the weight perfect throughout the lock-to-lock range. There's also enough communication coming through the seat bottom about what the chassis is doing to pick up the slack for the EPS in most situations we encountered. This is a good sign that engineers are finally overcoming EPS's major drawbacks (the assist in the C7 Corvette is another). Hopefully the next-generation racks will address the feedback issue, too. 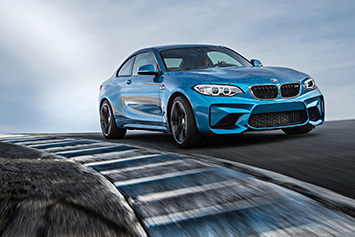 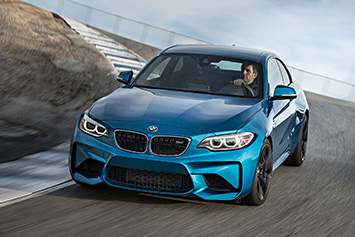 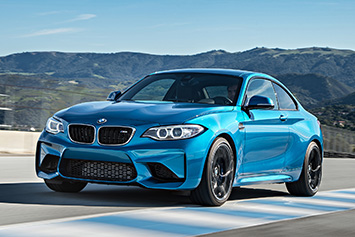 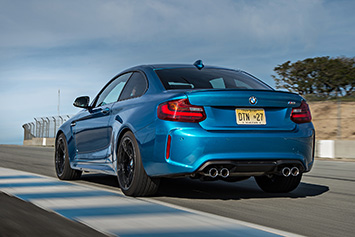 In every situation we put it in, the M2 nailed the killer balance between body control and communicative roll. There's just enough body motion to signal to the driver what's going on. Load up the suspension and crank it over, and the weight transfer is smooth. The ride is firm, but not crashy. This could be a daily driver nearly anywhere. With forgiving handling characteristics and tons of torque, it suffers fools gladly and also rewards those who want to probe its limits.

Gripes? Not many, but they might drive the diehard enthusiasts nuts. You can't disable the rev-matching feature on the manual-equipped M2 without shutting off all the safety nannies. That's a shame; The pedal box is perfectly sized and positioned for the driver to do it themselves. And while it sounds great, a throaty belt with a staccato drum-roll of crackly pops on overrun in Sport and Sport+, it's both artificially-enhanced and a bit too theatrical. Maybe the backfiring thing is reaching its illogical conclusion, judging by how the M2 shouts "look at me!" with every throttle lift, no matter the speed or situation. It sounds cool in small doses, so BMW should cool it a bit and make that crackle more special to the driver. 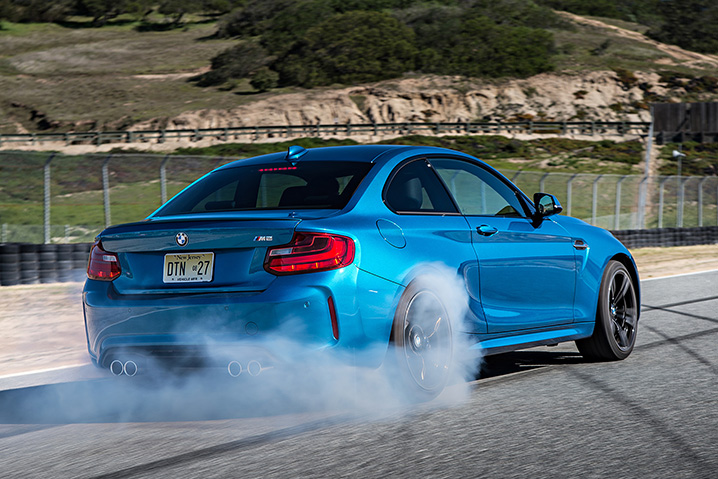 A quick caveat: that Drift Mode? We didn't get to sample it on this drive. One more caveat: we were only allowed to drive the manual on the street, and only the DCT on the track – this plays to their natural strengths, but made it harder to evaluate how either version fully performs in all situations. I have no doubt the manual version would be rewarding on track, rev-matching or no, but for those eyeballing the DCT I wish I could tell you if it's a hassle in normal street use. Judging by how much more well-behaved these transmissions are in general (and in BMWs) in recent years, and how well it worked in the M3, there's no reason to assume it'd be much different.

If you feel that the M3 and M4 have outgrown their place in the lineup as lithe, compact sport sedans and coupes – becoming instead brutally quick, heavy, comfortable bruisers – the M2 might be your jam. It feels right-sized, it has the moves, it makes glorious noises from a proper inline-six (albeit turbocharged), and it looks every bit the part. Its wheelbase is only five inches longer than an E30, by the way – were you wondering if this review would wrap up without mentioning that storied chassis code? – and a tenth longer than the E36. Have you been following along with your checklist? Are all the boxes ticked? We thought so.