View All Specs
Remember when turbos were a big fat middle finger to the naturally aspirated status quo? The horsepower renaissance has seen the forced induction phenomenon go from badass add-on (Turbo 'Vette!) to battle cry for efficiency ( Kia Optima Turbo). From econoboxes to high-end holdovers like Ferrari and Aston Martin, everybody's doing the turbo shuffle. But what does that mean for the gang from Stuttgart – and more importantly, the top-of-the-line 911 that has called itself Turbo since the mid-1970s? I spent a day in the 2017 Porsche 911 Turbo and Turbo S to find out.

Now is a particularly fitting time to evaluate the latest iteration of the venerable Porsche 911 Turbo. Our scrutiny comes at a moment when standard-issue Boxsters, Caymans, and Carreras have finally adopted turbocharged platforms. 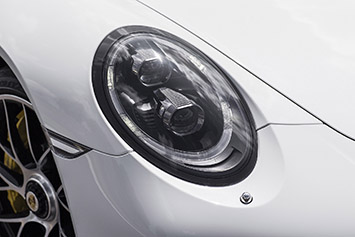 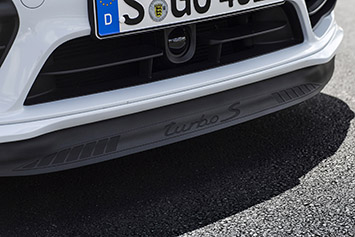 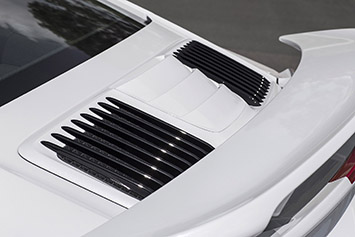 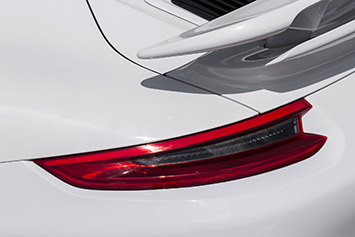 The Turbo S has a top speed of 205 mph, marking the first time the model has crested the 200-mph barrier.

Spoiler alert: Rather than radically transforming its long-evolved essence, the 2017 Porsche 911 Turbo has made incremental changes that makes it, well, more Turbo than ever. Horsepower for the Turbo and Turbo S climbs 20 each, to 540 and 580, respectively; 0-60 times drop to a scant 2.9 and 2.8 seconds, and these top dogs now have terminal velocities of 198 and 205 miles per hour, marking the first time the model has crested the 200-mph barrier.

The forced-induction flagships have different engine hardware, another first for the lineup, with the S gaining larger turbo impellers and housings. A revised differential enhances the precision of power transfer, while the PDK dual-clutch transmission (the only gearbox available) gains a centrifugal pendulum for smoothness. The dynamic engine mounts now work harder for crisper response, and the variable damping rates have been extended at both ends for a wider range of settings. If you're a fan of hanging the tail out, you'll be pleased to know that a new Sport mode enables greater yaw angles. And if you dig indiscreet bursts of acceleration, there's now a Dynamic Boost function that preps the drivetrain for a little extra oomph by dropping down a gear and holding the throttle open to maintain turbo pressure, increasing torque from 487 to 523 pound-feet, and from 516 to 553 lb-ft in the S. Standard equipment now includes a Sport Chrono Package, camera-equipped parking sensor, and the Porsche Dynamic Light System. 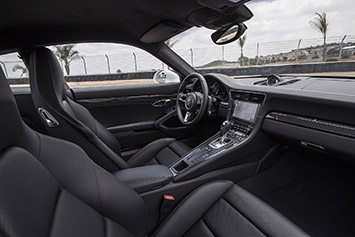 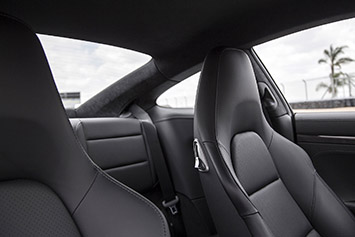 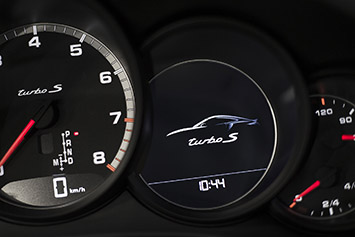 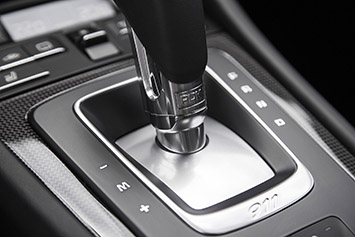 Engine flexibility is outstanding, allowing peak torque to start at only 2,250 rpm.

A (Brief) Date With Kyalami

I flew 22 hours to South Africa to drive the new Turbo models, and my day started with a surprisingly brief stint at the new Kyalami Circuit in the Midrand region of the Gauteng Province. The track, whose history goes back to the glory days of Jackie Stewart, Nigel Mansell, and Michael Schumacher, is fresh from a restoration that made it faster – music to our ears, given the 911 Turbo's long legs.

Chasing a 911 GT3 RS driven by Porsche works driver Joerg Bergmeister, the Turbo S has a slingshot-like way of accelerating out of pit lane. Thanks to the flat-six's variable turbine geometry (which Porsche says is the only usage of the technology in a twin-turbo gas-powered car), engine flexibility is outstanding, allowing peak torque to start at only 2,250 rpm. Once you reach around 3,500 rpm or so, the tach spins even faster towards the 7,200 rpm redline. Net sum? The aforementioned, startlingly quick 2.8-second sprint to 60 mph, and a quarter mile time of 10.8 seconds. 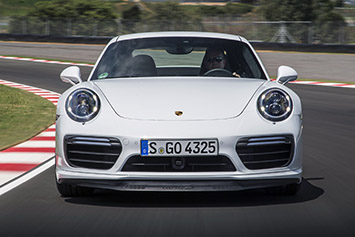 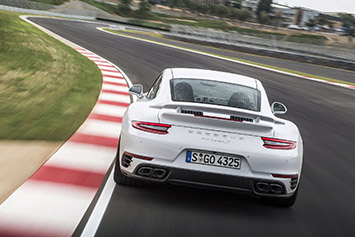 This is a car whose performance capabilities challenge your mind and body to work faster in order to rise to the occasion and match its speed and strength.

You'll learn a lot about the turbocharged 911's character when you hit high-speed corners where dialed-in track animals like the GT3 and GT3 RS thrive. Though the Turbo doesn't offer as much sharpness and hunkered-down grip as its naturally aspirated, rear-drive counterparts, there's an astounding amount of cornering capability once the tail settles in. Throttle only seems to help the car's arc through the corner, perhaps evidence of Porsche's torque vectoring technology. Rolling onto the gas through the apex offers a uniquely exhilarating experience of thrust as the car lurches forward on its trajectory.

This is a car whose performance capabilities challenge your mind and body to work faster in order to rise to the occasion and match its speed and strength, something I had another taste of during an afternoon drive through South Africa's rural highways. By pressing the Dynamic Boost button on the steering wheel-mounted control (inspired by the same setup on the 918 Spyder), the 20-second window displays a graphic countdown on the instrument panel that inspires all manner of landscape-blurring hoonery. The acceleration in this mode is noticeably sharper, and the results are stunning.

On one particularly vacant stretch of highway, I wound the engine up until I saw an indicated 150 mph before summoning the massive six-piston ceramic brakes, which undid the ridiculous speed with alacrity. Stability at 73 percent of V-max was reassuring, thanks in part to an expanded active aerodynamic profile that manipulates two front spoilers and the tail for varying high-speed conditions. Speed mode creates low drag for top speed runs, while Performance mode channels more air around the car through the front spoilers and tilts the tail up, creating 291 pounds of downforce at 186 mph. According to Porsche, this mode enables a two-second quicker Nürburgring lap time.


If effortless, all-day velocity is your prime requirement, the 911 Turbo is a relentlessly effective tool for the job.

Unlike cars whose engine flexibility and acceleration are modestly enhanced through forced induction (read: 911 Carrera), the 2017 Porsche 911 Turbo exemplifies the use of turbocharging for total and absolutely lunatic performance. While players like the Nissan GT-R use horsepower and technology for boisterous dramatic effect, the latest 911 Turbo is an exercise in silky smooth modulation, balancing incredible athleticism with linear power delivery, ride refinement, and long-range comfort.

If you crave a razor sharp track toy or a glued-down canyon slicer, you may want to hunt elsewhere. It's been years since Porsche's top Turbo model was the right tool for that job, and each iteration has only become more of a bullet train-style grand tourer. But if effortless, all-day velocity is your prime requirement, the 911 Turbo is a relentlessly effective tool for the job, one that will press you deep into your seat with eerie tranquility as it hurtles you across Earth at obscene speeds. 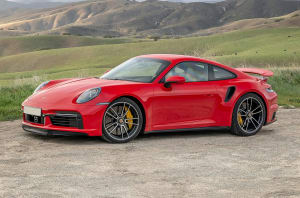 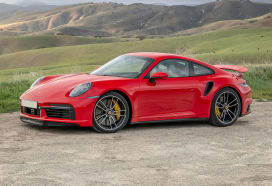