UPDATE: Volkswagen clarified a few things about Budd-e's modular platform and other technologies at a CES roundtable talk. We initially reported that the EV architecture underneath the concept was a derivation of the MQB platform. VW is now characterizing it as a scalable "all-new" architecture. Budd-e represents the A/B segment crossover version of the platform. Interestingly, the flat battery module can be scaled to the size of the vehicle as well. VW tells us the platform won't support internal-combustion range extender engines. The plan right now is to keep it purely electric. Furthermore, the EV tech is being developed in-house, not through outside suppliers as we initially thought.

As for the quick-charge capability, VW revealed that if Porsche's proposed 800V charging system goes into production and is adopted as a new standard, VW would likely use this technology in its EVs. That being said, ultra-quick inductive charging probably isn't in the cards. VW's next-generation batteries can use cylindrical, pouch, or prismatic cell designs. This flexible architecture allows the company to adapt to whatever technology jumps ahead. But for the time being, VW will use prismatic and pouch cells. On that note, VW has also walked back the Budd-e range claims based on the European cycle, and says that an estimate based on the US EPA cycle for a vehicle in this configuration is closer to 233 miles.

Wondering about how VW will implement the cool gesture control technology? VW has revealed that the system is IR-based to keep costs down and make it an affordable technology. Lastly, VW expects all the improvements to the infotainment system shown in the e-Golf Touch to spread to all MIB-equipped vehicles quickly – within the next year. The original, edited piece continues below.

A no-emissions future must look awfully good from scandal-wracked Wolfsburg, and so the Budd-e concept is Volkswagen's loaf-shaped crystal ball from which to predict it. Think of the Budd-e as less of a vehicle that may actually see production, and more as a fun box to house all sorts of not-quite-ready mobility and connectivity technology.

Interested in what Volkswagen has up its sleeve in the short term? Go read our coverage of the e-Golf Touch, which is the near-future technology implementation showpiece at CES. The Budd-e, a reimagining of the Bulli-cum-Microbus concept, merely "tells a story about future technology" rather than being indicative of a future minivan revival, VW spokesman Darryll Harrison told Autoblog.

VW started talking about the MEB platform back in the in the wake of the emissions scandal, envisioning it as a path forward for virtually any vehicle in its extensive brand portfolio. Taking Budd-e at face value, it's essentially a tall box built around a dual-motor skateboard chassis. A flat battery pack of a theorized 101-kWh capacity takes up most of the vehicle's floor. The front houses an electric motor powering the front wheels and the motor controllers. Out back, handling is by multi-link suspension and a second electric motor provides extra traction. 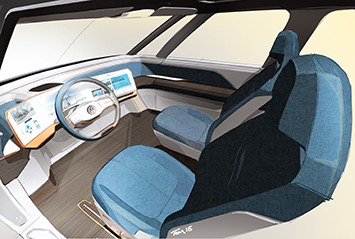 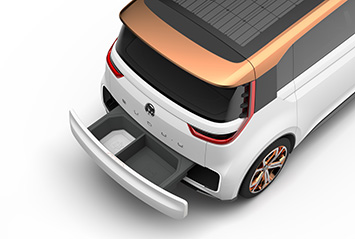 While the company claims that the Budd-e represents a vehicle that has 373 miles of range and can charge to 80 percent of battery capacity in about 15 minutes, this doesn't represent any technology currently available to VW. These numbers are projections about where VW thinks battery technology will be by the end of the decade.

Does VW have equipment to deliver these range and recharging features yet? Harrison admitted that VW is working on developing these technologies right now for use in the future. So Budd-e is most emphatically not a 373-mile-range EV prototype – yet. It's what a future EV with that kind of range might look like, if the right battery pack and charging technology come along.

Budd-e is a peek at what future technologies VW is interested in pursuing. Inside, it's a hypermodern lounge space with reconfigurable seating and huge touchscreen panels. Buttons have been largely replaced, in Budd-e's hypothetical layout, with gesture controls and smooth touch capacitive surfaces with variable haptic feedback. Like many manufacturers thinking about connectivity, VW believes you'd use a car like this to interact with your smart home or office, and more importantly, you'll use it to consume media and messaging. Instead of mirrors, the "e-Mirror" will show outside images on smaller dedicated displays in the cabin. And VW abandons the hard separation between gauge cluster and infotainment. Budd-e predicts a Virtual-Cockpit-on-steriods approach, with a massive 12.3-inch curved screen in front of the driver that blends into a 13.3-inch display in the center console. VW wants you to think of this as an "information hub" rather than two distinct areas displaying two different types of information.

Being unhinged from needing to demonstrate the feasibility (or practicality) of any of these ideas, Budd-e shouldn't be evaluated as a serious proposition. It's a thought experiment, a pure concept. On that point, Harrison told us that Budd-e isn't "indicative of a future direction ... but it does play on the idea of your car as a living space." A large box does make for an effective "activity space", so if VW ever gets serious about implementing these fanciful ideas into a real car, perhaps it'll look something like this modernized Microbus.