Alex Kierstein
The latest Camaro Z28, the enthusiast darling of the somewhat frumpy fifth-generation pony car, only hit the scene in 2014. It housed the wonderful 7.0-liter, naturally-aspirated LS7 small block V8 and featured a ton of aero bits. The trickest pieces may have been the dynamic spool valve shocks, legitimately race tech for the road. So with the new Camaro out in the wild, we were wondering what a new Z28 might look like, and thus, commissioned these renders based on our best guesses as to what a future Z28 might be.

Since Chevy didn't stray too far from the Zeta-chassis Camaro formula with its new Alpha-based car, our vision of a new 2017 Camaro Z28 likewise is a sequel rather than a reboot. The exterior styling and aero details are similar, but sleeker. The defining and protruding front splitter is back, but it's smoothed slightly and better integrated. It shares quad exhaust pipes with the lowlier SS, but they're of the beveled Z06 variety, and sized up to a howitzer caliber. Instead of a weak faux rear fender vent, our version gains a real brake cooling duct. Some iconic elements, like the hood extractor vent and the large decklid spoiler, remain.

What we can't see, we have to speculate on. As the track-focused, hardcore pony car in the Camaro lineup, the Z28 will have to do battle with the Ford Shelby Mustang GT350R. There's simply no avoiding it. And whereas Ford distinguished that car with a 5.2-liter, 526-horsepower, flat-plane-crank V8, Chevy is likely to look to the parts bin to find motivation. This isn't a knock; the LS and LT-series small block V8s are both numerous and power-dense. And there's one engine that seems to do the trick: the LSA, last seen in the old CTS-V and still on sale in the Camaro ZL1 (and of course, still being produced as a crate engine). 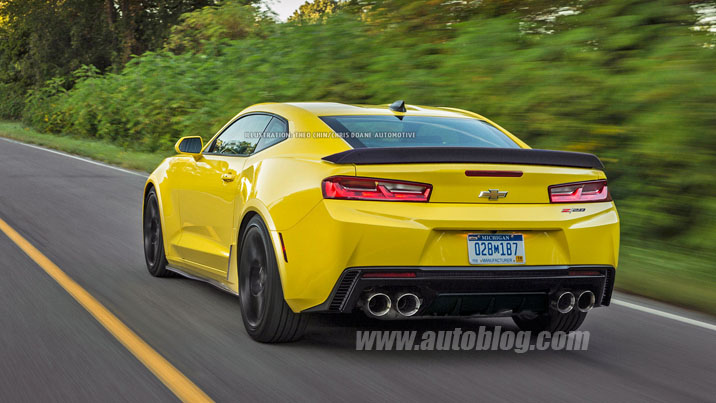 In ZL1 form, the LSA makes about 580 hp, which is a nice margin over the GT350R. It's also a high-zoot but not top-of-the-line mill, having been mostly superseded by the 650-hp LT4. That puts our probable Z28 far enough behind the new CTS-V and current Corvette Z06 in the pecking order to be a safe bet, without hobbling it with the LT1 shared with the Camaro SS and regular Corvette.

Will those trick spool-valve shocks from Multimatic make it to the Z28 again? Ford is taking the GT350R very seriously, and if the expensive but supremely capable suspension system is required to manhandle the Shelby at the track, you can bet that Chevy will pony up for it. Same goes with those expensive Pirelli Trofeo R tires, which are stickier than a gummi bear on a hot dashboard. After all, even more than the Shelby versions of the Mustang, the Z28 doesn't actually need to be profitable. It just needs to rub off enough track cred onto lesser version to win the hearts and minds of Camaro SS buyers.

No one's saying the Z28 will even return, but if it does, this is our best guess (and secret hope) of what it'll be like.