The latest Takata victim wasn't even old enough to drive

Pete Bigelow
The latest likely victim of an exploding Takata airbag was a 13-year-old boy too young to hold a driver's license. Circumstances surrounding the accident which claimed his life in July remain unclear, but federal safety officials said Wednesday the boy was the eighth fatality in the United States and ninth worldwide linked to defective airbags made by global supplier Takata.

Transportation officials didn't disclose the identity of the driver Wednesday, but details of the accident released by federal safety officials matched those of a crash that occurred in the wee hours of the morning on July 22 in Mercer County, Pennsylvania.

The boy drove a 2001 Honda Accord coupe that belonged to a family member at 4:45 AM, heading east along State Route 58 in Findley Township. It remained unknown Thursday why the boy, a resident of nearby Grove City, was behind the wheel or what caused him to lose control of the vehicle. Police said he drove off the side of the road, down an embankment, and into a wooded area. The car traveled approximately 315 feet before hitting a fallen tree, according to initial reports of the accident from KDKA-TV. A report in the Pittsburgh Post-Gazette said the boy did not have his seat belt fastened.


"We are working hard to understand this crash and the cause of the injuries that resulted in this fatality."

Firefighters rescued the boy, and he was flown to St. Elizabeth's Hospital in Youngstown, Ohio. He succumbed to "severe" injuries several days later, according to a National Highway Traffic Safety Administration spokesperson.

Instead of properly deploying during a crash, Takata's faulty airbags, which have prompted 44 recalls over the past decade and affect 19 million cars made by a dozen automakers, spew lethal amounts of shrapnel at vehicle occupants. Honda said Wednesday it had sent a reminder notice about the ongoing recall to the vehicle's current owner one day before the crash.

"We are working hard to understand this crash and the cause of the injuries that resulted in this fatality," Honda spokesperson Chris Martin said. "Honda has not yet had the opportunity to inspect the vehicle, and we are coordinating with representatives of the family, NHTSA, and Takata to inspect the vehicle as quickly as possible to see if the Takata airbag inflator ruptured in this crash."

In Pennsylvania, teens cannot obtain a learner's permit until age 16. Pennsylvania State Police did not return multiple requests for more information on the accident Wednesday.

Martin said Honda issued a recall for the vehicle in February 2010 and made "numerous attempts" to contact the previous owner of the car between 2010 and 2012, but the company's records indicate the required repairs were never made. 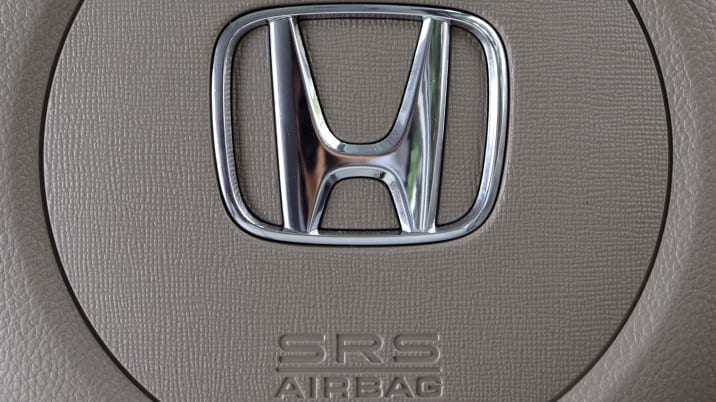 It is unclear whether the current owner knew about the defective airbag when purchasing the vehicle, but no disclosure was required. Unlike federal law for new cars, no law mandates that used vehicles under recall get fixed before being sold. It's a safety gap some members of Congress have sought to change.

Shortly after NHTSA officials revealed what they called a "tentative" link between the fatality and the faulty airbags, two Congressmen criticized the federal safety agency for what they perceive as a lethargic response to the long-running airbag crisis, noting that nationwide, only 27.1 percent of car owners have gotten their vehicles fixed.

"Today's update from NHTSA reiterates what we already know: the current pace of recall efforts is completely unacceptable and a massive disappointment," Sens. Ed Markey (D-Massachusetts) and Richard Blumenthal (D-Connecticut) said in a joint statement. "While they have increased somewhat in the last few weeks, these completion rates are dismal. NHTSA and automakers deserve a lump of coal this year for failing to get their act together to get every potentially deadly airbag off the road."