Rumors are again swirling that Honda could have a new sports car under development to slot below the forthcoming NSX. Autocar claims the model would revive the S2000 name, but offer 1.5- and 2.0-liter turbocharged units at the front to drive the rear wheels.

Autocar alleges this info comes from unnamed "company insiders," and asserts the new S2000 could have a base model with a 1.5-liter turbo that makes about 180 hp – almost 60 hp down from the original convertible. However, a hotter version – possibly with Type R badging – would reportedly have a detuned form of the 306-hp 2.0-liter in the Civic Type R. Both trims would have a six-speed manual.

Competing rumors contend that Honda could be developing two different performance models. Patent images suggest the company might have a smaller version of the NSX under consideration in addition to the rumored S200 revival. The mid-engine coupe would allegedly use a hybrid powertrain based on the Civic Type R's engine to make a total of about 400 hp. However, Autocar claims the S2000 successor has the higher priority of the pair, but it doesn't mention where the info comes from.

The Honda S660 kei car on sale in Japan shows that the brand is willing to dabble in new sports cars, but that convertible isn't practical for the US market, according to the automaker's bosses. Dealers meanwhile continue to beg a performance model in the lineup, so it's possible one of these rumored projects eventually could arrive in showrooms. 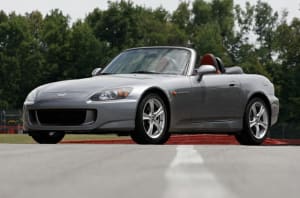