Mercedes-AMG working on a successor to the SLR?

Jonathon Ramsey
It's been mere days since Mercedes-AMG chairman Tobias Moers told journalists at the LA Auto Show that his brand would not develop a super coupe to challenge the likes of the Porsche 918 Spyder and Ferrari LaFerrari - at least, not right now. Nevertheless, German magazine Auto Bild has the story that AMG is "considering" a successor to the Mercedes-Benz SLR McLaren, which, technically, wouldn't need to be a competitor at the great-white-shark end of the supercar spectrum.

According to Auto Bild's sources, Considerations have apparently gone far enough for engineers to be debating whether to develop such a car on the brand's Modular Sports Architecture (MSA) that will support the next-generation SL-Class, which would necessitate a front-engined car, or to do a mid-engined monster.

An MSA-based coupe would use a supercharged V6 to power the rear wheels with an electric motor working the fronts, and somewhere around 650 horsepower would get the help of active aerodynamics to make the most of its potential. Production numbers of roughly 3,000 units per year are tied to a price of at least $260,000 or more.

Discussions around a mid-engined supercar, on the other hand, go all the way with composite body wrapped around a supercharged V8, a total of of supposedly 1,050 horsepower with the aid of two 125-kW motors on the front axle, all-wheel drive and lots of ground-effects aero to tame it, and a price of "over one million euros" for a limited run of no more than 750 units. Either car would begin with a coupe model, followed by a roadster, a Black Series, and a GT3 version.

The SLR could be considered in between these two, but closer to the MSA-based car. A collaboration between Mercedes and McLaren, it made 617 horsepower from a front-mounted, supercharged 5.4-liter V8 and cost $450,000 at a time when the Porsche Carrera GT cost $444,000 and the Ferrari Enzo cost $643,000. It's biggest problem was that it wasn't very good as a supercar, and Auto Bild posits that AMG might want to correct that blemish on the corporate record. Moers said at the auto show that AMG doesn't have the engineering capacity right now to do this kind of car. He also said he thought the marketplace wouldn't accept AMG as a hypercar brand, but talks with customers in prime markets "give me a different view to that." 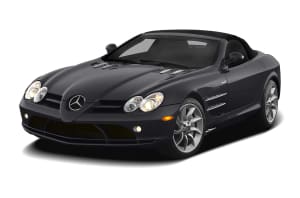