Honda brought some seriously cool concept motorcycles to this year's EICMA show in Milan, Italy, and two of the wildest were a pair called the CBSix50 and CB4. The company based both of them on the CB650F and its four-cylinder engine, according to Lanesplitter. However, the designers overhauled the styling to imagine one of them as a scrambler that could play a little in the dirt and the other as an urban-focused naked bike.

The CBSix50 (pictured above) looks ready for any environment thanks to the chunky treads on the tires, guards on the handlebars, and a skid plate to keep the vital mechanical parts safe. The camouflaged body might blend into the city a little, but the bright red accents don't allow the rider to hide completely. 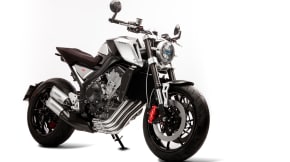 Honda's designers craft the CB4 concept (pictured right) to be ready for the street. The bike's body wears a modern mix of white and black, but red accents on the calipers and suspension provide a pop of color. The front features a round headlight for a more classic style than the rectangular unit on the CBSix50. The cycle also gets more traditional road tires than its sibling, and the stubby exhaust provides an aggressive look. You can easily imagine this machine slicing through crowded traffic in cities all over the world. Check them both out in the gallery above.