No Superlatives Needed: This Is The Bentley Of SUVs

There was once a barrier that separated our Arcadian, four-dimensional space from an uncanny cosmos where a $229,100 SUV makes irrefutable business sense. That wall is gone, and the Bentley Bentayga broke it.

We're accustomed to powerful SUVs. The Mercedes-Benz G65 AMG makes the Earth weep on account of its 621 horsepower and 738 pound-feet of torque. The Bentayga is shy of those figures, with 21 fewer horses and 74 fewer pound-feet. We're also accustomed to quick SUVs; the Porsche Cayenne Turbo S hits 60 miles per hour in just 3.8 seconds. The Bentayga runs that race 0.2 seconds slower. And of course, we are accustomed to luxurious SUVs that fear no obstacle or load. The Range Rover Autobiography can swim its leathers and veneers through 35.4 inches of water, surmount nearly 12 inches when toiling off-road, and tow 7,716 pounds. The Bentayga can 'only' manage 19.6 inches of water, 'only' gets to 9.64 inches on its tippy toes, and is 'only' rated to tow 7,714 pounds.

None of these facts are listed to harp on the Bentayga. It isn't Bentley's way to make rank by being the best in every category. Instead, the Crewe brand brings all the boys to the yard by merely being excellent across the board. The Continental GT isn't superlative at any one thing, but no other vehicle that can carry four people is as fast and as capable and as dynamic, and only Phantom-level Rolls-Royces can touch it for luxury. 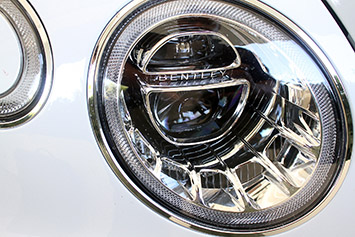 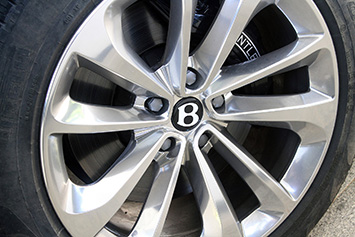 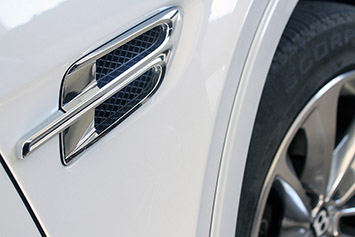 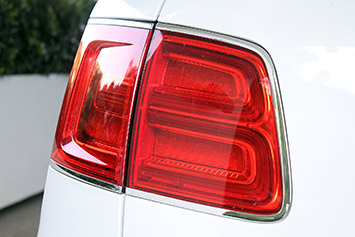 The Bentayga is not the Continental GT of SUVs, it is "the Bentley of SUVs."

But here's an important clarification: The Bentayga is not the Continental GT of SUVs, it is "the Bentley of SUVs." The automaker describes the mission as, "driving, luxury, performance." The interior advances the current design language with a two-piece instrument panel – an upper portion that slides through the center console in a "U" shape, and a lower portion that connects the console to the center tunnel. Bentley poses this as a riff on its flying wing badge, but it actually comes from interior designer Darren Day's wish to fit an IP with a steeper rake.

The size of an instrument panel is limited by the width of the door openings because the dashboard doesn't go in until after the body is welded together. Day wanted passengers to be able to rest their legs on the buttresses tying the IP to the center tunnel, but his one-piece design was too large to fit through the doors. The two-piece result is sleeker and more artful than on any other Bentley, and more cohesive because it gives the console a cradle to reside in. It's the centerpiece of the interior. The seat design is new, and they reverse Bentley's former habit of using plain edges with quilted seating surfaces. The company says this new effect is more comfortable. We'll take Bentley's word for it – these cars are already supremely soothing. The steering wheel is new, with a tidy diameter and a not-too-thick rim. The infotainment system is new, with hard buttons flanking an eight-inch touchscreen with expanded options. The HVAC borrows from sister brand Audi, with LED readouts inside large knobs. That said, we wish Bentley had borrowed the glass buttons from the Mulsanne instead of settling for black plastic. The shifter is finally, 12 years after the Continental GT showed up, the modern, meaty grab handle the brand has needed, and not just something that feels plucked from a two-generations-ago Passat. 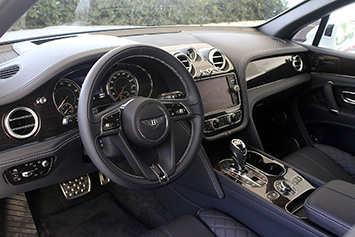 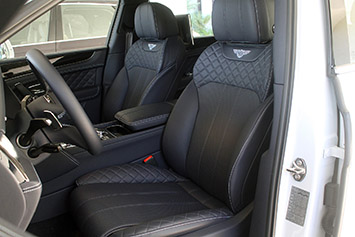 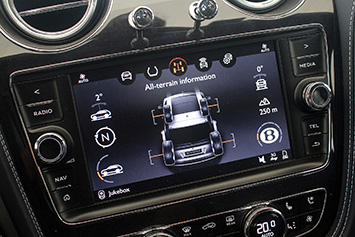 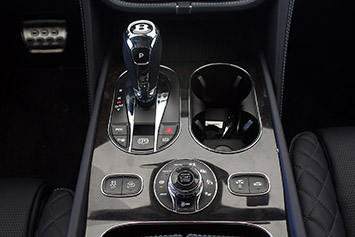 The 6.0-liter, twin-turbo W12 is tuned to 'just' 600 horsepower and 664 lb-ft in this application. The new engine comes with tech like two twin-scroll turbos, twin-injection (direct and port), and cylinder deactivation that can shut down six cylinders and opens the valves on the unused cylinders to let the pistons slide freely. This 6.0-liter is 88 pounds lighter and 10-percent more efficient than the W12 in the less powerful Continental GT.

What this means is that the Bentayga is flagrantly quick. Spanish urban planners have designed Malaga so that low-speed-limit residential roads end at right angles with the highway, bereft of on-ramps. From a stop sign, then, you make a right turn and need to be going 120 kilometers per hour as soon as possible. The first time we drop all 12 of its warhammers, shooting out of the highway entrance like some 5,379-pound projectile from a rail gun, we overtake traffic so quickly we wish for a parachute lever to go with the six-piston front brakes. The Bentayga weighs 264 pounds more than the 582-hp Continental GT, but gets from 0-60 mph 0.3 seconds quicker. 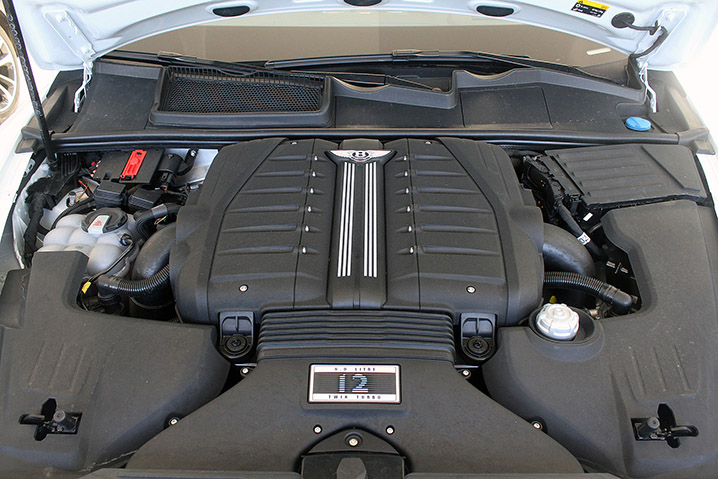 No part of the Bentayga experience is jarring. Customers will simply call it, "fast."

It turns with some speed, too. On top of the self-leveling suspension and continuous active damping, the Bentayga has electronic roll bars powered by a separate, 48-volt system. The alternator in the standard 12-volt system energizes a supercapacitor. Put the SUV into Sport mode, the supercapacitor powers rotary actuators in the front and rear roll bars so that the Bentayga remains level through turns. Yes, the Continental GT will still get ahead come the esses, but it wouldn't be a rout.

When not being flogged in straight or curved lines, the Bentayga feels like a Mulsanne Speed on a diet and a stepladder. Throttle tip-in is relaxed, bordering on the lazy. The electronically assisted power steering is heavily assisted, but not dead; it's direct, with ample weight and enough feedback. The variable rack enables trim maneuvers in tight spots. The eight-speed transmission and two turbos don't always work together with ultimate silkiness; sometimes the Bentayga isn't sure it wants to answer a request for mid-level acceleration with downshifts or the turbos, so it gets halfway through deliberations and grabs a little too much of both. But no part of the Bentayga experience is jarring. Customers will simply call it, "fast."

Only a very small percentage of Bentayga customers will actually use their cars off road. Still, we head into the Spanish scrub to test the SUV's articulation, because it's engineered to handle extremely rough stuff. The All Terrain Specification – included in the US, a five-figure option elsewhere – adds four off-road drive modes: Snow & Grass, Dirt & Gravel, Mud & Trail, and Sand Dunes. Metal guards and composite protective plates are installed underneath to make sure low-hanging fruit like the engine sump and fuel tank come back intact from your champagne lunch in the glade.

We think a more important measure of Bentley's off-road manners will be the three-piece, $32,000 picnic hamper set.

We're all familiar with such terrain switches by now, and it works as billed here. A readout in the infotainment touchscreen and the electronic screen between the dash gauges will clue you into every angle of inclination, as well as the angle and height of each wheel. The oil system is upgraded to ensure lubrication at up to 35-degree lean angles, and a brake-actuated locking diff ensures traction. Bentley has to include the capability; can you imagine the blasphemy of a Range Rover owner retrieving a Bentayga owner from the fen after the fox hunt? Still, we think a more important measure of Bentley's off-road manners will be the three-piece, $32,000 picnic hamper set.

Rolf Frech, board member for engineering at Bentley, says the primary request customers have for the vehicle is lots of driver assistance features, so engineers poured the whole bin of Volkswagen Group driver aids over the Bentayga. The City Specification, standard in the US, and the $7,780 Touring Specification, ring the SUV with five cameras, 12 ultrasonic sensors, and short- and long-range radar. So equipped, it has adaptive everything and will steer itself; night vision can identify pedestrians, cyclists, and large animals, and it can stay in its lane automatically in traffic without road markings, using the columns of cars next to it as guides. 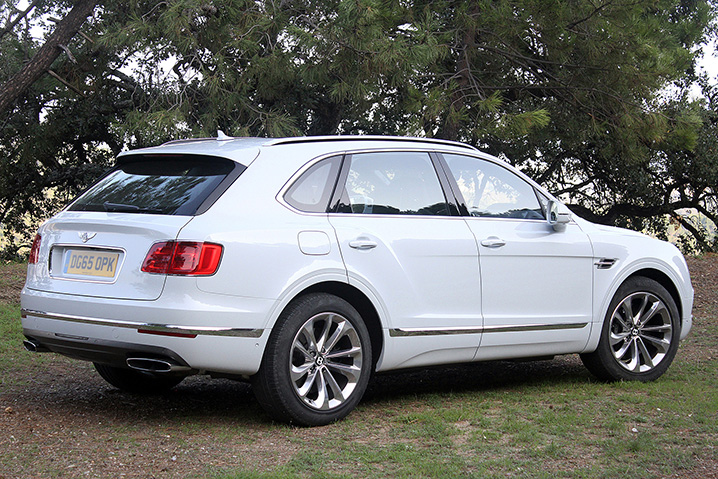 the reason the Bentayga works, and will sell, is because it feels like a Bentley.

So, we've come all this way without a word on the exterior styling. The Bentayga has had a very public gestation, much of which involved torches, pitchforks, and mobs screaming, "Kill it before it reaches town!" when the first EXP 9 F concept made land. We find this production effort an improvement, and think it will find many good homes among those whose bank statements can support their desires. Bentley CEO Wolfgang Dürheimer says the business case only requires 3,500 annual sales, but the order books are already at 5,500 and counting. Bentley has the only show going at this altitude until Rolls-Royce, Aston Martin, and Lamborghini make their presences known.

We'll preface this with an apology to Bentley lead exterior designer Sang-Yup Lee, who is one of our favorites in the business: the exterior styling has little to do with the Bentayga as a whole. Yes, it looks like a Bentley. But the reason the Bentayga works, and will sell, is because it feels like a Bentley. It is the Bentley of SUVs in that it conducts itself with excellence across categories, then gilds that excellence in hand-stitched hides, book-matched veneers, mineral glass, custom speaker grilles designed to look like fabric stitching, and engineering tolerances of tenths of a millimeter between every chrome bezel and the button it surrounds. That's why it takes 130 hours to build. And the options list defies belief.

Bentley did reserve one superlative for itself with this product: the Bentayga's top speed is 187 miles per hour, faster than anything else out there. Not that it matters, that one feather – this is about the whole goose and the foie gras. And for now, no other SUV out there is simultaneously as fast and as capable and as dynamic as this one, and nothing can touch it for luxury.