If you have a Toyota FJ Cruiser, it could be worth more than you realize. According to Automotive News, examples of the retro off-roader are trading at over 90 percent of their original list prices. And that all comes down to the old principle of supply and demand.

Designed in tribute to the original Land Cruiser, the FJ Cruiser is an old-school, body-on-frame SUV built by Toyota between 2006 and 2014. It went after the Jeep Wrangler with a fixed roof, half rear doors, and retro styling. That gave it the throwback appeal of little hatchbacks like the Mini Cooper or Fiat 500, but in a more rough-and-tumble package.

Though Toyota sold a solid 50,000-plus examples of the FJ Cruiser in the US during its first two years on the market, sales declined once the novelty wore off. In its third year, FJ sales in the US amounted to fewer than 30,000 units, after which annual sales dropped into the 10,000-unit range. Last year Toyota sold less than 15,000 of them before pulling the plug. At that point, the FJ was one of its slowest-selling trucks, ahead (ironically) of the current Land Cruiser. Toyota sold just over 3,000 examples of the Land Cruiser last year, combined with another 4,000 of the Lexus LX, which is essentially its upscale twin.

All told, Toyota sold around 220,000 FJ Cruisers in the US over the course of its lifespan, making it a rather rare beast – especially when you consider that it sells more than twice that number of SUVs altogether in this country every year. Despite its scarcity, it retains a loyal following. So when someone wants to get their hands on one, they're often forced to pay top dollar. The FJ tied for ninth place on our recent list of cars with the lowest depreciation rates, and was the only model on the list that has since been discontinued.

According to NADA data cited by AN, trade-in prices for a 2012 FJ Cruiser are holding at over $25,000, compared to their $27,840 sticker price when new. That amounts to a rather incredible 90.8 percent resale value. Some low-mileage examples are even listing for upwards of $50,000; compare that to a Wrangler from the same year that holds a trade-in value of 68.1 percent of its original list price. But then the Wrangler remains in production at far higher numbers than the FJ ever achieved. 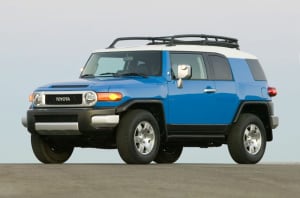