Updated, But Still Comes Up Short

View All Specs
1 Review
Here's a bewildering statistic – General Motors sold over 347,000 GMC Terrain and Chevrolet Equinox crossovers in 2014, making the Theta platform twins the best selling vehicles in their segment. GM sold more Equinox/ Terrain crossovers than Honda did CR-Vs, Ford did Escapes, and Toyota did RAV4s. After a week behind the wheel of the 2016 Terrain Denali, we can't fathom why GMC's entry, which accounts for nearly a full third of GM's annual small CUV sales, has been so popular.

An inefficient engine, cheap interior plastics, uncomfortable seats, a shortage of technology, and a high price left us questioning why anyone would order this Denali over a Titanium-trim Ford Escape, a Jeep Cherokee Limited, or a Hyundai Santa Fe Sport with the Unlimited Package.


Perhaps the best thing we can say about the Terrain is that GM has been damn smart with this update. Not because of what it did, of course, but what it didn't do. With over 95,000 sales in 2012 and 2013, over 100,000 sales in 2014, and the pace for over 110,000 sales in 2015, where's the incentive to add options and improve dynamics to match the competition? It simply isn't there, which makes the 2016 Terrain's multitude of shortcomings a prudent financial decision. We can only hope, though, that GM keeps these failings in mind when it comes time to redesign Theta-platform CUVs. 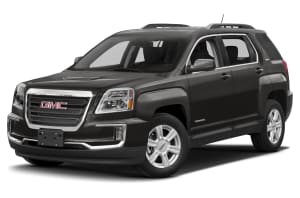