Yes, This Is The New One View All Specs
Internally, Audi refers to the A4 lineage with a B designation. Why the discrepancy? The model legacy traces back to the 1972 Audi 80, and the A4 name wasn't adopted until 1996 for the North American market. So the fifth-generation A4 is code-named B9. There is no confusion about what this car means to Audi. In 19 years, the brand has sold more than 12 million A4s around the world, which puts this new generation on the A-list when it comes to brand importance.

If you squint, the new car looks like a facelifted version of the last-generation facelift unveiled in 2013. We get the same impression of the new A4 as we do with the third-generation Audi TT: it hasn't been comprehensively reconceived, it's been comprehensively re-detailed. But with a move to the updated VW group platform known as MLB Evo, 90 percent of the components on this car are new. On the outside, those changes are reflected through deeper sculpting on a body that's about the same height as before but 0.5-inches wider, one-inch longer, and with a wheelbase stretched 0.7 inches. The tweaked grille separates reworked Bi-Xenon headlights, which are standard across the lineup now – halogens go bye-bye. LED headlights are optional, as are the matrix units in other markets. 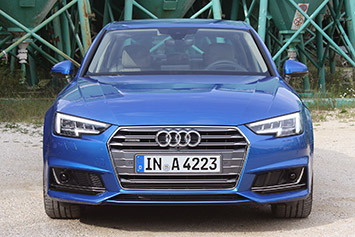 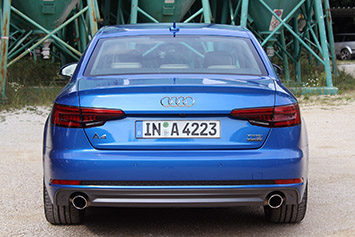 Audi claims US-market cars will lose anywhere from 70 to 100 pounds depending on specification.

Above those lights is a version of a clamshell hood – its shutline forms the front third of the pronounced shoulder line along the sedan's flanks. Audi designed a new hinge that keeps the hood lined up properly over the life of a car because small misalignments show more easily on the vertical seams. In back there are updated taillights, a standard rearview camera, and a trunk opening that's an even one meter across.

In the press presentations, any conversation quickly turns to weight loss and aerodynamic efficiency. The only curb weight we have from Audi so far is for the base sedan, empty and without a driver, with the 1.4 TFSI engine that we don't get, coming in at 2,910 pounds. The current US-spec A4 is listed at 3,583 pounds, and Audi claims US-market cars will lose anywhere from 70 to 100 pounds depending on specification. About 35 pounds of that comes from the chassis, with new forged aluminum links on the suspension, fixed-caliper, four-piston brakes up front, and wheels that are never heavier than 26 pounds. The rest of the weight loss comes from the body, mostly through greater use of aluminum. The most aerodynamic version of the A4 now slices the air with a 0.23 coefficient of drag. That's just one point behind Cd of 0.22 claimed by the Mercedes-Benz CLA 180 Blue Efficiency. The A4 does this with details like the nearly flat underfloor, shrouds over the rear suspension arms, and a spoiler under the gas tank. 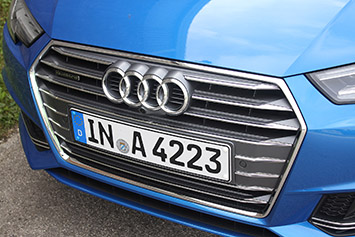 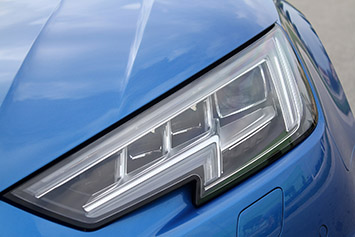 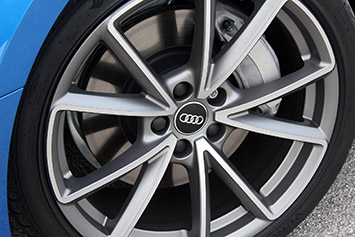 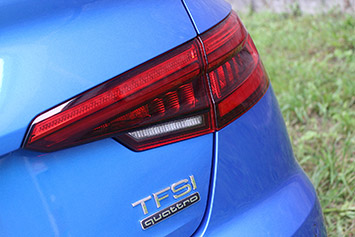 The tech story continues under the hood, and the A4 benefits from advances first revealed in the latest A6 and the Q7. The engine menu for the US contains two 2.0-liter four-cylinders, one gas, and one diesel. The gas motor is the third-generation EA888 unit just introduced in the A6, with 252 horsepower and 273 pound-feet of torque. With novel features like an exhaust manifold integrated into the cylinder head and dual (manifold and direct) fuel injection, we found this to be plenty of motor in the larger sedan. Audi claims the 2017 A4 with this engine goes from 0-62 miles per hour in 5.8 seconds, which is the same time given for the A6 to get from 0-60 mph. We figure there'll be some daylight between them when outsiders get to testing.

We get the more powerful 190 hp version of the diesel, which puts out 295 lb-ft of torque. Upgrades include two balancing shafts, reduced friction, and separate cooling circuits for the block and head. It's said to hustle the A4 from 0-62 mph in 7.3 seconds. Both engines shift via an improved seven-speed, dual-clutch transmission, which boasts lower friction, less weight, and more efficiency. The S4 will get an eight-speed automatic. At this point there's no hint of a manual anywhere in the lineup for the US. 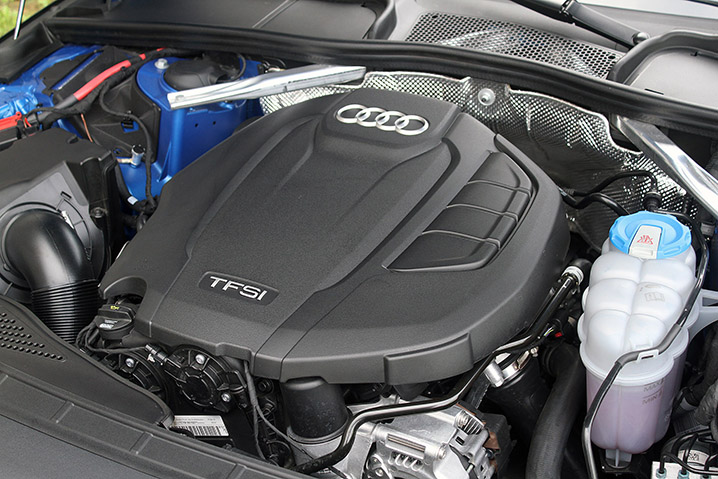 Virtual Cockpit is just as outstanding now as when we first tried it a year ago.

Inside, the A4 can be had with the 12.3-inch virtual cockpit first shown on the Audi TT, but mated to an MMI system that mimics the one in the Q7. The pace of technology seems to move as fast the fiber optics that enable it, yet we feel the Virtual Cockpit is just as outstanding now as when we first tried it a year ago. The dash cluster is controlled through buttons on a new steering wheel – one with a magnesium rim for more weight loss, and a compact airbag module for better dash visibility. The steering wheel used to have one purpose; now it's a universal remote control. Audi has maintained simple, intuitive usability.

The base MMI system gets a seven-inch infotainment screen atop the dash while MMI Plus gets an 8.3-inch screen. Both are controlled via a large knob with an integrated touchpad. Eight audio pre-set buttons sit forward of the MMI controller. Speaking of audio, the top-flight stereo is a 755-watt Bang & Olufsen unit with 19 speakers. Additional MMI functions, depending on optional packages, include emergency services and vehicle status reports inside Audi Connect, remote vehicle control through a smartphone app, and Apple CarPlay and Android Auto. Tech tidbits elsewhere in the cabin include a full-color head-up display, wireless inductive charging in the "phone box" inside the center armrest, and 30 available hues of ambient lighting. 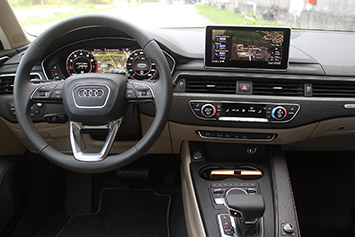 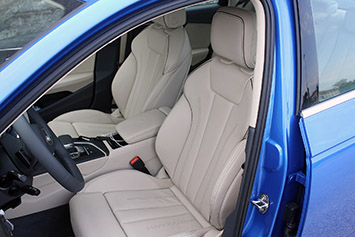 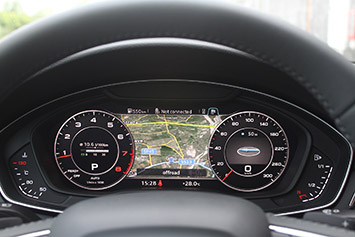 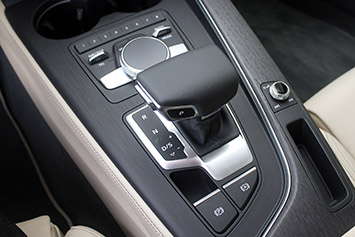 Controls for the deluxe version of the climate system take a huge leap forward. Getting it hot in here has never been less cluttered. Driver and passenger temperature knobs contain TFT displays (as in the TT). The central LCD is above five capacitive rocker switches. Rest your finger on one of the switches and the options it controls are displayed on the screen, push it down or flick it up to toggle through the choices. It's quick, clear, and easy.

The cabin is a good place to keep cool, too. The growth in dimensions means more headroom and shoulder room in front, more legroom in the back. New seats are large, pleasing to the eye, and comfortable. The center section in the band of vents across the is a design element, not controllable, although it does provide passive ventilation. Materials are pure Audi excellence, with hides and stitching that make the eye happy, open-pore wood, metal finishes that look the part, and that Teutonic sense that everything is in its place. To keep you safe in that cabin, the A4 comes with a suite of optional driver assistance safety systems seen on the Q7 like pre-sense city and traffic-jam assist.

Audi said it stressed fuel economy and dynamics in the new A4, with five-link suspensions front and rear, major components forged in aluminum, addressing the latter aim. An optional suspension with Continuous Damping Control will offer Comfort and Sport modes, and lower ride heights of 0.4 and 0.9 inches. 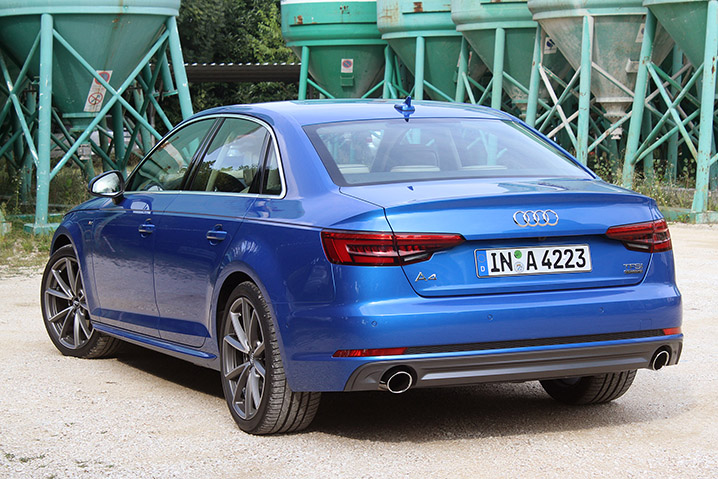 The not-so-good news is that we didn't get much time to check out the driving experience.

Everything so far is the good news in the new A4, most of which you know from our Deep Dive and previous press releases. The not-so-good news is that we didn't get much time to check out how this translates to the driving experience. We spent our paucity of minutes behind the wheel of the 2.0-liter TSFI on the Italian autoroute. The few rural B-roads we drove were through villages or packed with cyclists, and oncoming traffic.

We drove European market A4s as well, and our combined impression leaves our assessment mixed. At least the iffy bits are a matter of tuning, which could change before the A4 comes stateside as a 2017 model. As expected, the engine provides plenty of motivation for the new sedan, but the actuation is somewhat rough. Throttle tip-in is a tad eager in Sport mode. It's smoother in Drive, but that setting we wish the seven-speed transmission jumped to attention a little more quickly when we asked for extra go. That transmission tuned for our market in the A6 is part of what makes that car so enjoyable to drive, so we're optimistic for the A4. Audi says the aeroacoustics of the new A4 match the A8, and it seems as quiet until you put the motor under duress. The suspension, as far as we could tell, is perfectly tuned.

We'll have to wait for a second drive to discover what the 2017 A4 really has going for it dynamically. Everywhere else it shows a clear advance on the eighth-generation car, even if you need a moment alone with it to note the bodywork alterations. We hope the handling shows commensurate progress. 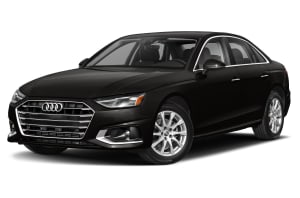