The 2016 Honda Pilot earned a Top Safety Pick+ rating after tests by the Insurance Institute for Highway Safety. The crossover scored the agency's top Good score in all five evaluations, including the often tricky small-overlap frontal crash. The latest results give the 2016 Pilot the highest possible results from both NCAP and IIHS.

In the small-overlap frontal crash, there were only four inches of intrusion in the passenger compartment, and the airbags did their job of protecting the dummy's head. Sensors showed a low risk of significant injuries. In comparison, the IIHS gave the 2015 Pilot Good scores in four tests, but the CUV had a Poor rating, the agency's lowest, in the small-overlap test.

The optional Honda Sensing suite of safety functions put the Pilot over the top for the + score, and the tech earned a superior rating from the IIHS. The system combines a windshield-mounted camera and radar behind the grille and is available on the EX trim and above. It includes collision mitigating braking, a forward collision warning, lane keeping assist, lane departure warning, adaptive cruise control, and road departure mitigation.

The fully redesigned 2016 Honda Pilot (automobiles.honda.com/pilot/) has received a 2015 TOP SAFETY PICK+ rating from the Insurance Institute for Highway Safety (IIHS) when equipped with optional front crash prevention, bringing Honda one step closer to fulfilling the company's goal to be the first three-row mainstream SUV with the highest available U.S. government (NCAP) and IIHS safety ratings. This IIHS distinction includes a top rating of GOOD in five IIHS crash test modes including a top score of GOOD in the Insurance Institute's stringent small overlap frontal crash test. The 2015 TOP SAFETY PICK+ designation is awarded to vehicles that also have an available front crash prevention system that earns an advanced or superior rating from the Institute. The 2016 Pilot offers an available frontal crash prevention system that earns a top rating of superior.

"The 2016 Pilot is not only the most technologically advanced Honda vehicle on the road today, but the top choice for family SUV buyers interested in safety performance," said Jeff Conrad, Honda Division senior vice president and general manager. "No other midsize mainstream SUV on the market today can match the comprehensive suite of Honda Sensing™ advanced safety and driver-assistive technologies on the new Honda Pilot."

Available on Pilot EX trims and above, Honda Sensing™ can help improve drivers' situational awareness with its various systems, which include the Collision Mitigation Braking System™ (CMBS™) with Forward Collision Warning (FCW), Lane Keeping Assist System (LKAS), Adaptive Cruise Control (ACC), Lane Departure Warning (LDW) and Road Departure Mitigation (RDM). These systems benefit from the adoption of a sensor fusion technology integrating the capabilities of a windshield-mounted monocular camera and front grille-mounted millimeter wave radar system to provide enhanced sensing with the ability to identify and anticipate multiple collision scenarios, including those involving a pedestrian. When the system anticipates a collision or road departure, it can initiate warnings and, in certain instances, initiate emergency braking and steering.

Standard safety equipment on all Honda models include Vehicle Stability Assist™ (VSA®) electronic stability control system, Anti-lock Braking System (ABS) with Brake Assist, frontal airbags, side airbags, side-curtain airbags and a front seat design that can help reduce the severity of neck injury in the event of a rear collision. Honda is also leading the industry in the deployment of rearview cameras, which are standard equipment on all model year 2015 and newer Honda vehicles.

The third generation of Honda's popular three-row SUV Pilot was designed and developed by Honda R&D Americas, Inc., in Los Angeles and Ohio, and is manufactured exclusively by Honda Manufacturing of Alabama, LLC, in Lincoln, Alabama.1

About Honda
Honda has a long history of leadership in the development and application of advanced technologies designed to enhance the safety of all road users, including automobile occupants, motorcycle riders and pedestrians. The company operates two of the world's most sophisticated crash test facilities, in Ohio and Japan, and is responsible for numerous pioneering efforts in the areas of crashworthiness, airbag technology, collision compatibility and pedestrian safety.

The 2016 model's good small overlap performance is a dramatic change from the earlier generation Pilot, which rated poor.

In the test of the latest model, the driver space held up well, with maximum intrusion of 4 inches at the parking brake pedal. The dummy's movement was well-controlled, with the front and side curtain airbags working well together to keep the dummy in place and protect the head from contact with intruding structure and outside objects. Measures taken from the dummy showed a low risk of any significant injuries in a crash of this severity.

In contrast, when the 2014 Pilot was tested, the driver space was seriously compromised. The parking brake pedal moved nearly 17 inches inward, and the door hinge pillar moved in about 14 inches. The dummy's head barely contacted the front airbag before sliding off to the left, as the steering column moved to the right and toward the driver. The side curtain airbag didn't extend far enough forward to protect the head.

Like the old version, the new Pilot has good ratings in the Institute's four other crashworthiness evaluations — moderate overlap front, side, roof strength and head restraints. When equipped with front crash prevention, the redesigned SUV qualifies for TOP SAFETY PICK+.

Vehicles must earn a good or acceptable small overlap rating and good ratings in the four other tests to qualify for TOP SAFETY PICK. The plus sign is awarded to vehicles that also have an available front crash prevention system earning an advanced or superior rating.

The Pilot's optional system is rated superior. The autobrake prevented a collision in the Institute's 12 mph track test and cut the vehicle's speed in half in the 25 mph test. The system also includes a forward collision warning feature that meets criteria set by the National Highway Traffic Safety Administration. 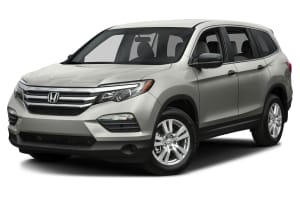