There's nothing wrong with the Mercedes-Benz GLK other than old age, having first sold here in 2009. But with creased, off-road themed styling, a naturally aspirated V6, and a smallish interior, it's out of step with the company's growing line of sport utility vehicles. Even its name is a harsh-sounding outlier. Enter the 2016 GLC.

Mercedes calls this model the second generation of the GLK, but it's closer to a total reboot. The new look follows the smooth design of contemporary Benzes. The spotlight engine is now a spunky turbocharged four cylinder, and yes, the GLC is bigger inside and out. As for the name change, that's part of the latest badge realignment, and the "C" indicates the GLC's position as the crossover counterpart to the C-Class sedan. Now firmly integrated into the Mercedes SUV family, the GLC takes a seat at the table between the entry-level GLA and the larger GLE. 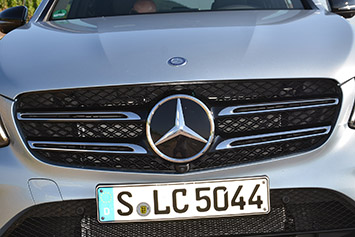 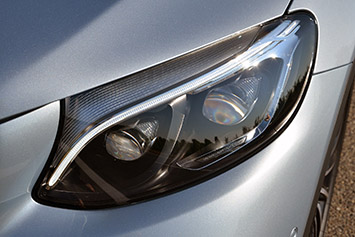 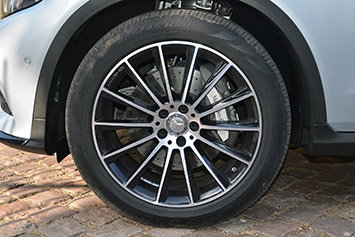 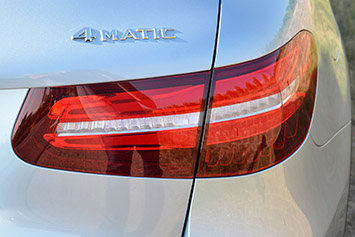 The GLC's fresh appearance has all of the tenets of modern Mercedes design.

We've come to the Alsace region of France to sample this familiar yet evolved utility vehicle. Driving along route A35, we're immediately struck by the turbo four-cylinder's prowess. It's strong from launches when we mash the gas, returns a subtle but pleasing exhaust note, and it's more than capable of picking off slower moving traffic as we dash through the French countryside. We're driving the European-spec GLC250 model, which has the same 2.0-liter engine Americans will get in the GLC300, though the Euro model has 30 fewer horsepower. The US version will be rated at 241 hp and 273 pound feet of torque, the same output as the C300 sedan.

The turbo has big shoes to fill, as it gives up 61 hp to the 302-hp V6 used in the GLK. Mercedes is banking consumers won't miss this raw power, as the GLC's inline-four offers the same amount of torque as the GLK's V6, but much sooner in the rev band. Even in its detuned European state, the I4 demonstrates the kind of urgency that Americans prefer for their grocery-getting people haulers. It's paired with a nine-speed automatic transmission, upgraded from the GLK's seven-speed. There are paddle shifters, though most Americans won't have reason to use them. Sometimes we grab them and lay on the throttle just for fun, and the GLC responds with bursts of speed. 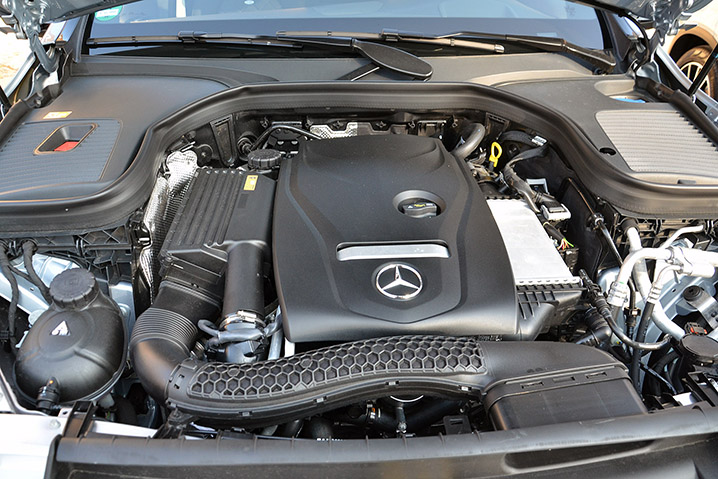 Even in its detuned European state, the I4 demonstrates the kind of urgency that Americans prefer for their grocery-getting people haulers.


The cabin is quiet enough that conversation with a passenger is easy as we navigate a southeasterly path through the Alsatian wine region toward the morning's stopping point. Our tester has the Designo interior package with dark Nappa leather, light stitching, and high-gloss wood paneling broken up by gray trim. The heating, cooling, and infotainment controls are set to the driver's right. A multifunction LCD splits the speedometer and tachometer dials instead of the old three-gauge setup in the GLK. A full-color seven-inch screen sits on top of the center stack. While the GLK had an old-fashioned wooden speedboat vibe, the GLC feels sleek and modern. Even though there's a lot going on, all of the elements are simple to use, and we toggle between the navigation, audio, and other features with relative ease.

That's good, because driving in Europe requires our full attention. There is a lot of foot traffic, and everything from bicycles to trash trucks can and does appear suddenly as we navigate through villages. The steering is quick and responsive. There's play on-center, but it returns more feeling than we expect during evasive maneuvers. The ride is comfortable, exactly what you would expect in a crossover. It smooths most of the bumps and ruts, and there's more than enough ground clearance for daily use. Our most extreme endeavor was jumping a curb to pull a turnaround on a dead-end road. Steel springs with a variable damping system are standard, air suspension is an available upgrade.

Though there's a lot going on, all of the elements are simple to use, and we toggle between the navigation, audio, and other features with relative ease.


We move through the different driving modes, using Eco and Comfort settings for calmer stretches of road. When the nav system shows our route going from a straight line to a path that resembles the shape of intestines, we switch to Sport and Sport+. The GLC gets us through the tight curves unflustered, giving us a boost of confidence in this crossover's abilities. Our test vehicle was equipped with 4Matic all-wheel drive, and Mercedes is adamant the GLC will maintain the off-road prowess of the GLK, though we didn't venture into the wilderness during our stint behind the wheel. Rear-wheel drive will be fitted to the standard version, starting with an MSRP of $39,875 (up $1,050 from the '15 model). Adding 4Matic is a $2,000 option for 2016. This puts the GLC right in line with the 2016 BMW X3, which starts at $39,595 for a rear-wheel model. The 2016 Audi Q5, which has Quattro AWD standard, begins at $41,825. All prices include shipping fees.

The GLC's fresh appearance has all of the tenets of modern Mercedes design. The company is moving away from the rough-and-ready G-Class to something it calls "sensual purity." In simple terms, that means the GLC looks more like the GLA, and it even has design elements reminiscent of Mercedes sedans. That's in stark contrast to the GLK, which was clearly a grandchild of the Gelandewagen. While the GLK had big wheel arches, chiseled lines, and sharp angles, the GLC features clean body panels punctuated by gentle curves. The GLK was polarizing, but the GLC is generic enough that it could pass for an Audi or a BMW from the side. Up front, it's unmistakably Mercedes, with the three-point star flanked by a shiny double-winged grille, piecing headlights, and a shapely fascia. Though we think the GLC is a tad bland, it's undeniably an elegant SUV. 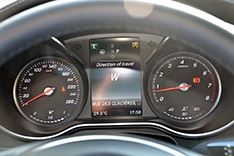 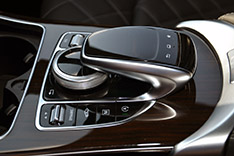 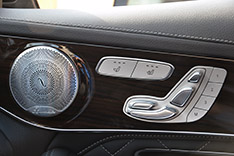 Along with the new design direction, the GLK successor is a bigger vehicle, and we like that. The GLC has a 4.6-inch longer wheelbase, an overall length increased to 183.3 inches, and is two inches wider at 74.4 inches. The expanded footprint means there's more room inside for people and stuff: cargo volume grows 1.8 cubic feet to 56.5 cu ft, according to Mercedes projections (SAE figures were not available). We took up most of the space below the rear window line with our luggage, carry-on bags, and other trappings. Like the GLK, the GLC has enough room for a small family, empty nesters, and others who travel lightly. Anyone one else will need to move up to at least the GLE.

Despite the increase in size, the GLC is 176 pounds lighter than the GLK. The body, which is made of aluminum and high strength steel, shaves off 110 pounds. Mercedes also uses aluminum for the hood, roof paneling, front wing, crash boxes, and shock absorber strut consoles. A new compact transfer case and lighter magnesium transmission housing also contribute to the weight loss. 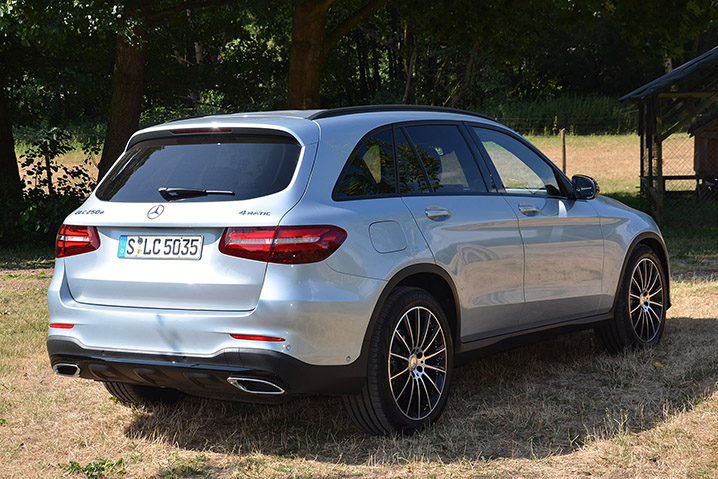 So the GLC is larger, lighter, and looks different brand new. Though it is an agent of change for Mercedes, the GLC itself will continue to evolve. Mercedes plans to add a diesel variant, the GLC300d, in late 2016. It will be followed by the GLC350e plugin-hybrid sometime in 2017. We briefly drove them both, and each is an intriguing performance and efficiency option if you're willing to wait. A GLC coupe also looms on the horizon, taking aim at the BMW X4, at least a year away. In the immediate future, bread-and-butter turbo four-cylinder is on deck for the GLC and its November arrival in US dealers.

While the GLK stuck out on showroom floors, the GLC will look right at home next to other Benzes. With a turbocharged engine, curvy styling, and a modern interior, it follows Mercedes' contemporary playbook to perfection. We'll admit, we liked GLK's sharp appearance and potent V6 and approached the GLC with skepticism. But after a couple of days driving the SUV, we must concede: Mercedes' new formula works. Hey, GLC even rolls off the tongue better.