Based on what we learned from the first day of practice for the 2015 Pikes Peak International Hill Climb, the quickest race pace up the paved road to more than 14,000 feet above sea level may not be from internal combustion locomotion anymore.

"If it all goes well, and the planets align, [under nine minutes] shouldn't be out of the question," said Paul Wilding, team manager for Nobuhiro "Monster" Tajima's Rimac Automobili Monster Sport E-Runner entry. Wilding added that if Tajima's car held up during the week it could finish first overall, which would be the first time an EV takes the overall crown at the hill climb. Last year, the gap between overall winner Romain Dumas' Norma M20 RD Limited and the fastest EV was just over two seconds. In the 2014 race, Tajima finished third in his class. "We think this car is the fastest way up now," said Wilding. "There's no affect from the altitude – this car is a monster, our driver is a monster."

The practice, which isn't mandatory but is sanctioned by race officials, concluded Tuesday morning with a few surprises ahead of Sunday's race. Tajima will be racing for the fourth consecutive year in the all-electric modified division. Wilding said today's conditions weren't ideal and the race Sunday could be more challenging than initially expected. "It was a lot bumpier than we expected today," he said. "But today means nothing. It was all [reconnaissance]. Tomorrow means everything."

The Honda ARX-04B LMP2 prototype brought to Pikes Peak had a difficult start to the week. Honda Racing spokesman Eric Mauck said the car struggled and didn't run in practice Tuesday. "We're looking for data and research more than anything else," Mauck said. "We're not going for Sebestain's record this year, we're just looking to gather information for years to come." Colorado-native, Honda driver, and Formula E racer Justin Wilson will pilot the LMP2 up the mountain Wednesday – assuming the car is ready. "He's obviously a guy that Honda thinks very highly of. Anytime we have an opportunity to put Justin behind the wheel of anything we want to," Mauck said. 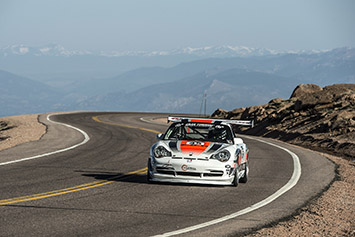 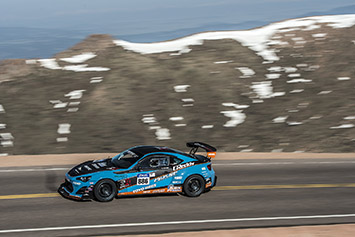 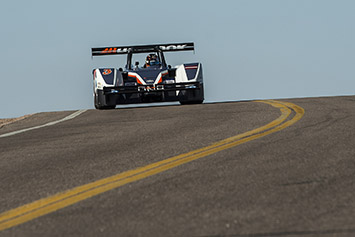 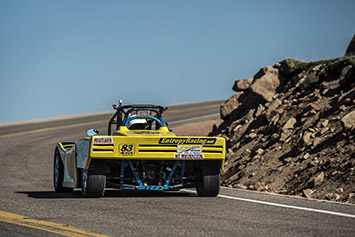 Honda driver Tetsuya Yamano, who is driving an all-electric Honda CR-Z in the exhibition class, echoed Mauck's assessment. "We're not making a racecar," Yamano said through an interpreter. "This is part of [research and development] and we're looking to get as much data back to engineers in Japan as possible ... what we're doing is very advanced." Yamano said dusty conditions hampered practice Tuesday, but overall feedback from the car was good.

Tuesday's practice divided the 12.42-mile run into three segments. The motorcycle classes ran the bottom third; smaller cars, vintage, and open-wheel classes ran the middle section; and the trophy car categories (Unlimited, Time Attack # 1, and Electric Modified) ran the top section, which was still scattered with snow. All 19 of the vehicle categories will rotate through the mountain's sections before Saturday, with qualifying runs held each day. The faster cars will qualify Wednesday morning.

Two out of the top three winners last year were electric vehicles, but with none of last year's top-three finishers returning to the race, this year's podium will be all fresh faces. Dumas skipped the hill climb after co-piloting a factory Porsche 919 Hybrid to fifth place at the 24 Hours of LeMans only nine days ago. Current Pike's Peak record holder Sebestain Loeb didn't make the trip either.