The Best Corvette Yet, And Chevy's Practically Giving It Away View All Specs
" Corvette" has stood for American muscle, American sports car, and American supercar. In many cases, it still stands for America: liberty on the go, LS-powered freedom.

There was also a time when it meant really impressive numbers that didn't equate to really impressive handling, and a not-so-nice cabin. The handling issue really turned the road-legal corner when the C5 Z06 was introduced in 2001, and by the time the super-duper ZR1 ended its run in 2010, Corvette had exorcised practically all of its dynamic demons.

But when I took a seat in the 2015 Corvette Z06 on the first day of my week-long loan, I espied a few demons still squatting in the interior. When colleague Seyth Miersma drove the Z06, he wrote, "Listen, I'm not going to be the guy that dogs the Corvette for having a cheap-feeling interior, this generation has put those once-legitimate claims to rest." Well, I am going to be that guy, because I don't think those claims have been put to rest. 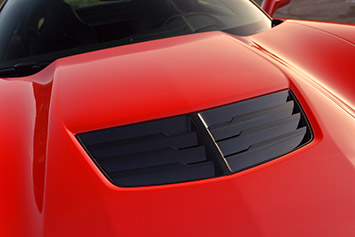 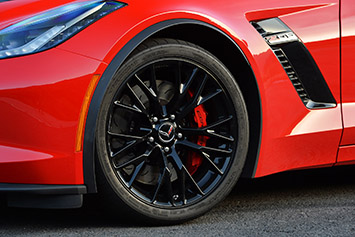 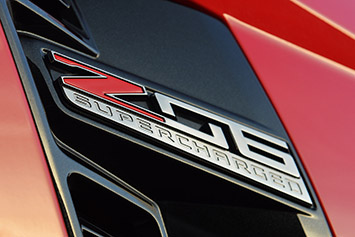 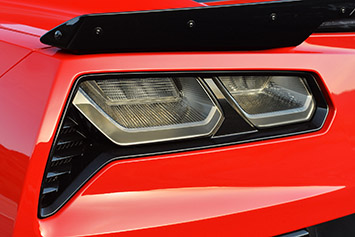 One day Chevy will give us leather that looks and feels like leather, instead of the astonishingly thin hide that is laid directly on top of the instrument panel structure. This material was set off by white stitching, but there were no seams, just a trail of white stitches. In some places it was hard to tell where the leather ended and the plastic began; or it might all have been the same upholstery, I don't know. Five dollars of foam padding would add five thousand dollars of luxury to the cockpit.

One day Corvette will have plastics that don't look so plasticky. I know General Motors can do it. And after years of thinking Corvette seats were too wide and flat, this latest Z06 is almost there. The seatbacks were nice, but the exaggerated side bolstering on the seat bottoms was too narrow and sharp. That's a personal preference, though; other drivers with thinner thighs will think differently.

My complaint isn't that the interior isn't luxurious, it's that it's not luxurious enough. If Chevrolet was worried about pricing, it could add some kind of profligate package to the options list. Have some ex-Porsche people design it, call it the Teutonic Splendor Package, slap a massive price on it, and count the money. People will buy it, and no one will ever have to say again, "But the interior..." 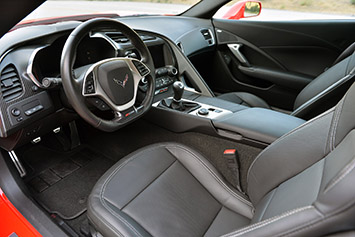 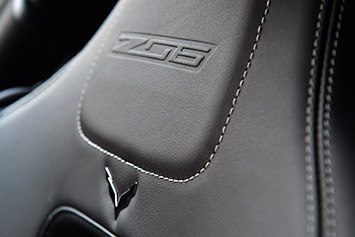 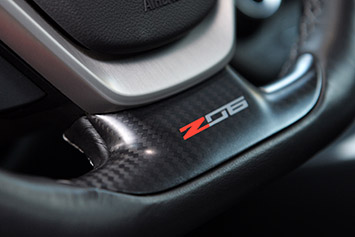 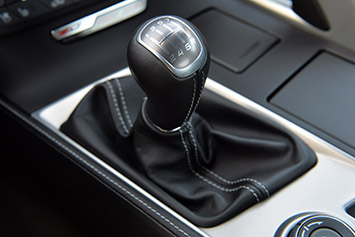 That said, this test car's cabin had every feature I wanted. The gauge cluster was bright, crisp, and readable in every shade of daylight. It was tough to access some of the features in the eight-inch touchscreen, but that's because there's so much content housed within. Visibility was excellent everywhere except the rear three-quarter view, but a very good backup camera and blind spot detection filled in the blanks after personal caution and using my eyes. I could even see plenty out of the smallish backlight and over the Very Serious Spoiler. It was roomy inside. Trunk space was plentiful. The car had a WiFi hotspot. The cabin was a very nice place to do business, despite my desire for more luxury.

The car's body is also tops. I found it looked best from 20 feet away, when the eye is primarily taken with how it surges up from nose to tail, angry purpose in front, enforcing muscle in the back. Get right up on it and you notice how busy the bodywork is, with its lines, creases, and contrasting bits. I like the winglet covers over the vents in the rear fenders, but I wish Chevy offered an option for body-colored vents and rear spoiler – its overall shape doesn't need help, but especially in back it could benefit from fewer things-and-stuff. 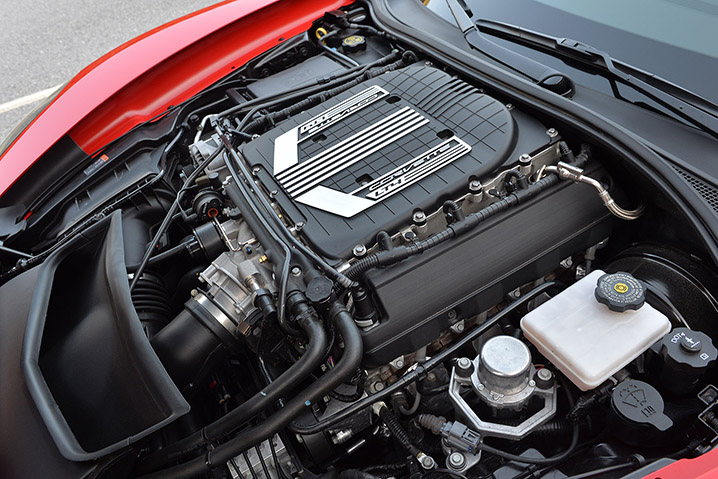 As you know, the real business is under the hood. The 6.2-liter LT4 V8 deserves a Best Actor nomination, its 1.7-liter Eaton supercharger should win Best Supporting. It's never been so easy to pilot a square 650 horsepower and 650 pound-feet of torque, nor so enjoyable to do for hours on end. There are five drive modes – Eco, Tour, Sport, Track, and Weather – but I only used Tour and Sport regularly. The car felt restrained in Eco but didn't strangle itself. That was a pleasant surprise, but hey, there's a lot of leeway when you're starting with the power of almost two Porsche 911s put together.

The only reason I'd switch to Sport around town was that throttle tip-in was so relaxed in Tour that I stalled the car on a few occasions when pulling away from a stoplight. On the subject of that seven-speed manual transmission, one of the dash displays shows what gear you're in, which comes in handy; the gearbox spacing is so tight that sometimes I wouldn't realize I was in the wrong gear until I looked at the display. The magnetic suspension setting in Tour was awesome at swallowing up LA's chock-full-of-nuts road surfaces, bestowing poise for all-day driving comfort. In Sport the controls are sharper without being twitchy, but the suspension really firms up – it is impossible to confuse it for Tour unless you're on a polished road, and that's before you get to the suddenly rumbly exhaust note through the four, three-inch pipes. 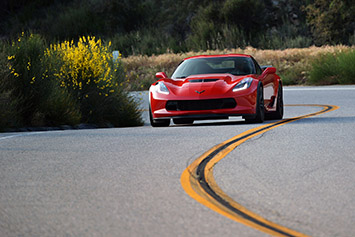 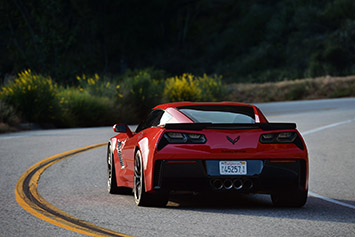 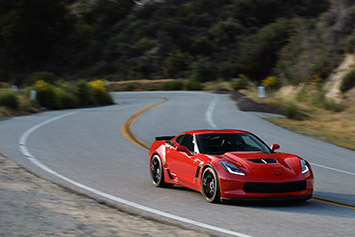 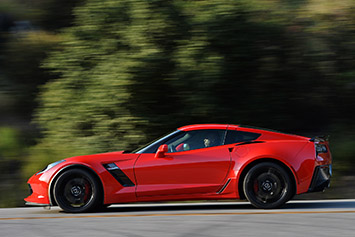 Find a curvy road where you can use Sport for its intended purpose, throw it in second or third gear depending on how high up in the rev range you want to be (and how many feral creatures you want to frighten to death), and every second is a thrill. Turn-in is immediate, the suspension is excellent at soaking up blemishes while keeping the tires placed to use their grip, the Brembo brakes just won't quit, and the thing just pours out 55-gallon drums of power on demand. The Z06 only shows its size during really tight maneuvers. Give it just a tiny bit of room to breathe, though, and it'll run with anything larger than a Lotus. And the sound it makes, that unique timbre of power and displacement and snarling and thunder and freedom, is the mating call of an entire nation.

This car was a blast to drive fast, it was blast to drive slow. One of the best things I can say is that I felt guilty not driving it every moment it was here. If I was too busy to drive it, I drove it anyway. If I had already driven it and had nothing to do, I drove it again. If I could have cleared out my whole week and just driven this car, I would have done that. 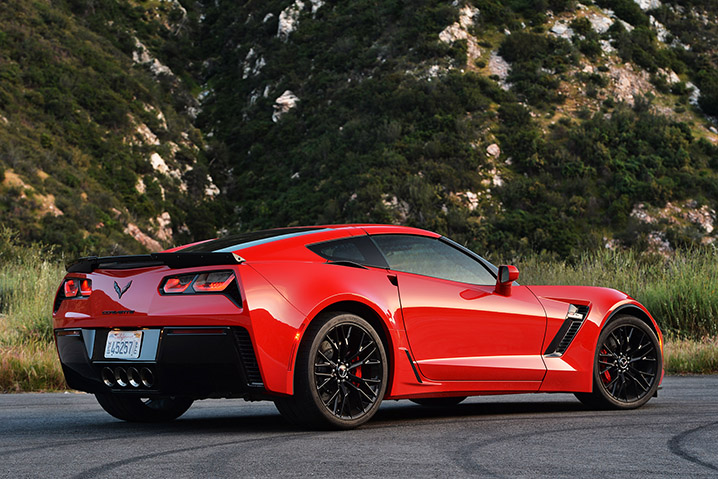 I griped about the cabin, but the Z06 starts at $78,000. The one I drove had a few luxury options like ventilated seats and carbon fiber trim, but not the Z07 Performance Package, and it was $85,565 out the door. I can't say this loudly enough: for that price, Chevy is giving this car away.

You need to spend at least $13,700 to find another car that can touch its performance, or $52,000 for a car that does as well and is as fun to drive. Yet in both cases, you lose out on key parts of the Corvette Z06's package. I'll say it one more time for emphasis: at under $ 86 grand, Chevy is giving this car away. The 2015 Corvette Z06 isn't just "great for the price." It's just plain great. Period.