Seyth Miersma
View All Specs
Daily Driver videos are micro-reviews of vehicles in the Autoblog press fleet, featuring impressions from the staffers that drive them every day. Today's Daily Driver features the 2015 Audi S7, reviewed by Seyth Miersma.

[00:00:00] Hi, all. This is Seyth with Autoblog. I'm here driving the 2015 Audi S7. I'm caught in a kind of annoying, normal, end-of-the-work-day suburban traffic right now, but even that helps to illustrate the point that I'm trying to make about the S7, is that it really is one of the best all-around grand touring cars that you can buy. A really, really good grand tourer has to do three things.

[00:00:30] One, it has to look amazing. It has to feel really special inside and out. The second part is that it's got to be a great long-range cruiser. It needs to be powerful on the highway, be able to be very comfortable and quiet if you're taking it long distances, kind of like your typically Autobahn car. Three, and I think this is really difficult with the second one that I mentioned, I think that grand tourers have to be really great at driving like sports cars.

[00:01:00] You're going along and you're touring on the highway and you know that a really great road is coming up. The car should be able to get off on that road and handle like something much lighter and still have that great cruising character. That's one of the reasons why I've always liked the entire Audi A7 line, but especially this S7 because the A7 itself in all of its guises is really a pretty great cruiser and a really practical all-around car with the space in the hatch

[00:01:30] and reasonable room in the back seats. The S7 with the turbocharged 4.0-liter V8 making 420 horsepower and 406 pound-feet of torque really amps up the sportiness. Now don't get me wrong, the S7 is far from a sports car. It's not very light. It's got a long wheelbase. It is nimble, especially with Quattro, but it doesn't feel especially nimble. It doesn't want to change directions super quickly. It splits the difference between the two. That being said,

[00:02:00] when you get up to some of your favorite roads, it doesn't disappointment you either because of all the power and grip and some pretty decent sporting character available. Of course one thing that you do lack in a big GT like this S7 vs. an actual sports car is a real sense of lightness and, to my mind, a really great sense of tactility, too. The car puts a focus on comfort and refinement over things like steering feel or seat-of-the-pants feel,

[00:02:30] so you're not exactly sure what's going on under the tires. It does sound pretty good but you really do have to lay on the throttle to be able to hear it.Really when it's all said and done there aren't a lot of cars that I would like to take on a really long road trip with plenty of time left over for side trips than this S7. Thanks for taking the time to watch, you guys. Be sure to look for more Daily Driver videos from me and the rest of the Autoblog crew. [00:02:59] 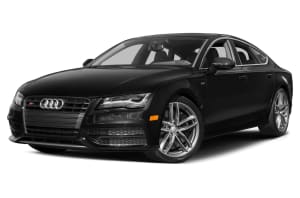