A Standout Thrill In A Wholly Wonderful Model Range The merchant marine captain hankering for the ancient days of watercraft can't simply book an afternoon in a fifth-century BC Greek trireme. The enthusiast aviator keen on the early days of flight will have a hard time sourcing a Sopwith Camel biplane or Caudron C.450 pre-war air racer. And good luck resto-modding your 19th century steam locomotive with a diesel engine and the latest electronics.

Auto enthusiasts, though, are never far from the dawn of the automobile. In warm weather months it's not outrageous to spot a 100-year-old Oldsmobile headed to some car show. The following decades are well represented by roaring weekends of vintage racing. A Shelby Cobra body hiding a modern engine is prosaic. Unlike those other modes of transport, it is easy for us to caress our history and live with it daily.

And that's what the Caterham Seven is: a thrilling piece of history you can use every day. Superformance is now the US importer for the English brand that carries on Colin Chapman's philosophy of "Simplify, then add lightness," and the 58-year-old model is an archetypal example of both the good old days and how lightness can revolutionize the driving experience. We recently visited the company's warehouse to drive the 360, 480, and 620 R models, and it was six hours that we will never forget. In the Caterham, less isn't more, less is everything. 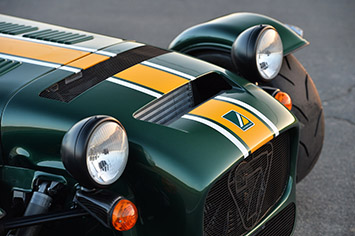 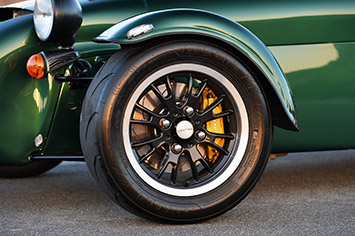 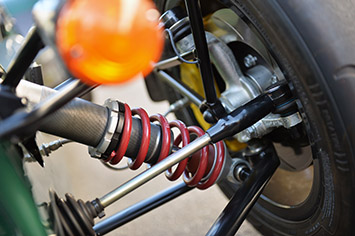 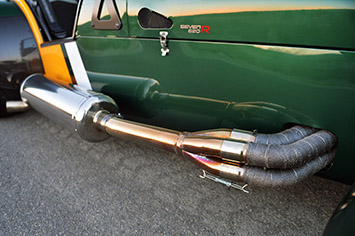 Depending on how you spec and option your Caterham it weighs from 1,200 to 1,350 pounds. Even at its heaviest it's, 1,000 pounds under the weight of the 2016 Mazda MX-5 Miata, and 755 pounds below the first Miata that still sends purists into reveries of gossamer yesteryears. If you want to get a Seven going, you might only need to turn your head toward its rear and sneeze.

Technical marvels are absent here, because the only bits included on the car are those that make it go. No airbags, no electronic aids, no telematics, no radio. You want luxury? You can pay for an armrest. Yes, that's an option, and it comes on a door that is normally an option, but Superformance includes it. Know what else is an option? Paint.

Nor does the Caterham use a big engine. The outputs are hale for the Seven's weight, but even the 1.6-liter and 2.0-liter four-pots slotted into that elongated nose yield a bantam alacrity. The Caterham makes a 427 Shelby Cobra feel like a Dodge Hellcat. The upshot is perhaps the purest driving experience you're ever going to have. 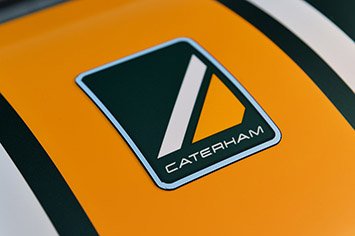 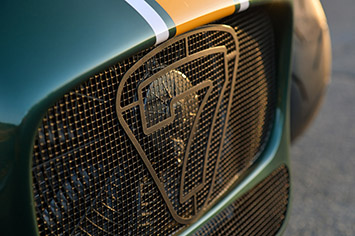 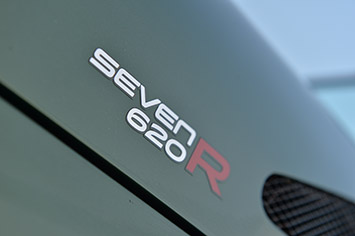 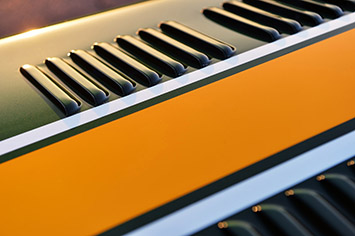 I started with the second rung of the ladder, the Caterham Seven 360. Mine had a 2.0-liter Ford Duratec four-cylinder with 180 horsepower, maybe the best way to make a Seven introduction. With "just" 180 hp, the Seven is just right, quick off the line and alert on the throttle. Every Caterham gets a Bilstein- and Eibach-sourced independent suspension up front and a de Dion rear end, and here the package is perfectly balanced, with uncanny composure on everything but really bumpy roads where the light, stiff chassis will jiggle and buck like a bowlful of jelly.

Steering doesn't get more direct than when you can see the front wheels and the corner apex just ahead of your feet, and there's less than two turns to lock from a Momo steering wheel so small I laughed at it. I recommend ordering the $345 quick release option unless you want to Cirque-du-Soleil your way into and out of the car. And as for the gearbox, you could tug on the 360's easy five-speed manual all the way cross-country without a worry, assuming you know how to live out of small bags laid up in the Coleman-cooler trunk and the passenger compartment.

Next I tried the 480, a looker with its painted black fiberglass nosecone, wheel wings, and unpainted aluminum body – but it's a rowdy middle child. Here, the 2.0-liter Duratec defaults to 210 hp, but a Sport button on the console inflates that to 240 hp. It feels like hitting the 'Turbo!' button in a video game and comes with extra rough-edged aural accompaniment from the side-mounted exhaust, plus some snap-crackle-pop on overrun and downshifts. But the ride wasn't as smooth as in the 360, nor its six-speed manual gearbox, and unwelcome heat seeps into the footwell and the tunnel. 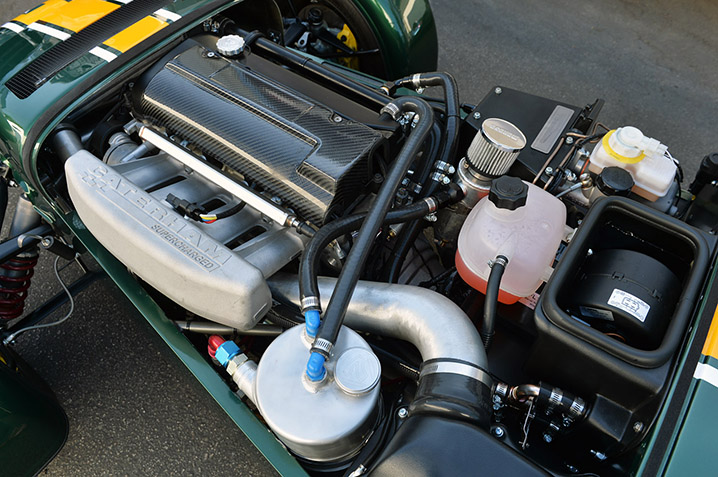 Then came the 620 R, which gets a supercharger laid onto that 2.0-liter Duratec for 310 hp and 219 pound-feet of torque. The nose gets serrated fins in its opening and an extra intake for cooling, the front suspension gets a wider track, performance tuning, adjustable dampers, and aero-shaped control arms. In the carbon-fiber-trimmed cabin there's a six-speed sequential transmission that needs orders, not requests, geared so it can reach beyond 60 miles per hour in first gear – a sprint said to take 2.8 seconds, and there's an upgraded brake master cylinder erasing velocity more quickly. There's another one of those tiny steering wheels in the cockpit, and no electronics anywhere. Its owner's manual should be called, "How to Train Your Dragon."

Every time someone asks me about driving it, I get quiet and reflective and have to beg a few minutes to let my loins settle, like when a TV interview reaches a crucial moment and the interviewee says, "Um... could you just... give me a moment." 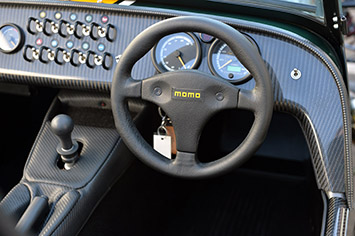 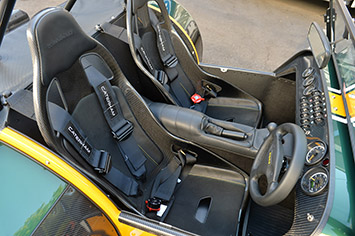 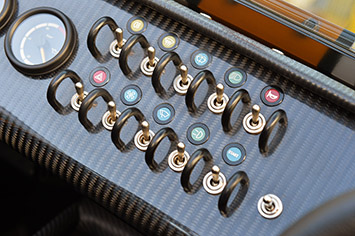 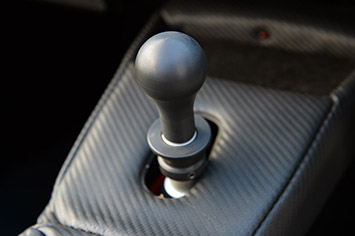 Every aspect of the 620 R will have some visceral effect on you. It isn't made in the wider SV chassis, which provides four extra inches across the beam, so my Midwestern "carriage" didn't fit in the seat. In fact, I wasn't going to drive it until photographer Drew Phillips said, "I want to shoot this one. Come on, you can do it." It took a giant shoehorn and six sticks of butter to make it work. Then I discovered that one of my shoed feet touched all three pedals. The accelerator is a Tic-Tac, the brake pedal is a Post-It, the clutch is a half a piece of Twix. So I uncorked myself, took off my shoes, grabbed the shoehorn and butter, slid back in and buckled up the four-point harness. It was so tight below the waist I couldn't have passed gas. The lightly padded carbon seats have almost no bolstering because there's nowhere to move – the transmission tunnel and body sill hold you in place. With much focus I could get just one foot on just one pedal.

And it was it so worth it.

It takes a few launches to get conversant with the clutch, but when you lay on the power the experience melts the chains of reality and conscious sense like making the jump to hyperspace, on acid. Three-hundred-and-ten horsepower in a 1,200-pound car is psychotic and hallucinogenic, a better power-to-weight ratio than the Bugatti Veyron or the McLaren F1. You make quantum leaps forward and a little sideways, waking up to yourself in a different part of the road with vague recollections that sound like voiceover from a Terrence Malik film: "I think I was stopped at a light a minute ago... or maybe it was a year ago... what am I doing here?... But look at all the stars..." 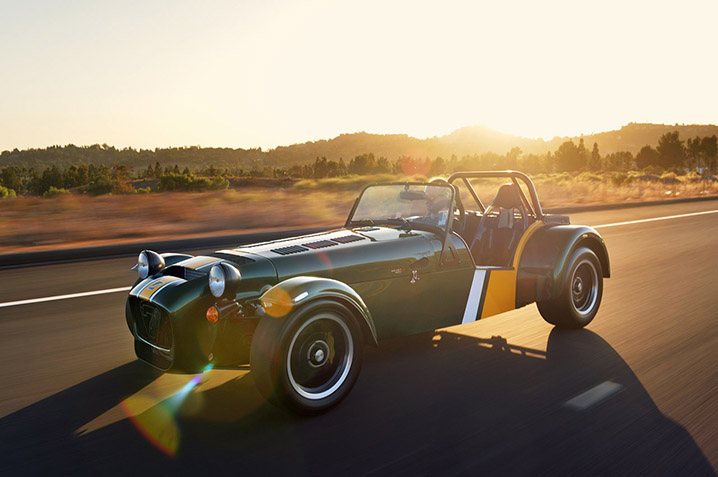 As outstanding as that is, it's the noise that makes this an experience like no other, a mechanico-pneumatic tidal wave of reverberations that I liken to sitting inside a supercharged jackhammer being wielded by an lunatic banshee. The engine wails above 3,000 rpm through the section of Cessna fuselage masquerading as a muffler a couple of feet from your ear, the sequential gearbox with its straight-cut gears can be shifted flat-out and thunks! like a ram slamming into the anvil on a pile driver every time you yank the black stub of a lever. Getting power to the wheels through the limited-slip differential sends clicks through the driveline and clacks through your auditory canals and it's way too loud to think.

But there's no need to, so you submit your senses to The God of Din, waiting for that certain engine pitch or checking the gearchange lights before yanking hard again on the shifter, the chassis devoid of roll but its 13-inch wheels on semi-slick Avon ZZR tires squirming in eight directions under the thrust. Every bolt and rod and bushing telegraphs a message to a steering wheel so small your thumbs almost touch; your hands and feet and seat transcribing the tidings and making replies before any conscious thought. Which is convenient, because you can't think. You just go and go and go, looking for every chance to wind it up because there's nothing like it. The Ariel Atom is the only thing close, except it's even less practical.

Oh, and while the 620 R won't blow its top in stop-and-go traffic, the footwell and tunnel will roast your extremities for supper. So wear shorts. 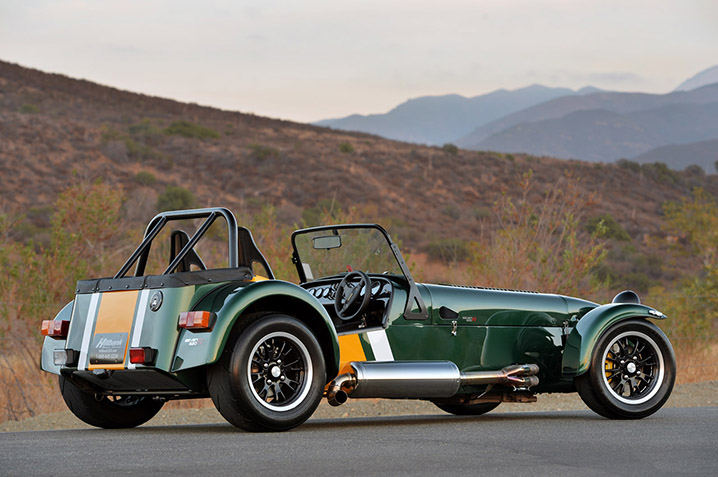 The 620 R starts at $72,900 for a rolling chassis. Although the car is ordered from Superformance, the nearby V's Performance installs the engine and transmission at extra cost. For the car I drove, the supercharged 2.0-liter engine cost $16,000, and installation added another $3,500. The transmission price was included, but with options like the $5,395 Caterham (ex-)Formula One paint job you're looking at $101,815 for the thrill.

True, this isn't exactly inexpensive for a wallop of pleasure that is as rewarding as a black market stimulant but only just as practical day-to-day. Yet I can't recommend it enough.