Take A Walk On The Mild Side View All Specs
Luxury off-roaders take many forms these days, but not many of them are true wagons. And of those that do exist, a good many of them are Volvos. Volvo credits itself with starting the luxury off-road wagon segment in 1997 with the V70-based XC70. And it's had the segment pretty much to itself ever since, with the exception of the occasional Audi Allroad or Subaru Outback. Now Volvo is doubling down in this nichy-est of niches by adding the V60 Cross Country to its lineup for 2015.5.

Like the XC70 (which isn't going away), the V60 Cross Country is for people who want a comfortable car they can take off road, maybe. These are city slickers by and large, who perhaps once or twice per annum find themselves driving down a lumpy dirt driveway or muddy path en route to a campsite. Do they need locking differentials or a winch? No. Will they ever use up all 7.9 inches of the V60 Cross Country's ground clearance? Probably not. But just in case, these folks are glad they have it. And the rest of the time, they're glad they are not in an SUV. 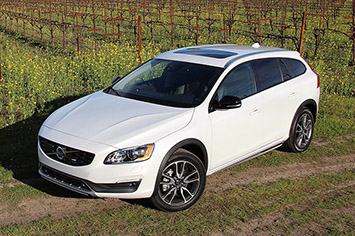 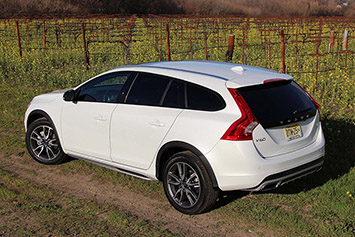 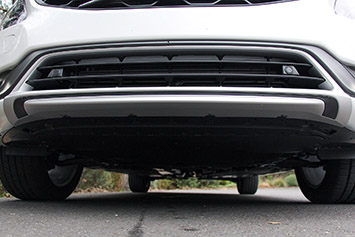 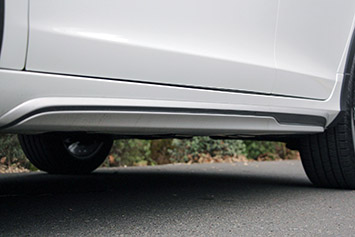 Putting ourselves in their shoes for much of our first drive of the V60 Cross Country, which took us from Calistoga to Lake Tahoe, CA, we came away quite satisfied. We scouted for photo spots on either side of the area's legendarily beautiful roads as if we were the car's imaginary target-market owner, looking for antique stores or strawberry stands. We saw little terrain we felt the car couldn't handle. When we veered off the pavement and perched it by a vineyard or a rock face, we were pleased with the V60's solid structure and well-tuned shocks' ability to mute off-road impacts. Nary a squeak or rattle emanated from the roof, dashboard, or pillars as we crossed shallow ditches and climbed over small obstacles. The suspension's generous wheel travel kept the car's tires in contact with the ground while its Haldex all-wheel-drive system kept them moving, sending up to 50 percent of the engine's torque to the rear wheels if the fronts slipped even 1/17th of a rotation.

But we made no attempt at any wheels-off-the-ground stunts, nor did we point the car toward any piles of craggy boulders, felled trees more than six inches in diameter, or open river crossings. That's not the point of this car, and remember, we were behaving like the customers for whom the V60 Cross Country is intended. These folks are more mild than wild. Hence, the day became a bit of an adventure for which the car seemed perfectly suited. And should we have found an antique shop or stopped at a winery, we could have loaded up the day's acquisitions in the back. Not a bad way to live, really. 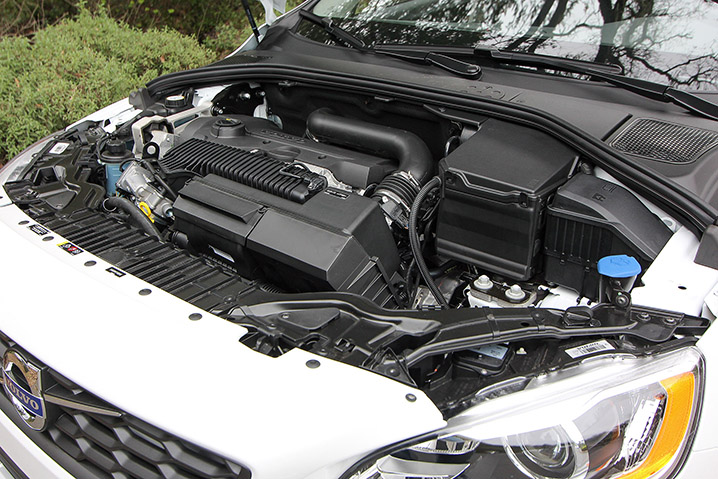 Putting our driving gloves on, however, we found the V60 Cross Country to be a slouch on the road. Volvo claims its venerable turbocharged five-cylinder – with 250 horsepower and 266 pound-feet of torque – can hustle the high-riding V60 to 60 miles per hour in seven seconds flat. But turbo lag makes it feel more sluggish than that – a feeling that's noticeable while passing at speed. A lack of paddle shifters means you have to reach down to the gear lever to shift, which is annoying. At least the Cross Country deserves some credit for including both sport and manual shifting modes in its six-speed automatic gearbox. The car would drive better with crisper steering and brakes, but we enjoyed the creamy ride and quiet cabin, even at high speeds climbing towards triple digits. The flipside to its incredible ride comfort is pronounced body roll, as well as acceleration squat and brake dive. It doesn't exactly roll over and play dead when it counts, which we verified on a few closed-course "moose test" maneuvers. But suffice it to say, the V60 Cross Country is happiest at a leisurely pace.

So the V60 Cross Country isn't about Driving with a capital D. Playing into the car's soft-roading narrative is its appearance, which doesn't pretend to be something it's not. It emphasizes style over contrived ruggedness. Compared to the slightly larger, considerably more practical XC70, the V60 Cross Country is decidedly closer to the wagon on which it's based, with the only mods being blackout windows and mirror trim, privacy glass, perfunctory scuff plates (none of which appear to protect much of anything), and an egg-crate grille. All will come with the same set of 18-inch wheels seen here, wrapped in 235/50 Continental all-season tires, while fenders are lined with a thin strip of black trim to fill the gap created by the lifted suspension. What's missing are obnoxious roof racks, fattened bumpers, or any form of body cladding. Volvo designers deserve big kudos not just for what they did to the car, but for what they didn't. The result is a truly good-looking tall wagon that seems very comfortable in its skin. 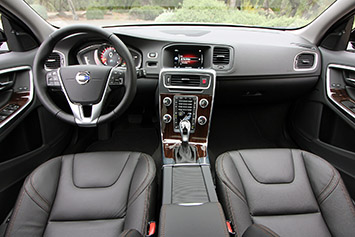 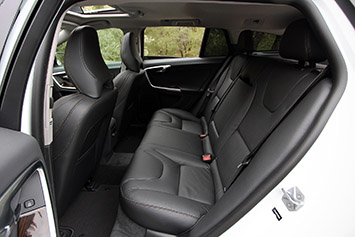 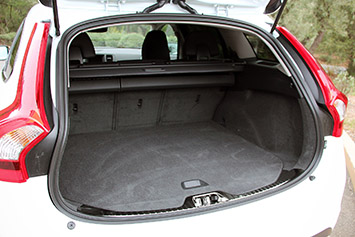 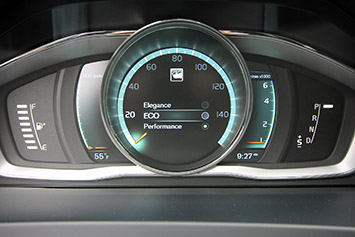 Even less was changed inside, where occupants face the same pretty, if ergonomically eccentric dashboard as other S60/V60 variants. Our testers were classed up with the $400 wood inlays, yet whiffs of the design's advanced age (it's based on the four-year-old S60) are detectable in the smallness of the seven-inch infotainment screen and fussy user interface. The fresh instrument cluster, however, presents information along "Eco," "Elegance" or "Sport" themes, the latter being our favorite, not surprisingly, with its red color scheme and prominent digital speed display.

And then there are the V60 Cross Country's standard front seats, known in Volvo-land as Contoured Sport Seats and which indeed deserve their own paragraph. Volvo's proficiency in seat design is well known among car people, but these chairs take backside-coddling to another level. The rear seats are excellent, too, if a little short on legroom, but for trips short or long, we personally cannot think of any front seats more comfortable than these, even in cars costing five times as much. They're that good. Seriously. 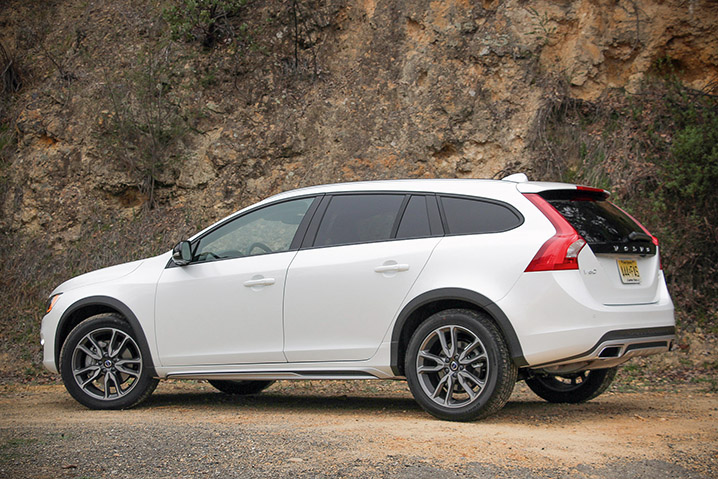 The V60 Cross Country Premium model's $41,940 base price includes a decent load of goodies, such as power folding mirrors, rear park assist, navigation, leather upholstery, a sunroof, and connectivity, including Wi-Fi hotspot connectivity. Our utterly loaded tester came in at $45,590 in Platinum trim, the price swelling to $49,350 once the $925 blind spot and cross path monitors, $1,550 Climate package, $325 speed-sensitive steering, $400 wood inlays and $560 metallic paint jobs were added in. If that seems like a lot of coin, it's worth noting that the Audi A4 Allroad starts at $43,325 and rises to well over $50K for the Prestige model.

Clearly, just because other manufacturers haven't lined up behind Volvo with butched-up, all-wheel-driven wagons of their own doesn't mean that the niche is without merits. And Volvo is about to see if it can expand that appeal to a more stylish set with the V60 Cross Country. 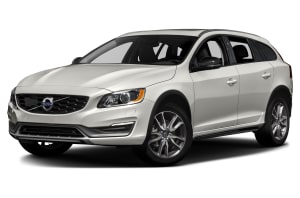