When the silk finally slipped off Hyundai's HCD-15 Santa Cruz concept at the Detroit Auto Show on Monday, it was tangible, four-wheeled confirmation following years of rumors that the Korean automaker has been investigating the pickup market. Yet despite strong early critical and online reception, the likelihood of a production Hyundai pickup remains muddy at best.

To be clear, Hyundai officials tell Autoblog there's nothing remotely production-ready lurking below the Santa Cruz's skin – it's a what-if concept designed to gauge customer reaction. But company officials say Hyundai is seriously investigating the possibility of a production pickup, and the company firmly believes that there's a market for a small, efficient unibody truck.

According to John Krsteski, Manager at Hyundai Design North America, who spearheaded the project, Hyundai "is spending a lot of time right now still going through some studies on which types of platforms – whether it's a unique platform. It could be based on something like a Tucson ... we've looked at several different options." While Krsteski indicated that a platform hadn't been arrived at – and would likely need modifications – he says "it's definitely feasible." 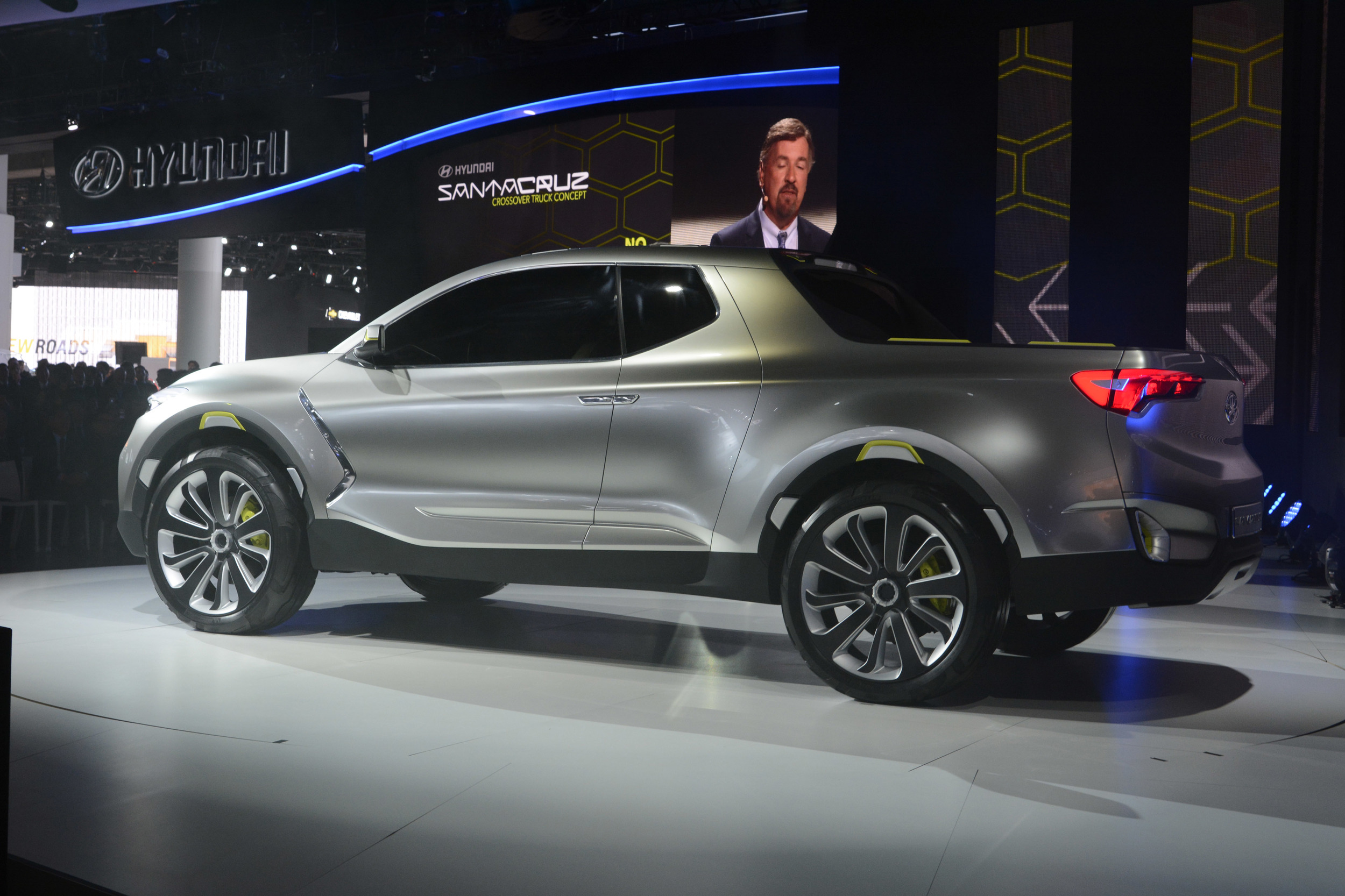 The Santa Cruz concept has a number of eye-catching features that would seem tough to produce – namely the slide-out rear bed extender that Krsteski says was influenced by the drawer-style ovens and dishwashers increasingly found in high-end kitchens. "We've had a couple of engineers in the studio and we did some study models on it, and we do think it's feasible – especially based on how we could package that inside there." With the extension in place, the small bed is large enough for a motocross bike to fit in on an angle.

So what's next for the Santa Cruz? Hyundai has some internal studies it has completed and others that remain ongoing, and the company will work to gauge consumer response to the vehicle at auto shows and other events. Hyundai Motor America is clearly excited about the California-born project, but the toughest hurdle to a production pickup will likely be getting approval from headquarters in Korea. To that end, we've been led to understand that it was both telling and strategic that the Hyundai press conference was packed with Korean executives, who were on-hand in part to gauge media reaction to the Santa Cruz.

Hyundai sees potential for small truck buyers among millennials, despite its own research admitting that market "is almost non-existent," with those under age 30 accounting for only seven percent of pickup purchases. It also notes, "Women, who buy more than half of all CUVs sold, now account for only 10 percent of pickup sales."

In the end, the fate of a Hyundai pickup likely lies with whether Korean executives view the above metrics as an opportunity, or as a liability.