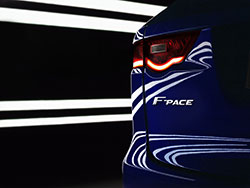 Remember when the Apple iPad came out, and even reclusive Myanmar tribes were signing up for the Internet just so they could comment, "What kind of @#$%^ name is that?" But now, no one thinks "iPad" is unusual. Well, maybe the name of the new Jaguar crossover, F-Pace, will be like that. Maybe. We're told it was christened after worshipping at the altars of the F-Type and the company tagline, "Grace, Pace and Space" coined by founding father Sir William Lyons.

The rest of it shouldn't give pause, though. Called a "performance crossover," the production version of the CX-17 concept will have five seats and be built on the firm's new aluminum-intensive platform. It's promised to have an "advanced suspension system" that incorporates both Jaguar's Instinctive All Wheel Drive and All Surface Progress Control tech, the latter being a low-speed cruise control for handling slippery surfaces, touted on the coming XE R-Sport model.

Unfortunately, we've been told the production F-Pace won't actually get a Detroit Auto Show reveal, despite the video leading us to believe that will be the case. However, the CUV is well into development testing and will hit showrooms next year. So get ready. For the F-Pace. There's video above, you can click on the inset image to begin acquainting yourself with that name, and a press release below has a few more particulars.

- Jaguar announces F-PACE – the production version of the breakthrough C-X17 concept car
- A highly-efficient five-seat performance crossover underpinned by Jaguar's innovative aluminium-intensive architecture and advanced suspension system
- All-weather and dynamic driving traction to be aided by the Instinctive All Wheel Drive® system and Jaguar's All Surface Progress Control technology*
- The Jaguar F-PACE will deliver an unrivalled blend of style, performance and practicality

Ian Callum, Director of Design, Jaguar, commented, "We received such an overwhelmingly positive response to the C-X17 concept car last year that we just had to make it a reality.

"The Jaguar F-PACE, inspired by the F-TYPE, represents a perfectly judged balance of style, performance and practicality. It offers a unique combination of Jaguar sports car inspired exterior design, fused beautifully with a thoroughly practical and spacious luxury interior. The F-PACE is our family sports car."

Speaking in Detroit, Andy Goss, Jaguar Land Rover Global Sales Director said, "In 2015 we will celebrate the 80th year of Jaguar. We have started it by announcing our first performance crossover which we consider to be the ultimate practical sports car - a car that builds on the brand's founding ideals of Grace, Pace and Space to become one of the most innovative Jaguar vehicles we've ever developed. The F-PACE has now begun its engineering and development testing program ahead of the new model going on sale in 2016."

F-PACE continues the new model roll-out for Jaguar, ensuring 2015 will most definitely be the year of the cat."

Designed and engineered in the UK, the F-PACE has now begun its rigorous real-world testing at Jaguar Land Rover's extensive global test facilities. The F-PACE will be manufactured in Solihull, UK.