EV Buses Could Offer Power In Crisis, Dollars In Down Time

Pete Bigelow
For the better part of seven decades, the ordinary American school bus has remained exactly the same. Someday soon, it could undergo a radical change.

Next year, three California school districts will soon participate in a experiment that will examine whether school buses can be used beyond their traditional scope of transporting children to and from classrooms.


"At the end of the day, this could be about who owns the battery." – Jean-Francois Tremblay.

A group of companies operating under a Clinton Global Initiative grant envision a zero-emissions future for school buses that's far more versatile. They're working with the schools to retrofit six school buses that double as rolling generators in their spare time.

Once their appointed rounds are complete, these school buses can be used to make additional money for their owners by charging their new electric battery packs at off-peak hours and later selling the electricity back to power companies at higher prices during high-demand times. During power outages or other emergencies, the buses could transform into mobile generators used to power hospitals, command posts or other critical places.

"In case of a disaster, it's not a bus, it's a generator on wheels," said Kevin Matthews, co-director of the project, who works for DC-based consulting firm National Strategies.

The project is a novel rethinking of a piece of vehicular equipment that has essentially stayed the same since first national school-bus standards were adopted in 1939. 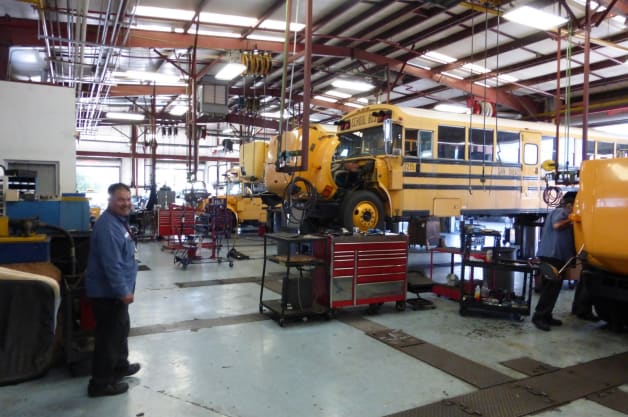 While many automotive and transportation officials were gathered at the Los Angeles Auto Show last week, work began on the first bus a little more than 100 miles to the south in Poway, CA. Five more buses will undergo their transformation in January, and after testing, the six will be disseminated to districts in Torrance, Kings Canyon and Napa Valley. Two more buses may later be added in Massachusetts.

Once they're retrofitted, the six C-Series buses will look the same as they always have: lean and rectangular and sporting "School Bus Yellow," its own official color. But their diesel engines will be gone, replaced by electric batteries tucked in their cavernous underbellies.

Organizers have high hopes for the demonstration project, which will cost between $5 and $7 million to operate and monitor over the next three years. They believe it offers potential solutions on a range of economic, transportation, energy and health problems. In this case, they didn't seek to address sweeping questions and wind up selecting the school bus. They first thought of the bus, and then considered the possibilities.


"In case of a disaster, it's not a bus, it's a generator on wheels." – Kevin Matthews.

"Really, the school bus is the catalyst," Matthews said. "We had everyone coming around to look at problems and address possibilities, and on this, everyone could work on health, economic and transportation issues and see the benefit for a school bus."

If unglamorous, there's no more practical, perfect vehicle. School buses are available; they sit unused for 80 percent of the time in a given month. Their routines are the same; they leave the depot twice daily at the same times. Their routes are predictable – the 100 to 125 kwh batteries can provide enough power for an 80-mile round trip on a single charge – so range anxiety is diminished. They park at the same place each night, making charging equipment available and easy to install.

Unlike a lot of demonstration projects involving green-car technology, this one isn't necessarily designed to investigate the technology. The partners are convinced the technology already works. They're interested in seeing whether it can be profitable. 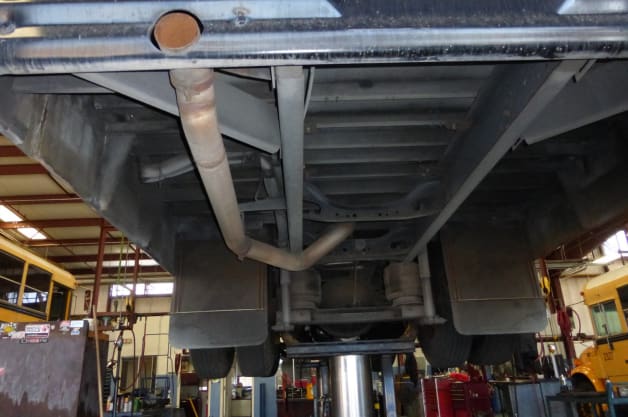 There's complexity in answering that question. In a scenario where this vehicle-to-grid technology is financially rewarding, the electric vehicles will store energy in their batteries during off-peak hours, then sell it back to energy providers at a higher price when overall demand on power grids is higher. By timing the market this way, project partners believe each bus could generate $5,000 to $20,000 in revenue.

While there are not yet plans to broaden implementation beyond California and Massachusetts, some arm-chair math shows the potential of V2G school buses. Eighty-five percent of the nation's 473,000 school buses run on diesel fuel. If just a fraction of them, say, 60,000 buses, were generating $20,000 in revenue, this would be a billion-dollar business.

Timing is everything. So is location. Since rates charged by utility companies differ by region, the conclusions drawn from these California markets may not be transferable to, say, Chicago.

"We're going to help validate those business schemes and see how the business community reacts to them," said Jean-Francois Tremblay, global director of the advanced mobility group at Ernst and Young, one of the participating partners. "We'll look and say, here's what it generates on a good week, here's a bad week, and here are the risks we've found."


"We'll look and say, here's what it generates on a good week, here's a bad week, and here are the risks we've found." – Jean-Francois Tremblay.

Once they figure out how much money can be generated selling back electricity, project organizers can then compare that to the current costs of running a fleet. They anticipate electric costs will run $1.10 for the equivalent of a gallon of fuel versus $3.94 for a gallon of diesel. Over the long term, they project the costs associated with EVs will diminish as the technology advances, while the costs of diesel remain constant.

Additional savings could be unearthed in lower maintenance costs. Oil changes will be a thing of the past, and there are fewer lubricants required, less wear on brakes and less downtime due to routine maintenance.

Electricity is obviously a different power source than biodiesel, but if there's a bigger lesson to be learned, it's that innovators cannot wear green-colored glasses. Perhaps the one thing the EV partners in California anticipate is that their projections probably will not play out as they have precisely planned. "We're going to learn a lot of lessons, let's start with that," Matthews said. 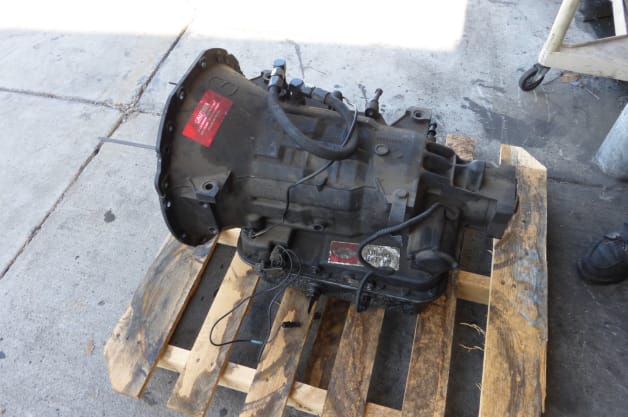 Profits Are Only Part Of Motivation

Even if the operational math proves worthwhile, the upfront expense of retrofitting buses with electric capability could be too prohibitive for the nation's bus manufacturers, who suffered losses during the Great Recession when penny-pinching school districts delayed their fleet-replacement schedules. To that end, a business model that evolves around EV school buses may look a lot like the model where customers sign a years-long agreement with a smartphone provider.

Hypothetically, a provider could retrofit school buses for free for districts or manufacturers. In return, they could keep a percentage of the vehicle-to-grid revenue generated for a certain period of time.

"At the end of the day, this could be about who owns the battery," Tremblay said.

Also at the end of the day, EV school buses could be more about pure profit. Studies have shown that diesel fumes trigger asthma and bronchitis in children, and the American Cancer Society recommends limiting exposure to diesel fumes and time spent in proximity to idling engines. Organizes are hopeful the project will show that EV school buses have the potential to be good for both business and kids.

"As exciting as this may be," Matthews said, "this is still about transporting our most precious resources."