VW Offers Up A Safety-First Facelift

View All Specs
Add a Review
The second-generation Volkswagen Touareg has been in production since 2010, and is therefore staring down the last part of its model cycle. To keep buyers interested, the company has undertaken a refresh of its upscale midsize SUV. As is typical of these things, the changes include some exterior and interior rejuvenation, as well as increased content levels and a slight uptick in price.

The basics of the styling changes are pretty straightforward. The 2015 Touareg can be pretty easily spotted versus the outgoing model by way of its four-bar chrome grille, a cleaner headlight design, bigger VW badge and a completely new lower front clip. (I got one photo of the old and new models side-by-side for my Twitter followers before we rolled out on the drive.) There's also a thin strip of chrome that runs around the bodywork, standard LED taillights and a selection of three new wheel styles and five new paint colors.

Inside, I found it harder to spot the changes, old to new. The Touareg's switchgear has been updated and there's a new frame for the infotainment display, but there's no piece that stands out and says "new model year!"

Powertrains and mechanical bits all carryover from the 2014 Touareg, too. But there were a few functional changes to the vehicle, primarily in the new Driver's Assistance Package, for me to take note of as I took a lap of my favorite Ann Arbor, MI driving route. 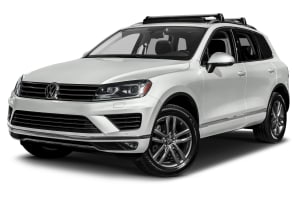