Volkswagen HyMotion says hi in the SportWagen and Passat in LA 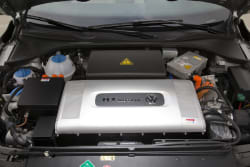 Toyota is certainly grabbing attention with the pricing of its Mirai fuel-cell vehicle, but Volkswagen is proving it understands hydrogen too at this year's Los Angeles Auto Show with versions of the Golf SportWagen and Passat that showcase its HyMotion system. The German brand is already testing the technology with a fleet of vehicles in the US.

What's surprising is how easy VW makes incorporating the HyMotion seem. The truly novel part about the tech is its hydrogen fuel cell that generates the electricity used to drive the vehicles. The electric motor and transmission come straight from the e-Golf, though, in this guise the powertrain produces 134 horsepower, a jump over the 113 hp of the electric Golf. VW estimates that the SportWagen HyMotion can hit 62 miles per hour in 10 seconds, but where the fuel cell really excels is in range. The company claims that the system offers 310 miles of driving distance.

The SportWagen also shows that fuel-cell vehicles can be just as useful as their traditional, internal-combustion counterparts. The hydrogen is stored at 10,150 psi in four carbon fiber tanks underneath the vehicle. A lithium-ion battery in the rear gets its power from regenerative braking and provides power when setting off, when the fuel cell is still building up electric power. None of the parts intrude on the passenger compartment, and according to VW, refueling takes just three minutes.

VW is also showing off the Passat HyMotion that uses the same drivetrain but stuffed into the sedan. A bunch of the vehicles are already roaming around California for testing. Audi uses a similar version of the system in the company's fuel cell A7, as well.

From all of VW's indications, the HyMotion powertrain is useable today, but don't expect to be driving one anytime soon. The company warns in its announcement of the system: "Before the market launch, a hydrogen infrastructure would have to be created: not only a broad network of hydrogen fuel stations, but also the production of the hydrogen itself." That's not exactly a ringing endorsement. Still, scroll down to read all of the technical details about VW's fuel cell solution.
Show full PR text
GOLF SPORTWAGEN HYMOTION MAKES GLOBAL DEBUT AT THE 2015 LOS ANGELES AUTO SHOW

Wolfsburg/Los Angeles - At the Los Angeles Auto Show, Volkswagen is presenting the world premiere of the Golf SportWagen HyMotion-a research vehicle with a fuel cell

powertrain. For this particular power source of the future, hydrogen and oxygen are combined in the fuel cell to form pure water. Energy is released in this "cold combustion" process, energy that is used to power a zero emissions electric motor.

The front-wheel-drive Golf SportWagen HyMotion accelerates from 0 to 62 mph (100 km/h) in 10.0 seconds. The hydrogen is stored safely in four high-tech carbonfiber tanks, which are located in the underbody, where they do not impede on interior space. Their fuel capacity enables a driving range of 310 miles (500 km), and they can be refilled in about three minutes. Unlike many of its competitors, Volkswagen is following the strategy of placing alternative drivetrains in high-volume production vehicles. Just like the all-electric e-Golf and the plug-in hybrid Golf GTE, the SportWagen HyMotion shows how fuel cells could be integrated into a well-engineered, usable, and attractively priced vehicle.

Several research vehicles have been built based on the U.S. version of the Passat, using the same drive components as fitted in the Golf SportWagen HyMotion. The fleet of Passat HyMotion vehicles is currently being tested on the streets of California.

The key drive components of the Golf SportWagen HyMotion were developed by Volkswagen Group Research in Germany. The fuel cell system conceptualized at the Volkswagen Technology Center for Electric Traction has a system power of 100 kW or 136 PS. In addition, the concept car has a high-voltage lithium-ion battery, which stores the kinetic energy recovered from regenerative braking, assists in the starting phase of the fuel cell and adds a dynamic boost to the maximum acceleration of the Golf SportWagen. The fuel cell and battery power an electric motor that has been adapted from the e-Golf.

The mechanical underpinnings for this innovative car are based on the Modular Transverse Matrix (MQB) that was developed by Volkswagen and is used throughout the Group. Thanks to use of the MQB, the current Golf and the new Golf SportWagen have advanced to become the world's first vehicle model series that can host all conceivable drive types.

Today, the Golf is already offered with gasoline engines (TSI®), diesel engines (TDI®), an electric drive (e-Golf) and, in some markets outside the U.S., natural gas and plug-in hybrid drivetrains. No other car offers such a variety of drive types. Volkswagen is showing the Golf SportWagen HyMotion to demonstrate for the first time how a hydrogen fuel cell could be implemented in an MQB-based vehicle. Before the market launch, a hydrogen infrastructure would have to be created: not only a broad network of hydrogen fuel stations, but also the production of the hydrogen itself. Hydrogen only makes sense as a fuel if the primary energy used to produce it comes from renewable sources.

Volkswagen has integrated the drive components of the Golf SportWagen HyMotion in the front of the car. The battery is housed above the rear suspension, and the tanks are mounted in the vehicle floor. Thus, the interior of the Golf SportWagen HyMotion offers the same amount of space as in all other versions of the model. This optimal space utilization was possible because provisions were included for all technically feasible drivetrains and body versions in the planning of the MQB architecture.

In the Golf SportWagen HyMotion, the components from high-volume production vehicles were merged with entirely new engineering. As noted, the electric motor was adapted from the new e-Golf, and the motor and coaxial two-stage 1-speed transmission are located at the front of the engine compartment; both components were developed by Volkswagen. Also arranged in the engine compartment are the stacks of the hydrogen fuel cell; the cooling system; a tri-port converter that regulates the voltage between the electric motor, the fuel cell and the lithium-ion battery; and the turbo compressor. The latter ensures that oxygen from the surrounding air flows into the fuel cell.

The power electronics are located in the center tunnel area; they convert the direct current (DC) into three-phase alternating current (AC) which is used to drive the motor. The power electronics also integrate a DC/DC converter, which converts energy from the high-voltage battery to 12 volts to supply the 12-volt electrical system.

The high-voltage lithium-ion battery is mounted close to the trunk and rear suspension. The 12-volt battery is also mounted at the rear. Two of the total of four carbonfiber composite hydrogen tanks are housed compactly under the rear seat and the other two in the luggage compartment floor. The hydrogen is stored in the tanks at a pressure of 700 bar (10,150 psi). As in all other Volkswagen vehicles, the tank filler neck is located on the right side at the back of the car.

The lithium-ion battery is the second powerplant in the vehicle, and it plays an important role in the drive system. As mentioned, it stores the energy recovered during regenerative braking. It is also an important component in all phases during which the chemical reaction needs to be initiated by feeding oxygen and hydrogen to the fuel cell (the latter via the turbo compressor), such as when driving off from a start. At this point in time, the fuel cell has not built up enough electrical power to drive the motor by itself. In these phases, the lithium-ion battery jumps into action and supplies energy to the electric motor. The high-voltage battery also operates like a turbocharger during fast acceleration and while accelerating to top speed. In what is referred to as boosting, the fuel cell and battery work in an alliance to supply overall system power of 100 kW or 136 PS.

Functional principle of the fuel cell

Volkswagen Group Research is utilizing the company's fourth-generation fuel cell in the Golf SportWagen HyMotion Concept-and simultaneously in a research vehicle based on the U.S. Passat. Group brand Audi is also presenting the same fuel cell at the 2015 Los Angeles Auto Show in an A7. All three fuel cells are based on the LT PEM fuel cell stack developed in Germany. LT stands for the type of fuel cell: Low Temperature. PEM stands for Proton Exchange Membrane. The key element of each individual fuel cell-many of which are combined to form a stack-is the proton-conducting membrane (PEM). Each membrane is located between an anode and a cathode in the fuel cell. Hydrogen flows into the cell at the anode end and oxygen at the cathode end. The hydrogen and oxygen react and combine to form water at the cathode end. Energy is released in this process.

At the anode, the hydrogen is split into electrons and protons. The positively charged protons "migrate" through the membrane to the cathode. The negatively charged electrons flow to the cathode via the external electrical circuit. This flow of current supplies electrical energy. At the cathode, the protons react with the inflowing oxygen and the electrons to produce "process water", most of which escapes via the exhaust system. Around 60 percent of the energy input in the form of hydrogen is converted to electricity. The fuel cell converts the chemical energy of an oxidation process called "cold combustion" directly into electrical energy. The "exhaust gas" is nothing other than clean water vapor.

Since the 1990s, Volkswagen has been researching the potential of hydrogen fuel cells and transferring this drive technology to production cars. At the end of the past decade Volkswagen decided to build a dedicated Technology Center for Electric Traction near its headquarters in Wolfsburg, to further advance its capabilities in fuel cell development. The Isenbüttel site was chosen for this center and construction of a special research center for electric drivetrains began in 2001. The infrastructure of the technology center includes a dedicated hydrogen fuel station. Volkswagen produces the hydrogen for the pressure tank station from renewable solar-generated electricity. A photovoltaic array was installed at the site for this purpose.