When Jaguar lifted the veil on its new XE sports sedan earlier this month, it only revealed details on one engine – that being the 3.0-liter supercharged V6 in the flagship XE S. But we already knew that the British automaker's new entry-level model will offer many other powertrain options, and now it has revealed a little more.

Jaguar has been developing a new family of 2.0-liter four-cylinder engines it calls Ingenium, which will be offered in a wide array of configurations and specifications. In advance of its debut at the upcoming Paris Motor Show, the Leaping Cat marque has announced the specifications of the two diesel versions. The first will offer 161 horsepower and 280 pound-feet of torque and some of the best environmental credentials on the market. There will also be a more potent version with 177 hp and 317 lb-ft, which Jaguar says is "one of the highest torque outputs in the class." Either way, both versions feature variable exhaust valve timing, cooled low-pressure exhaust gas recirculation and selective catalytic reduction technologies to help meet the stringent Euro 6 standards.

That's all well and fine, but considering that Jaguar doesn't offer diesels in North America, the chances of these oil-burners making their way Stateside seem slim. But if you watch the video below, you'll also find basic specs on their gasoline counterparts as well. Like the diesels, they're turbocharged and displace 2.0 liters, but in petrol form, they offer 197 hp and 206 lb-ft of torque, or 236 hp and 250 lb-ft.

Though we're only likely to get the automatic version in America, globally speaking Jaguar will offer both six-speed manual and eight-speed automatic transmissions. Whatever the specification, though, the new engines are set to roll off the line at the company's new plant in the West Midlands at a rate as high as one every 36 seconds, should the demand exist. 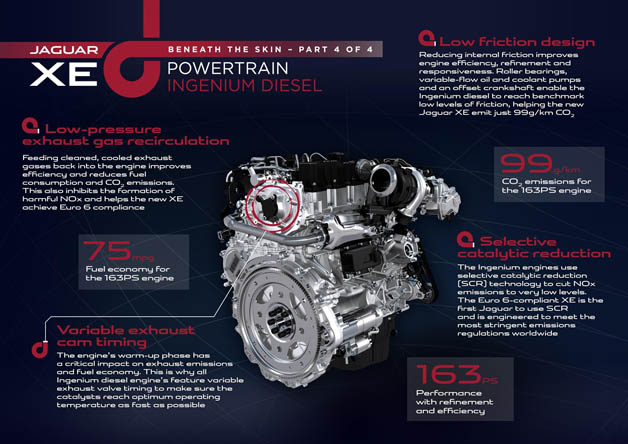 Whitley, 25 September 2014 - With the new Ingenium diesel engines driving the rear wheels, the aluminium-intensive XE is the most fuel-efficient Jaguar yet, with CO2 emissions from just 99g/km.The Ingenium range is produced at the new £500 million, 100,000m2 Engine Manufacturing Centre in the West Midlands in the UK. Engines will come off the fully flexible lines at rates of up to one every 36 seconds.

Starting from a clean sheet meant that Jaguar's powertrain engineers could make the Ingenium engines as light and efficient as possible, and deliver the blend of power, torque and smoothness customers expect. These state-of-the-art engines were proven over 2 million miles of real-world testing.

"The new generation of Ingenium diesel engines are wholly designed and manufactured in-house. No opportunity has been missed in ensuring their design is right on the cutting edge of technical advancement."
Ron Lee, Group Chief Powertrain Engineer, Jaguar

The new XE will feature two versions of the 2.0-litre Ingenium diesel. The first, rated at 163PS/380Nm, delivers benchmark efficiency figures of 75mpg and 99g/km CO2 without any compromise to launch performance or mid-range acceleration. The 180PS/430Nm variant has one of the highest torque outputs in the class.

The Ingenium diesels will be joined at launch by powerful, efficient, direct-injection petrol engines: turbocharged 2.0-litre four-cylinders and the outstanding supercharged 3.0-litre V6.