View All Specs
It's had numerous upgrades and one big facelift, but before was able to net a second generation, it received a death sentence: the eight-year-old Volkswagen Eos will be decommissioned in 2015. The Final Edition seen here subs for the Sport in the model's three-trim lineup (as of this writing, the Sport is still on VW USA's website), slotting in between Komfort and Executive. After a jaunt through Virginia horse country, we found this Volkswagen to be a smart and capable little convertible that has run out of reasons to live.

Driving Notes Volkswagen says the Beetle Convertible will take over the role the Eos played, which makes a lot more sense considering its price – the Beetle is less expensive, and when speaking of character, the Beetle (like its Mini competition) actually has some. The Eos is plenty pleasant and fine doing what it does, but not good enough that there's a reason for VW to continue doing it. 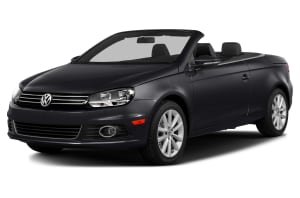