BMW is taking a page from the Harley-Davidson playbook with its groundbreaking R NineT. A retro cafe racer with an urban hooligan twist, the bike is fully customizable from fork to exhaust. Of course, any motorcycle can be customized, but the fact that BMW has built its newest bike to encourage modification using parts that can be swapped with simple tools is a radical move for a motorcycle maker best known for its plug-and-play touring bikes.

To underscore exactly how radical, BMW has even partnered with custom heavy-hitter Roland Sands Design, which developed the initial concept for the bike and is now manufacturing a full line of parts and accessories for the R NineT, including radial valve covers ($950), retro racing saddles ($400-$420), radial gauge housing ($400) and a radial headlight bezel ($250), among other things, all of which can be swapped with a socket wrench or screwdriver instead of a hacksaw, wire cutters and TIG welder.

Alas, the bike I tested for two weeks was stock, so consider it a blank canvas.

In development since 2011, the $15,395 R NineT is a tribute to BMW's 1973 R90S superbike. As such, it's powered by a classic flat-twin that's been modernized with a gigantic 1,170-cc displacement and oil as well as air cooling. From the saddle, looking down, the protruding cylinders make the bike look as stocky as one would expect for a machine of German provenance. It's as if the R NineT is powered with wienerschnitzel instead of 91 octane. 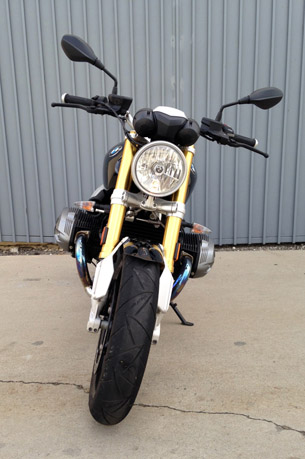 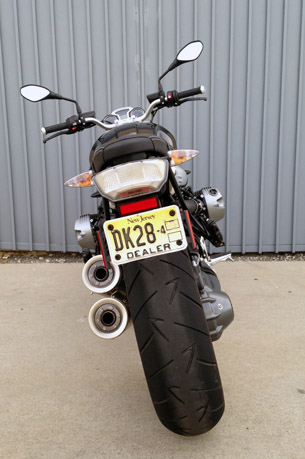 The boxer delivers an impressive amount of grunt off the line and remains smooth and torquey until midway through the powerband.

At idle, the boxer engine delivers a loping one-two punch, tugging the bike right and left ever so slightly. Twisting the grip, the push-me-pull-you sensation disappears entirely, delivering an impressive amount of grunt off the line that remains smooth and torquey until midway through the powerband. Its sweet spot is about 4,000 rpm on its way to an 8,500-rpm redline. By five grand, some vibration begins to transmit through the hand grips.

No matter. The engine is mated with a six-speed transmission, so voiding the vibration is merely a matter of upshifting. Lacking a windshield, there's a limit to how fast one wants to go. Making an impressive 110 horsepower delivered to the rear wheel with a standard BMW shaft drive, the R NineT easily clears 100 miles per hour, but doing so might inspire some Rollie-Free-style riding.

The gearbox is easy to shift, supple and not firm, and neutral is easy to locate whether the bike is warmed up or otherwise (the latter has been an issue with some previous BMW R-bikes). The only time the transmission tends to grate is when riding in heavy stop and go traffic for long periods of time, when the clutch's weighty action can become tiresome. However, the shifter itself is perfectly judged.

Making plenty of power to get riders in trouble, the R NineT slows things down with dual floating disc brakes out front and sport-bike-esque 12.6-inch four-piston calipers. A single 10.4-inch disc does the job out back with a dual-piston floating caliper. Putting the clamps on 17-inch wheels front and rear, the brakes feel responsive, progressive and smooth rather than twitchy. BMW was the first motorcycle maker to employ anti-lock brakes in 1988, and it continues the tradition with the R NineT: ABS is standard equipment. Hooligan as the R NineT can be, BMW still makes safety a priority. 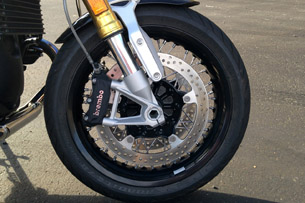 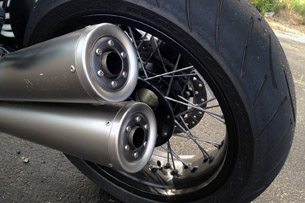 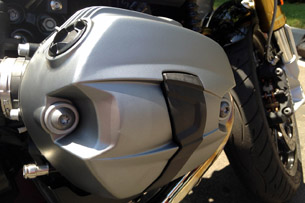 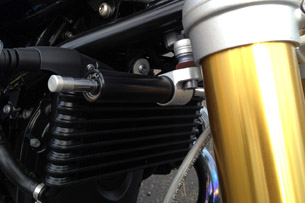 BMW's K bikes and S 1000 R are sharper tools for carving canyons, but the R NineT is well balanced.

When properly seated, the R NineT is slightly aggressive, ergonomically. The rider triangle positions its operator leaned forward, without placing too much weight on the wrists unless, of course, the bike has been modified with cafe-racer-appropriate clip-ons. The large aluminum gas tank is notched to accommodate knees, though the bike's air intake prevents the right knee from sitting as flush as the left one. After a long ride, I was acutely aware of this discrepancy. The saddle is narrow where it counts – where seat meets tank, making the R NineT one of the lowest BMWs on the market. At 30.9 inches from the asphalt, even average height riders should have no problem standing flat-footed at stops.

But who wants to stop? Its fairly short wheelbase and low saddle make it easy to fling around, despite its 489-pound curb weight. BMW's K bikes and S 1000 R are sharper tools for carving canyons, but the R NineT is well balanced. Its cornering isn't precise so much as comfortable – it's more content to sashay than to slice and dice. This is a bike best used for bombing around the city, though the clutch can feel heavy after long stints in sticky stop-and-go traffic. And after long days in the saddle, I became painfully aware of my posterior, mostly due to the bike's stock seat. 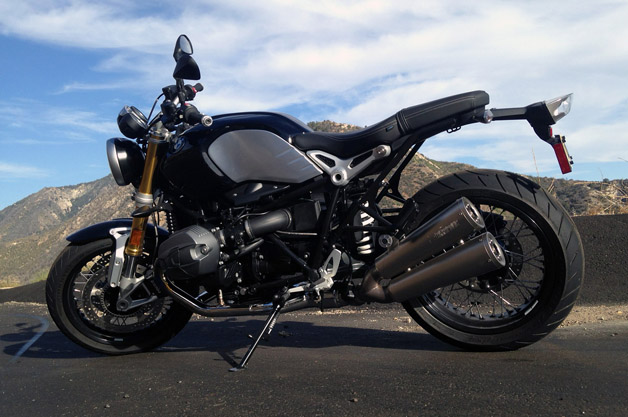 Stock, the R NineT seats two, but its tail section can be taken off in three steps to make it a far-better-looking single seater.

Los Angeles is similar to many cities in that its roads are often poorly maintained. Thankfully, the BMW's suspension is, like many things on the bike, adjustable – at least it is in the rear for pre-load as well as rebound. Its upside-down telescopic front fork offers about four-and-a-half inches of travel, but is not adjustable. Its single-sided swing arm is one of many attributes on the BMW R NineT designed to make things easy for weekend garage monkeys. I didn't feel the need to tweak the suspension during my ride, but then again, at 135 pounds, I'm lighter than most buyers of this bike are likely to be. Even so, I didn't bounce out of the seat on rough roads, suggesting there's enough built-in compliance even without fiddling for many riders.

The BMW's modular frame is unique to this BMW. Stock, it seats two, but its tail section can be taken off in three steps to make it a far-better-looking single seater. It looks best with the classic cafe racer tail hump and the rear passenger pegs removed.

The rear seat frame is held together with eight screws and the end piece is secured with four bolts. The passenger pegs can be removed with six bolts. Even the headlight, taillamps and instrument cluster have been designed for easy replacement. They plug in to the wiring harness, negating the need for snips and a cutter. 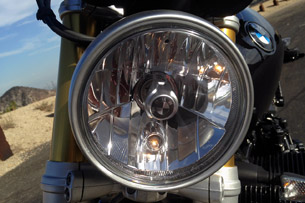 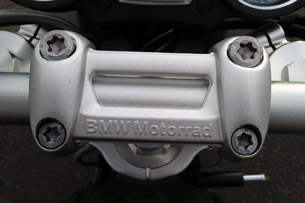 Once seated, the rider will note that the classically circular gauges for the speed and tachometer are analog, but the numbers are small and difficult to read. They're bridged with a digital dash for information on the bike's fuel and odometer, which is subtly shaped like a T. There are no adjustable drive modes or traction control switches – beyond the aforementioned ABS, you're on your own.

Stock, the R NineT is outfitted with a pair of pipes that emit an impressive growl completely out of character for BMW, whose bikes are often compared with sewing machines. The R NineT's standard pipes are stacked bugles, but titanium low- and high-slung pipes from Akrapovic are available as more visually pleasing, highly advised accessories.

Fusing BMW's modern engineering with a classic bodystyle isn't without its issues. The performance improves, but the aesthetics suffer. The radiator, in particular, appears like an afterthought and looks clumsy when paired with the eye-catching boxer engine. Even worse, BMW decided to affix the bike's front turn signals to the upper corners of the radiator, which creates the unintentional effect of misplaced dog ears. Anodized in gold, the fork color strikes this rider as just one too many shades of metal to look as classic as the cafe racer it's meant to be. 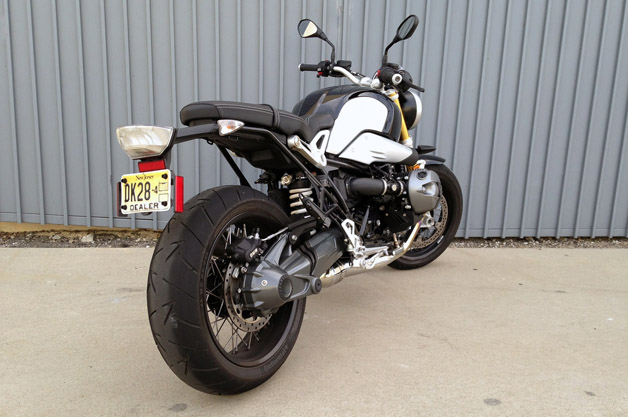 There are a lot of beautiful design details on the R NineT, including a classic round headlight trimmed in real metal and forged fork yokes with conical domed screws. The two-tone, 4.8-gallon fuel tank with its exposed aluminum sides is hand finished in Berlin and BMW Motorrad is stamped in the triple clamp.

The R NineT isn't perfect, but it all adds up to an impressive new take on an old and surprisingly enduring style of bike.