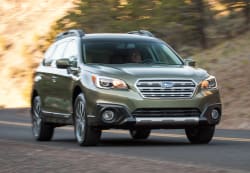 The Subaru Legacy and Outback are the latest vehicles to be awarded the Insurance Institute for Highway Safety's most prestigious safety title, Top Safety Pick+.

As we've explained many times before, this only applies vehicles that can score an "Acceptable" or "Good" rating on the five IIHS crash tests and earn at least a "Basic" rating for crash prevention systems.

According to IIHS, Subaru holds more Top Safety Pick titles than any other manufacturer, with seven vehicles earning the safety award. Of those, four of them are TSP+ vehicles.

Scroll down for video of the Legacy's small-overlap test, as well as press releases from both IIHS and Subaru.

The all-new 2015 Subaru Outback also achieved the highest possible rating of 'good' in the Institute's crashworthiness evaluations, as well as a 'superior' rating in the front crash avoidance testing. Similar to the mid-size Legacy, the Outback crossover is a 2014 IIHS TOP SAFETY PICK+ winner when equipped with optional EyeSight®.

Subaru has more 2014 IIHS Top Safety Pick awards than any other brand. Seven Subaru models, including the BRZ, Impreza, WRX/STI and XV Crosstrek, have earned 2014 safety awards from IIHS – four with TOP SAFETY PICK and three with TOP SAFETY PICK+ including its Forester, Legacy and Outback models equipped with optional EyeSight ®.

The Institute's findings reinforce our dedication to building safe vehicles," Thomas J. Doll, president and chief operating officer, Subaru of America, Inc. "We are proud of the 2014 TOP SAFETY PICK endorsement for every Subaru vehicle in our line-up."

About Subaru of America, Inc.
Subaru of America, Inc. is a wholly owned subsidiary of Fuji Heavy Industries Ltd. of Japan. Headquartered at a zero-landfill office in Cherry Hill, N.J., the company markets and distributes Subaru vehicles, parts and accessories through a network of more than 600 retailers across the United States. All Subaru products are manufactured in zero-landfill production plants and Subaru of Indiana Automotive Inc. is the only U.S. automobile production plant to be designated a backyard wildlife habitat by the National Wildlife Federation. For additional information, visit media.subaru.com.

ARLINGTON, Va. - The redesigned Subaru Legacy earns a good rating in the Insurance Institute for Highway Safety's small overlap front crash test, with top marks in every measurement category. With its optional front crash prevention system, the midsize car is a TOP SAFETY PICK+ winner. The award also applies to the Outback, the station wagon version of the Legacy.

The previous generation Legacy also was a TOP SAFETY PICK+ winner, earning an acceptable rating overall in the small overlap front test. Structural performance improved to good for the 2015 Legacy, compared with a marginal score for the outgoing model. The driver space was maintained well, with the safety cage preventing excessive intrusion into the occupant compartment. The dummy's movement was well-controlled, and the frontal and side curtain airbags worked together to protect the head from contact with interior structures. Ratings for restraints, dummy kinematics, and injury measures for the head and neck, chest, pelvis, and legs and feet are all good.

The Institute added the small overlap evaluation to its testing lineup in 2012. In the crash, 25 percent of a vehicle's front end on the driver side strikes a rigid barrier at 40 mph. It replicates what happens when the front corner of a vehicle strikes another vehicle or an object such as a tree or a utility pole.

The Legacy and Outback earn superior ratings for front crash prevention when equipped with EyeSight, their optional forward collision warning system with autobrake. In track evaluations, the system completely stopped the vehicle in the Institute's 12 and 25 mph front crash avoidance tests.

Subaru has the most 2014 TOP SAFETY PICK awards of any brand. Its other winners include the BRZ, Impreza, Forester, WRX and XV Crosstrek. To qualify for TOP SAFETY PICK, a vehicle must earn a good or acceptable rating for small overlap protection, as well as good ratings in the Institute's moderate overlap front, side, roof strength and head restraint tests. TOP SAFETY PICK+ winners must meet those same criteria and also earn a basic, advanced or superior rating for front crash prevention.