Pete Bigelow
A former chief executive officer of one of the world's largest makers of red-light traffic cameras was indicted on federal corruption charges Wednesday, along with two city officials in Chicago.

A federal grand jury returned a 23-count indictment against the three, alleging that ex-Redflex CEO Karen Finley provided approximately $570,000 in cash and other improper benefits to an assistant transportation commissioner in exchange for inside information that helped the Phoenix-based company win contracts in Chicago worth as much as $124 million.

For a decade, Finley schemed with city official John Bills to help secure the rights to city contracts by providing him cash, meals, hotel stays, rental cars and golf outings, according to the charges. Redflex funneled more money to Bills through a friend, Martin O'Malley, who was hired as an independent contractor by the company and passed some of his $2 million in compensation back to Bills, the indictment alleges.

"When public officials peddle influence for profit, the consequences are severe," said Zachary T. Fardon, US Attorney for the Northern District of Illinois. "When corporate executives enable that corruption, the same rule applies. We will attack alleged public corruption from every angle. 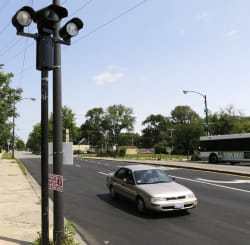 Federal prosecutors said their investigation is ongoing. The three will be arraigned on a still-to-be-determined date in Chicago.

The Chicago Tribune first reported the relationship between Bills and Redflex nearly two years ago, and the US Attorney's Office alleges the payoffs took place between late 2002 and late 2012.

The indictments come amid huge problems for the red-light cameras in the city and questions about the worth of such systems in general. Last month, the Tribune reported dozens of dramatic spikes in the number of tickets generated by individual cameras at seemingly random times and places throughout the city. The city had fought hard to withhold the public data reporters used to detail the anomalies, the newspaper noted in its coverage. The unexplained spikes resulted in thousands of undeserved $100 tickets.

Finley, a resident of Cave Creek, AZ, started seeking Bills' influence in late 2002, and in February 2003, Bills provided information to give Redflex an advantage over its competitor in a pilot program, according to the charges. Bills, a voting member of an evaluation committee, helped steer permanent contracts toward the company.

"Today's indictment underscores our commitment to work in a collaborative effort to promote honest and ethical government at all levels and to prosecute those who allegedly violated the public's trust," said Robert J. Holley, special agent in charge of the Chicago office of the FBI.


Between 2004 and 2008, Chicago paid Reflex approximately $25 million to install and maintain more than 100 red-light cameras in city intersections.

Between 2004 and 2008, Chicago paid Reflex approximately $25 million to install and maintain more than 100 red-light cameras in city intersections. The company also assisted in processing violations.

Redflex won another contract from the city in February 2008 to operate the existing system worth $33 million, and Bills was again a member of the evaluation committee that led to a $66 million contract in an expansion of the program which resulted in nearly 250 more red-light cameras installed in the city.

By 2010, the US Attorney's Office says Chicago had the largest red-light program in the United States, and that the city represented 20 percent of all Redflex's business. Amid revelations about Finley and Bills, Chicago Mayor Rahm Emanuel said in February 2013 the city would stop doing business with Redflex.

Today, Redflex says it operates more than 2,000 photo-enforcement systems in more than 220 cities throughout North America, according to its website.

In a statement issued Wednesday, a spokesperson for Redflex said, "Last year we announced aggressive leadership changes, industry leading compliance policies and procedures and a distinction between our past and present. RedFlex Traffic Systems is moving forward. Since we announced these changes we have signed, renewed or executed over 100 contracts."