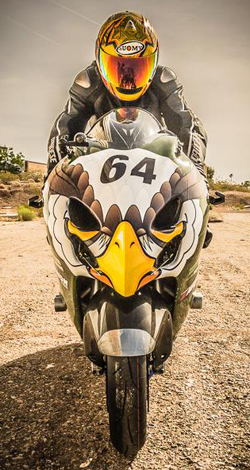 The V2 Rocket from Brutus Electric Motorcycles is on the launch pad, ready to go ballistic on Pikes Peak. Though it just turned a wheel for the first time a week ago, the custom-built, battery-powered bike is now on the mountain and hopes to turn some heads during the Race to the Clouds, aka the Pikes Peak International Hill Climb (PPIHC). Certainly it's an eyeball magnet just resting on its kickstand.

This new bike is a bit different from previous Brutus builds. After starting out with a throwback cruiser-style machine, the outfit then got beastlier but stayed close to its roots on Brutus 2. The Brutus V9 – a machine that company principal Chris Bell tells us is getting them a lot of attention lately – used the same platform, but added fairings and saddlebags and other interesting bits for that full 'bagger" effect. The V2 Rocket updates the trellis frame and DC drivetrain of its forebearers, simplifying things by doing away with the transmission and using a more powerful motor, all the while putting a sports bike twist on things. Think less traditional Harley, more Hayabusa.

With its 9-inch Warp motor and Zilla controller pulling power from an 11.5-kWh lithium battery pack from EVDrive, it boasts 130 electric horses, boosted by 172 pound-feet of torque. Cooling for the motor and batteries comes courtesy of air intakes on the front fairing. It also benefits from a shot of liquid carbon dioxide sprayed into the opening just prior to runs. The team reports this has been quite effective in their admittedly-limited experience to date. Exact top speed is unknown, but the bike did manage to quickly climb up to 152 miles per hour while sitting on a dyno before shipping out to Colorado. Bell believes they may be able to take it up past 185 mph with a gearing change and the white expanse of the Bonneville Salt Flats in front of it. For Pikes Peak, however, that kind of speed isn't nearly as useful as acceleration.

After an initial bit of time on the course during a group ride, rider Jeremiah Johnson told us he felt the bike's biggest challenge might be getting the suspension sorted. While dealing with a faulty bearing, the team also shortened up the wheel base by an inch and swapped out some gears, resulting in a huge improvement. Despite dropping the bike early in the day (nothing damaged that a rubber mallet couldn't fix), Johnson now says he's "getting a real feel for this bike and am really happy with it so far."

Brutus is offering the V2 Rocket in race form on its website beginning at $26,490. A street version will also be made available later, though it will likely use different body work. The big news here, though, might be the size of the battery packs, ranging from 17.8 kWhs to 21.7 kWhs. That larger pack would probably yield something close to a 200-mile range in ordinary street riding. While prices for this later version haven't been decided, it would definitely cost more than its track-bound brother. Brutus is also mulling a naked version to show off its underpinings to the world.

You can follow the team's progress on the Brutus Motorcycles Facebook page. Scroll below for video from its first at-speed practice run. While we can't say whether the V2 will beat its only class competitor – a lighter, but less powerful bike from Japanese team EV Mirai – in Sunday's race, the gas-powered supermoto that started ahead of our protagonists in practice certainly was easy pickings.