The Brits don't really have a major auto show these days. Not in a conventional sense, anyway, with stationary vehicles under floodlights in a closed exposition space. What they do have, you could argue, is much better: the Goodwood Festival of Speed, where the public can view the latest machinery not only under an open sky, but in motion as well, speeding up Lord March's front lawn. And this year, British automakers are rolling in with some very enticing new metal.

In the past few days alone we've confirmed the McLaren 650S GT3 and MSO, Jaguar F-Type Project 7, Range Rover Sport SVR and Ariel Ace will all be revealed for the first time at Goodwood this weekend. Ford isn't, strictly speaking, a British automaker, but for all its history in the UK, it might as well. So it's chosen Goodwood as the site to unveil its refreshed Focus ST.

The upgraded Blue Oval hot hatch still packs a 2.0-liter turbo four with 252 horsepower and 270 pound-feet of torque driving through a six-speed manual to the front wheels, so we're not expecting much change in measurable performance. But Ford has given the new Focus ST a new front suspension setup and a new electric power-assisted steering rack that combine to promise improved handling.

While it was at it, Ford has equipped the 2015 Focus ST with redesigned front and rear fascias, HID and LED lighting, 18-inch wheels and an improved cabin complete with a redesigned center stack, center console and front door panels, a new flat-bottom steering wheel and standard rear-view camera. Buyers will also be able to opt for a new shade of silver and black or red racing stripes as well as a heated steering wheel and eight-way power driver's seat – all of which promises to make one of our favorite hot hatches that much better, and that can be no bad thing.

GOODWOOD, U.K., June 27, 2014 – The 2015 Ford Focus ST makes its global debut today at Goodwood Festival of Speed in the United Kingdom – the ideal venue for showcasing the enhanced driving dynamics of Ford's global performance version of the new Focus.

"Since its debut, Focus ST has been bringing our fun-to-drive DNA to the hot hatch segment with a uniquely Ford blend of driving dynamics, performance and style," said Raj Nair, Ford group vice president, Global Product Development. "Now, with improved dynamics, an updated suspension, new styling and a more sophisticated cabin, we expect the 2015 Focus ST will remain the hottest hatch worldwide."

Focus ST will benefit from technology and craftsmanship first revealed earlier this year for the new Ford Focus – the world's best-selling global nameplate. Ford introduced the first Focus ST in 2002; since then, more than 140,000 examples have been sold in more than 40 countries worldwide.

Refinements for the upgraded 2015 Focus ST include:

"We are proud Ford has long enjoyed a reputation for producing performance hatchbacks with superb driving dynamics, and the new Focus ST further ups the ante," said Nair. "The engineering enhancements to the suspension and steering deliver greater responsiveness, agility and precision – all of which will reward the performance enthusiast with an exhilarating driving experience."

The engine is paired exclusively with a six-speed manual transmission with a performance-oriented, short-throw shifter. The gear ratios – exclusive to ST – deliver rapid acceleration in lower gears and comfortable cruising at speed.

The sports body kit also includes body‑colored side skirts and diffuser elements either side of the exhaust, and a rear roof spoiler optimized for aerodynamic performance. All new Focus ST models feature twin-hexagonal center tailpipes.

"The design of the new Focus is stronger and sportier, and that allowed us to make the new ST even more aggressive and dramatic," said Moray Callum, Ford group vice president, Global Design. "The front bumper is deeper, the honeycomb upper grille is higher and more upright, and the lower grille is larger. The deeper rear bumper really emphasizes the width of the car."

Cockpit-style cabin
Ford has redesigned the Focus interior for a more intuitive layout, with a clearer visual connection between key components and significantly fewer buttons in the cabin.

Advanced technologies
Driver-assist, convenience and connectivity technologies include Ford SYNC®. 2015 Focus ST drivers will have access to powerful capabilities thanks to a host of new functions developers can integrate as they modify their apps to communicate with enhanced SYNC® AppLink™.

Android and iOS smartphone owners can download more than 60 AppLink-enabled apps from the Apple App Store and Google Play Store. 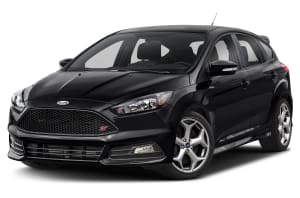