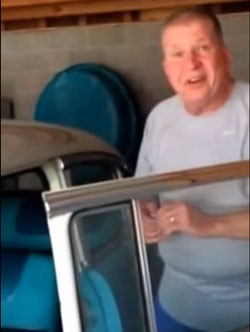 After watching this video, we're not sure which is a more sure-fire way to make a man cry happy tears: hand him the keys to the car of his dreams, or show him how much his children love him. In this case, it was probably the insuppressible combination of the two.

The story starts when an eight-year-old boy promised his dad that, when the father would turn 57 years old, the son would buy him a '57 Chevy. Decades later he made good on the promise, buying this pristine two-tone teal and white 1957 Chevrolet Bel Air when the opportunity arose. He held on to it for two years so that he could, true to his childhood word, give the car to his dad on his 57th birthday.

It's about as touching a story as we've ever run, especially with Father's Day now just a week away. Watch the (regrettably poor) footage of the handover in the video below to witness the embodiment of a father's happiness.