Musk will remain CEO for 4-5 years, Superchargers open to other OEMs It's been quite a while since we've had news about the Tesla Roadster. The original Tesla electric vehicle hasn't been sold in the US for years and we're in a quiet period before the next-generation shows its face. We were fine with the status quo – it's not like Tesla Motors isn't keeping busy with other projects in the meantime – but something that CEO Elon Musk said during the annual shareholder meeting caught our eye this week: the Roadster will get some sort of update before the end of the year.

Details were obviously not disclosed, but Musk did say that something cool is coming:

We are planning on I think a fairly exciting upgrade to the Roadster. I'm hoping we can get it done later this year. I did say it would be this year and ... yes, we will get it done this year. ... So, we're going to do something cool with Roadster before the end of this year.

Anyone want to guess what this upgrade might be? We know that Roadster batteries are performing better than expected, so we're going to discount that possibility that these older EVs will be made compatible with Tesla's Supercharger technology. But Musk did say at the meeting that this tech is available to other automakers, if they could somehow make an EV that can handle the Supercharger's 135-kW output (a number that Tesla hopes to increase in the future):

There is no other electric car that can accept anything close to 135 kilowatts. We are more than happy to have other manufacturers do this. And I've said this publicly on a few occasions. No one's approached us and said they'd like to use it. We are happy to have them do so. They just have to contribute to the capital cost, so figure out what percentage of the time are their cars using the Supercharger network and then they can make a contribution proportionate to their customer usage of the Supercharger network. So, we're very open to such a thing. 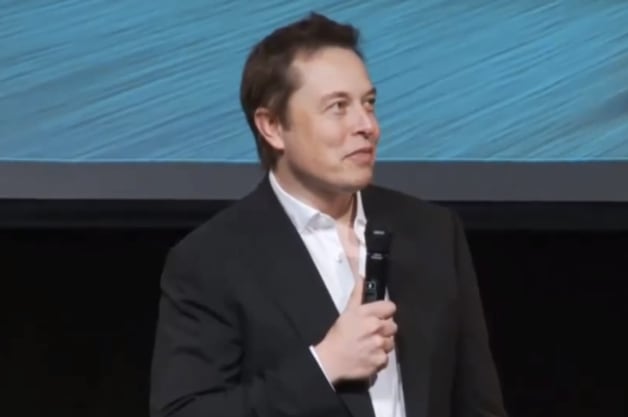 Musk also confirmed he is open to remaining at Tesla for another half decade or so, until at least when the company's lower-cost, third-generation car gets to "volume production." He said that's maybe four or five years away and that there is "a lot of time" to figure out who will replace him when he does finally step down. We know the car is not going to be the Model E (thanks to Ford's trademark, Musk said) and that the company's targets are for it to cost around $35,000 before incentives and have a range of more than 200 miles.

There will also be an upcoming software update will allow for more customization of today's Model S, including the ability to name your vehicle and have that name show up in the companion smartphone app. Musk also said the car will soon be able to anticipate where you're going and potentially route you on an alternate path based on traffic conditions.

You can learn more about what was said at the meeting, and see videoes of the event, here.