View All Specs
Not everyone is an automobile enthusiast, but for the most part, those who possess valid driver's licenses are usually able to differentiate between a performance car and a luxury car. Furthermore, they are usually capable of telling approximately how old a car is based on its styling.

Even as its true devotees acknowledge the sedan's Pontiac GTO and Pontiac G8 ancestors while hoping that GM's latest will finally earn the merit and recognition it deserves, this made-in-Australia model is a real head scratcher to most. The low volume, rear-wheel drive sport sedan, fitted with a powerful V8 and the world's shortest options list, sits in most Chevrolet showrooms as nothing more than a $45,000 mystery to most of the customers who walk in.

"What is it?" was the most common question during my week with the Chevrolet SS. The answer took me a full seven days to figure out. 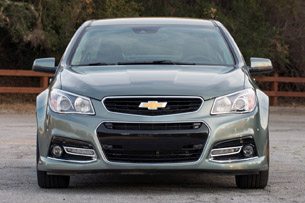 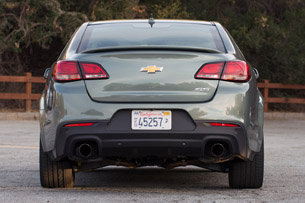 The new-for-2014 Chevrolet SS hints at performance from just about every angle.

A quick walkaround reveals quite a bit about this car, even without opening the hood. The new-for-2014 Chevrolet SS, known as the VF-model Holden Commodore on its home turf Down Under, hints at performance from just about every angle. Its wide stance and meaty tires (the latter with their attendant nonexistent gap between rubber and wheel wells), suggests impressive handling. Oversized brakes, with logos on the calipers, reveal strong stopping capability, while two large exhaust pipes, exiting out of each side of the lower rear fascia, are telltale signs of a strong engine. Lastly, a rear decklid spoiler conjures up images of high-speed stability.

Pulling the chrome handle on the driver's door reveals a cabin tuned for serious drivers, as well. A meaty three-spoke steering wheel is mounted ahead of analog gauges, and leather sport bucket seats with red contrasting stitching welcome the front occupants. Aluminum pedals reside in the footwell, and synthetic suede accents the dashboard and boot around the traditional transmission lever. Without question, 'sport' is this interior's dominating motif.

Yanking on the hood release confirms the four-door's mission. Hidden beneath a disappointingly bland plastic engine cover is a massive 6.2-liter V8 – enthusiasts know this engine as the LS3 – tuned to make 415 horsepower and 415 pound-feet of torque. Just aft of the powerplant, mostly hidden out of view, is GM's 6L80 six-speed automatic transmission. 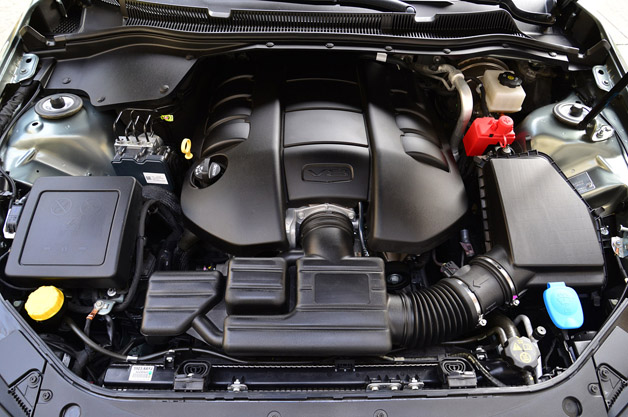 Hidden beneath a disappointingly bland plastic engine cover is a massive 6.2-liter V8.

In late 2012, at the NASCAR SS model's introduction, Mark Reuss, GM's North American president, made it very clear that although the upcoming production model appears to be a successor to a previous Aussie, it is on a different mission - and it will carry a premium price. "This is not a return of the Pontiac G8," said Reuss. "The only reason we brought this car over is to go racing," he added, before calling the new sedan, a "four-door Corvette." Those three words stuck with me as I pressed the start/stop button and listened as the V8 roared to life.

While premium fuel ignites inside the combustion chambers, the passenger cabin on the other side of the firewall simultaneously comes to life. Orange needles sweep over white numbers on the analog gauges, while the eight-inch color touchscreen illuminates with a bold Chevrolet Bowtie as GM's MyLink infotainment and telematics system initializes. The driver's seat is comfortable, but the wings near the top of the seats hit my shoulders awkwardly (I'm six-foot, two-inches tall) – they may take some getting used to. There will be no complaints from the backseat, however, as the two outboard passengers will find plenty of room and good outward visibility through their large windows. The rear seats don't fold, but a pass-through allows long objects to extend from the trunk.

When the automaker chose to import the four-door, it decided that its $43,475 base price would include a high level of standard content.

In terms of passenger comfort, this halo sedan isn't going to win any segment awards. But that doesn't mean it's going to disappoint, either. When the automaker chose to import the four-door from Elisabeth, Australia, it decided that its $43,475 base price would include a high level of standard content. Occupants enjoy leather upholstery, driver and front passenger eight-way power heated and ventilated seats, passive entry, color head-up display, HID headlamps and MyLink with navigation as standard equipment. There are just five exterior colors (Silver Ice, Red Hot, Phantom Black, Heron White and Mystic Green) that are all offered over Jet Black upholstery. The options list includes just two items: a full-size spare ($500) and a power sunroof ($900). My test car was fitted with neither, but it did include a mandatory gas guzzler tax ($1,300) and destination fee ($995) that brought the total to $45,770.

A traditional shift lever (PRND+/-) moves GM's six-speed transmission into gear, and a light throttle whisks the SS off the line. The front-engine, longitudinally mounted, rear-wheel drive configuration of the SS mirrors the powertrain layout of the Camaro and Corvette, which are Chevrolet's two other high-performance offerings. This layout optimizes vehicle balance, and the SS puts only about 53 percent of its 3,975-pound curb weight on its front wheels (in contrast, today's front-wheel drive Chevrolet Impala puts nearly 60 percent of its weight on its front tires). 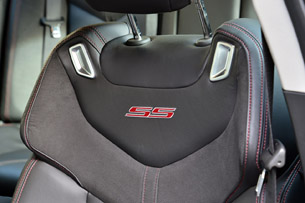 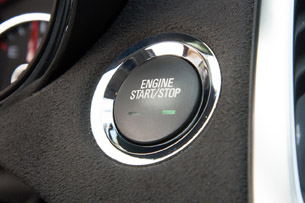 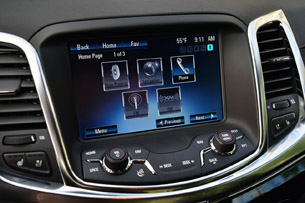 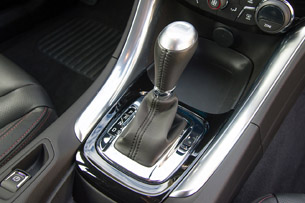 The five-passenger sedan seems to mimic the driving dynamics of an E39 BMW M5.

The SS may share some Camaro and Corvette DNA, but it doesn't drive like either late-model sports coupe. Instead, the five-passenger sedan seems to mimic the driving dynamics of a BMW M5. But not the current F10 chassis – the long-since-discontinued, V8-powered E39 model. That statement is both good and bad. As a compliment, the third-generation M5 was a wonderful sport sedan that was highly regarded as the best in its class during its heyday (1997-2003). It was powerful and tremendously fun to drive. On the negative side, the SS feels a bit traditional and heavy with its driving dynamics when compared to today's light-in-their feet and very agile sport sedans.

From a standstill, the SS launches like a muscle car. Foot to the floor, the engine roars and the rear tires claw at the pavement as the sedan punches through the 60-mph benchmark in about 4.5 seconds (lacking proper grip, the Chevy will effortlessly do a burnout until each of its rear tires peel down to the cord and eventually disintegrate). Yet at speed, full throttle application initiates a brief pause in the automatic transmission as it thinks about its next step. Finally, after a downshift or two, the engine roars and occupants' heads are forced against their restraints. While passengers don't actually feel the delay, it's annoying from the driver's seat. Today's best eight-speed automatics – to say nothing of dual-clutch gearboxes – don't act this way. 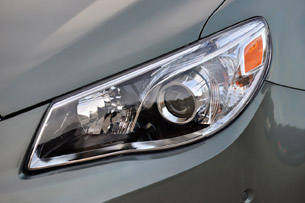 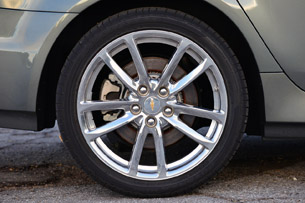 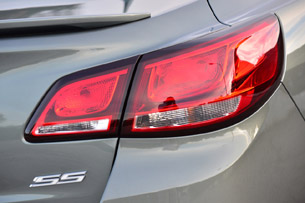 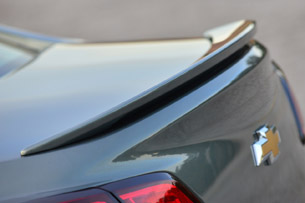 Unrestricted, the SS should be able to go faster than 160 miles per hour.

On the open highway, this Australian covers ground comfortably and quickly. The suspension is firm, and its tuning removes any disconcerting floating feeling while at speed. Unrestricted, the SS should be able to go faster than 160 miles per hour. Its well-mannered demeanor at half that speed suggests those velocities won't affect its stability at all. Its only downside on the highway, when it is plugging along at 70 mph on cruise control, is its fuel efficiency, or the lack thereof. The EPA rates the SS at 21 miles per gallon highway, but I was hard-pressed to break 20 during steady state cruising. That's on the low side considering that most late-model sedans with 400-plus horsepower are squeezing an additional 10-15 percent more out of each gallon of fuel.

The SS's true talent is revealed when the road no longer stretches to the horizon. On high-speed sweepers, the four-door pulls away from trailing traffic as it places its fat and impressively sticky Bridgestone Potenza RE050A tires (245/40R19 front and 275/35R19 rear) on the pavement nearly perfectly. It sets into the corners masterfully, without the slightest bit of drama, and hunkers down with gyroscopic stability. The electric speed-proportional steering is a bit artificial in feel and its ratio is far from aggressive, but it's very accurate in terms of placing the polished alloy wheels precisely where they need to be. Its biggest shortcoming in the corners is a lack of bolstering in the seats, which allows torsos to slide side-to-side under high-G loads. 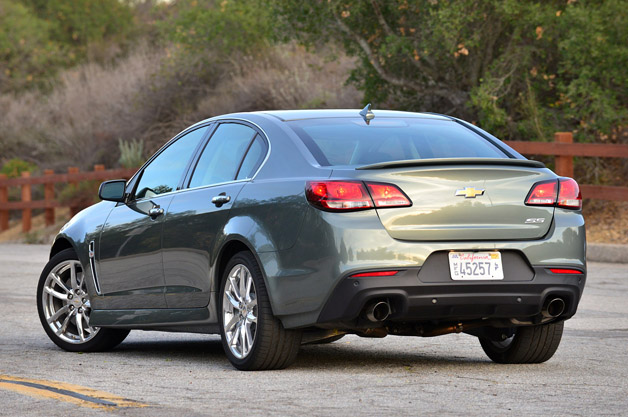 It's far from perfect, but I smiled broadly each time I stepped on the accelerator and the throaty LS3 came to life.

With an LS3 under the hood, the SS doesn't want to do anything but go fast. Yet it stops equally as well, thanks to a braking system designed by Brembo. Up front are four-piston monobloc calipers, with single-piston sliding calipers in the rear. The pedal feels good under all driving conditions, whether it's being asked to slow the four-door from a crawl in a parking lot or haul the two-ton sedan down from highway speeds in a panic stop. They work well all the time, and fade never reared its ugly head, at least in spirited street use.

After a week with the SS, I grew quite fond of the Australian transplant – it's hard not to like a powerful, torque-laden V8 shoehorned under the hood of a rear-wheel sedan with suspension, tires and brakes equally on par. It's far from perfect, but I smiled broadly each time I stepped on the accelerator and the throaty LS3 came to life.

The Chevrolet SS falls short to the competition ( Dodge Charger SRT8, Chrysler 300 SRT8 and Cadillac CTS Vsport) in terms of power and styling, but it has them beat on price. Taken as a whole, the SS comes across as a polished, and very well-rounded, sport sedan package that is more focused on performance than the others. While the competitors battle things out with the latest appearance packages, technical innovations and luxuries, the Aussie import doesn't see the need to impress anyone but the few thousand who will take it home. 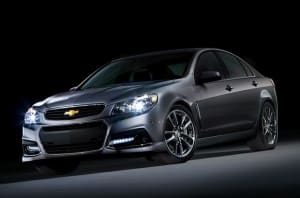