There is a new vehicle that you should keep an eye out for when you're going a little too fast down the Interstate. Ford's Explorer-based Police Interceptor Utility was the bestselling new law enforcement model in the country last year, and signs show that won't be changing anytime soon.

Ford sold 14,086 Interceptor Utilities in 2013, up 140% from the year before, and 10,897 Interceptor Sedans, up 31%, according to USA Today. Overall, the brand's police sales were up 48 percent, and they were enough to boost the company's law enforcement vehicle market share by 9 points to nearly 50 percent.

The success comes just a few years after it made the decision to finally retire the long-serving Crown Victoria-based cruiser for two more modern vehicles. "We had to reinvent the category," said Chris Terry of Ford Communications to Autoblog. The automaker had to convince police departments that a unibody chassis without a V8 could perform better than a model that had been a law enforcement staple for years.

The keys to the transition have been the Utility's space, performance and standard all-wheel drive. The truck's extra storage space has been welcomed by officers who are being asked to be first responders in many situations, and the EcoBoost version has been the fastest in its class the last three years of testing by the Los Angeles County Sheriff Department. Plus, even in places that don't experience much inclement weather, the added traction from AWD is an advantage.

According to Terry, when Ford introduced the new emergency vehicles, it expected sales to be split roughly 50-50 between the Explorer and Taurus. But at times it "has run as high 70 percent Utility." The company appears to have read the market well. As more law enforcement agencies drop their aging Crown Vics, the Blue Oval has replacements at the ready. 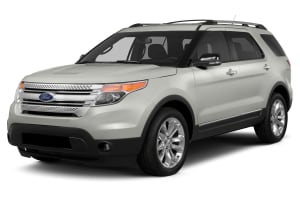