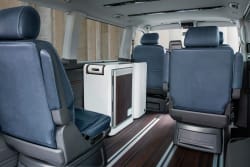 Volkswagen dug into its commercial vehicle fleet for its latest Geneva Motor Show concept, blending the versatile body of the T5 MultiVan with a luxuriously appointed interior, 4Motion all-wheel drive and a thrifty diesel powertrain.

That 177-horsepower diesel engine routes its power to the AWD system through a seven-speed dual-clutch transmission. Based on that alone, we'd expect the Multivan Alltrack's behind-the-wheel experience to be somewhat familiar. That all-wheel-drive system and van body contribute to the 21-degree approach and 15-degree departure angles of this soft-roading MultiVan.

What wouldn't be familiar is its exquisite cabin. Volkswagen opted for a nautical theme for the concept's interior, featuring grey-blue leather seats from Poltrona Frau and a floor finished in real wood. The dark wood trim can also be found throughout the interior, running below the windows and on the dash.

The exterior, meanwhile, is more or less a T5 MultiVan body with unique front and rear bumpers that are finished in shade of grey that contrasts nicely with the Moonstone Mother of Pearl paint. 19-inch alloys also add a bit of flair to the traditionally utilitarian body of the MultiVan.

All fuel consumption and performance data cited in this press release are predicted figures, as at March 2014.

All terrain: concept vehicle combines stylish nautical design with rugged off-road features
Hanover / Geneva, 4 March 2014. Supreme, effortless ease is the key to freedom. The Multivan Alltrack is an outstanding example of this, as it really is superbly equipped for any task and every route. At the harbour, it stylishly tows a boat trailer, in the city it proves a spacious, reliable partner that, thanks to its elegant exterior, is not out of place even in front of the opera house, and by virtue of its spacious interior it also provides room for any shopping trip. Finally - thanks to 4MOTION all-wheel drive and off-road technology - the Multivan Alltrack is just as much a master of winding roads as it is of off-road terrain.

The idea. Multivan Alltrack – the name speaks for itself. A vehicle for all roads and any track. And above all: a Multivan. Its flexibility is legendary. That and its numerous features ensure that every conceivable task and any associated luggage can be handled with ease, thus making it suitable for even the most demanding of transportation tasks. The design of the Multivan Alltrack from Volkswagen Commercial Vehicles differs significantly from other models in the market for workhorse vehicles by its high-gloss turned 19-inch wheels, precisely implemented details of the exterior skin in "Moonstone Mother of Pearl Effect" colour and the sophisticated impression of the interior.

Well equipped. The robust front and rear bumpers offset in grey and with integrated underbody protection in matt silver contrast with the discrete, elegant exterior, as do the wheel arches, protective side strips and boot sill protector. This apparent contradiction is intentional - a metaphor for the two worlds of the Multivan Alltrack: turning in a first-class performance both on the road as well as off it. This concept has also been consistently transferred into the interior. It features high quality, durable materials with great functionality and the rugged charm of a widely travelled globetrotter: Finely stitched grey-blue seats of the finest natural leather by the Poltrona Frau brand form a contrast to the dark brown genuine wood boat floor produced in "vinterio technology". The hand-width decorative trim strip beneath the window's edge that is framed in aluminium is also made of this porous material. This trim strip runs at hand-rail height along both sides right into the cockpit, thus forming a visual link with the central, easy-to-see infotainment system. Its functions are accessed via a capacitive 8-inch touchscreen.

Key aspects
the desired sound quality in the vehicle is a Dynaudio Surround Sound system with a centre speaker.
A sturdy floor track system contributes to the tremendous versatility in the use of interior space. Besides serving as a base for movable individual seats in the Multivan Alltrack, it can also be used to securely mount a mobile kitchen module, which may be located either on the left side of the vehicle or behind the front seats – perpendicular to the direction of driving. Along with a cooling box, the module, which is easy to install or modify, also provides a gas cooker and sink with fresh water tank. It can be individually removed for use outside of the vehicle, or the entire module can be stowed in the garage if it will not be needed during an upcoming journey.

At home off the beaten track. Of course, the Multivan naturally has more than just a striking appearance. The drive train gets its power from a strong engine, too, a 2.0 TDI (132 kW/180 PS), and transfers it to the Haldex multi-plate coupling mounted to the rear axle. It has an approach angle of 21° and a departure angle of 15°. Together with its solid 19-inch alloy wheels it is ready to tackle extraordinary tasks.

Built to last. Volkswagen Commercial Vehicles is underlining with the Multivan Alltrack the enormous potential of this classic vehicle: built in the state capital of Lower Saxony, the founder of this market segment continues to be the vehicle by which all others in the class are measured. The combination of reliable quality, efficiency, flexibility and not least classless appeal stands for everything that customers value about their Volkswagen MPV. And have been valuing for six decades and more.

This concept vehicle also emphasises Volkswagen Commercial Vehicles' many years of all-wheel drive expertise: this began 29 years ago with the T3 Transporter - both as a minibus and a van. For the last five years, the Caddy 4MOTION has been peerless in its market segment. Since 2010, the Amarok pick-up has been setting new benchmarks in its class, with its variants and capabilities being constantly extended. And finally in 2012, the Crafter 4MOTION with all-wheel drive from Achleitner completed the model range.

And this has been done not just for the sake of it, but in response to genuine customer demand: one in every five commercial vehicles sold by Volkswagen in Europe is ordered with all-wheel drive. No comparable manufacturer enjoys such popularity with this technology.